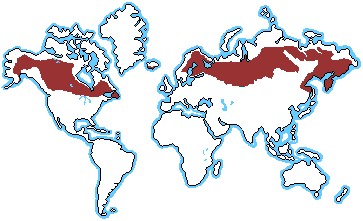 The Taiga climate is very cold. Ther are only 4 months of the year with a temp. over 50 degrees Ferrienheit. Also, the Taiga has year around percipitation which can eaither bring light snow in the winter or heavy rains during the summer months.

The Taiga receives rainfall year around and most of it falls during the summer. The average rainfall is 12-33 inches annually.

Animals have developed thick fur to adapt to the cold climate in the region. The Coniferous trees in the area grow tall and have needle like leaves to prevent snow to break the branches.

This is a bird in the Taiga that eats fish

This is a ferret like mammal that feeds on small animals.

This is a red squirrel...

I dont even know. But its a Carnivore

Grows up to 25 meters tall. Has pinecones and 4-sided needles.

This is an Evergreen, and grows from 10 to 50 ft tall. Grows all over North America and it can grow in any type of soil.

The tree with reddish brown bark can grow up to 27 meters tall and is found in the colder climates around the world.

Thin Barked tree that peels in layers. They grow in clusters and can grow from 60-80 ft tall