Ishmael Beah is returning from preforming in a rap group with his friends and brother discovers that his village has been attacked. The boys evade their home and wander from village to village in search for food and shelter. They find themselves doing things they never thought they could. like stealing food form children. Eventually Ishmael is unwillingly conscripted in the Army. As a child soldier he becomes addicted to cocaine, marijuana, and brown brown. The drugs gave him the courage to fight and the ability to repress his emotions during war times. He became the thing he feared the most, a killing machine capable of doing horible things 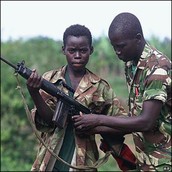