Anthrax is a highly deadly rod-shaped bacteria that is caused by Bacillus anthracis. Anthrax is common among animals, both wild and domestic, (especially ruminents, ie goats, cows, sheep, etc.) and is rare in humans, though it is possible for humans to become infected. Anthrax is not contagious like the flu or common cold.
The bacteria produces dormant spores, which can live outside of a host for decades. The spores are activated when they are ingested by an animal. They then multiply, spread throughout the host, and cause severe illness, and, often even death.
Most animals become infected with anthrax when they eat, drink, or breathe in spores when they come in contact with them in soil, plants or water that can become contaminated.
Like other animals, people become infected with anthrax when they come into contact with spores. This mainly happens when they breathe the spores in, eat contaminated plant or animal products, or get the spores in a scrape or cut.
Anthrax in any form is very rare in the United States, though there are occasional outbreaks. It is most common among larger ruminants, such as cows and deer. Anthrax outbreaks are most common in rural Central and South America, sub-Saharan Africa, the Caribbean, southern and eastern Europe, and central and southwestern Asia.

Anthrax has four main types: cutaneous, inhalation, gastrointestinal, and injection. The type you get depends on how the disease enters your body. They all usually start in one are and then spread throughout the body. Though they are treatable with antibiotics, if they go untreated, they can kill you.
Cutaneous Anthrax:
A person generally gets cutaneous Anthrax when the spores enter through a cut on the skin. This usually happens after a person has been dealing with and infected animal or animal product. The most common places for a person to get this is on the head, neck, forearms, and hands. Untreated, there is an eighty percent survival rate, and if a person gets the correct treatment, then there is a hundred percent survival rate. After one to seven days, the patient begins to show symptoms. Symptoms may include itchy blisters or bumps and a painless skin sore which comes after the bumps/blisters and has a black center. There may be swelling around the sore as well.
Inhalation Anthrax:
Inhalation anthrax is caused when the victim breathes in anthrax spores. People who are at a higher risk of this form of the disease are generally the people who process animal products. This form of the disease is considered the most deadly. Without treatment, only about ten to fifteen percent of patients survive, however, with intensive treatment, the survival rate becomes approximately fifty-five percent. Patients begin to show signs of infection about a week later, but the disease can go undetected for approximately two months. The infection begins in the lymph nodes in the chest and spread to the rest of the body. Symptoms include fever and chills, chest discomfort, shortness of breath, confusion or dizziness, cough, nausea, vomiting, or stomach pains, headache, sweating,extreme tiredness, and body aches.

Gastrointestinal anthrax is the result of eating infected meat that has not been properly cooked. Basically, the whole digestive system can get infected. (Throat, esophagus, stomach and intestines). Patients begin to show symptoms one to seven days after exposure. There is a sixty percent survival rate if proper treatment is andministered, without proper treatment, there is less than a fifty percent survival rate. This type of anthrax is almost nonexistent in the United States. Symptoms include fever and chills, swelling of the neck/neck glands, sore throat, painful swallowing, hoarseness, nausea and vomiting (especially bloody vomiting), diarrhea/ bloody diarrhea, headache, red face and red eyes, stomach pain, fainting, and swelling of the abdomen.
Injection Anthrax:
The symptoms for this type of anthrax are similar to those for cutaneous anthrax. However, there is often a deeper infection under the skin or in the muscle. This type of anthrax is harder than other types to recognize and treat, because a lot of other diseases can cause infections at the injection site. This type of anthrax has only been caused by contaminated needles of people who do drugs, especially heroin. It is most common in Northern Europe and there has never been a case of this type of the disease in the United States. Symptoms include fever and chills, small blisters/bumps that may itch at the injection site, a skin sore similar to the one that people with cutaneous anthrax get, swelling around the sore, and abscesses under the skin or in the muscle where the drug was injected. 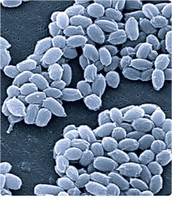 Anthrax is very deadly, but can be prevented and treated.

All forms of anthrax can be prevented and treated.
An antibiotic can be used to prevent anthrax after a person has been exposed, but before they begin to show symptoms. Anthrax can be dormant in a person for up to sixty days, so that is how long they have to take the antibiotic. The two most common antibiotics used are ciprofloxacin and doxycycline.
A vaccine has been created to prevent anthrax, but it is not available to the general public because anthrax is not a widespread disease. The only people who use the anthrax vaccine are people who work with anthrax in the laboratory, some people who work with animals who are prone to anthrax, and some people in the military. The vaccine only protects against cutaneous and inhalation anthrax.
Anthrax is diagnosed using cultures from infected tissues.

The point of a bioterrorist attack is to release some sort of germs over a population to sicken or kill them, livestock, crops, wildlife, etc. Anthrax is the ideal disease to use in one of these attacks because it is easily accessable, can be grown in a lab, and can last outside of a living host for a long time. Also, it can be used very easily without anyone knowing. It would be all too easy for a terrorist to slip anthrax powder into our food, our water, etc. and could simply be dumped anywhere (out of planes, cars, boats, etc.), where it would travel around infecting hundreds if not thousands of people. This sort of attack could even go undetected until anthrax became widespread in the country, and even then, it would be very difficult to find the culprit. In fact, the largest anthrax threat today is of this kind of attack.
This sort of terrorist attack is much more quiet and undetectable than the more noted for of terrorism, such as the suicide bombing of the twin towers on 9/11. Another attack, which is much less widely known (Though much less disasterous), happened the same year. Anthrax was made into a powdered form, put into letters, and sent around the postal system. Twenty two people came down with anthrax and five died.
According to a 1993 estimation, if 100 kilograms of anthrax powder (spores) were released near the capitol, it would cause between 130,000 and three million deaths.

For more information, go to www.cdc.gov/anthrax