Almost EVERYONE is or will be affected by depression

Almost EVERYONE is or will be affected by depression 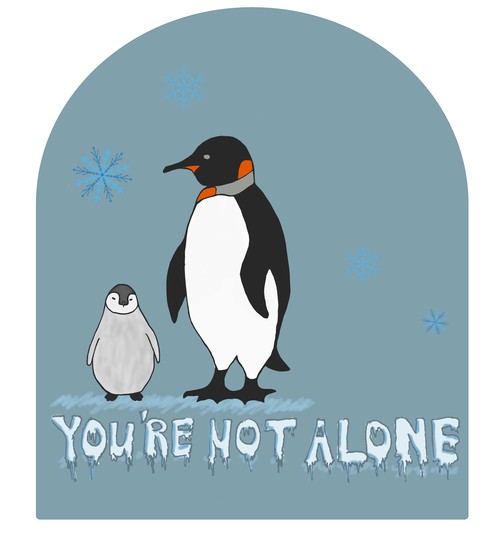 You're Not Alone Video

Hi, our group is called “Breaking the Ice” and our aim is to combat depression and raising awareness about it. Our campaign name is “You’re not alone”. Our campaign will be different from other campaigns as we are going to promote our educational side to schools. This way we will not wait for people to find us, we are going to reach out to them. We will take the first action.

We have chosen many methods to promote our campaign and to let people with depression that they’re not alone, and let people who aren’t depressed realise that they need to learn more about depression and support people in need.

Our mascot and logo is a penguin because of their nature to huddle together to keep each other warm during the harshest of winter storms. Our campaign promotes the idea of ‘huddling’ which is supporting and encouraging each other so that together, they can conquer depression.

Our target audience, young adults and teenagers, spend a large amount of time on social media. Therefore, we have decided to reach out to them mainly through the use of television and via the internet. These mainly include short TV ads shown during breaks between shows popular amongst young people today, which provide information, promotes awareness of the issue, is catchy and has an easy to remember slogan. On the internet, we have set up pages on social media sites including Facebook, tumblr, twitter and google plus. We will also be putting our videos about our campaign onto YouTube to make it widely accessible to everyone, as well and our own website with information, statistics, campaigns and links to other sources of information and help.

Awesome aspects of our campaign:

This TV ad is very short but effective in letting people know how people with depression could be anywhere and you may not know until it is too late. It will also be put up on the internet as said before and shown through social media and well as our website to be widely accessible and serve as an interesting reminder to people about depression and how they can get help. 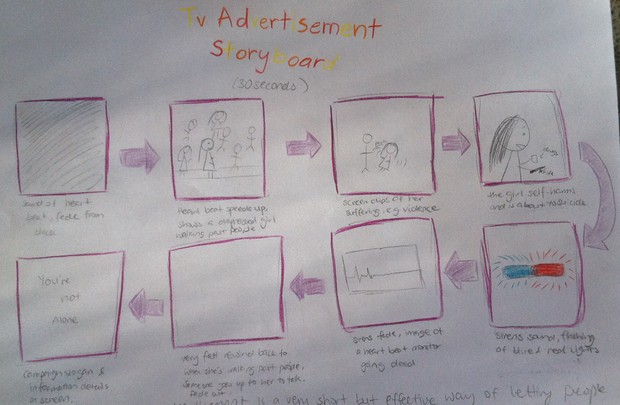 Our campaign’s mascot is a penguin because they are known for their nature of sticking together to keep warm in the cold Antarctic climate. The idea of free hugs is to cheer people up and gives people a break from a busy lifestyle.

Free hugs will be given to the public around shopping centres, busy streets, near schools and other areas where large numbers of people pass by. Someone will dress up in a penguin suit giving out free hugs.

This effectively promotes our idea and slogan of you’re not alone because it shows people that even strangers who you’ve never talked to may be willing to lend a helping hand and help you in times of trouble. People can be encouraged by the kindness of strangers and their willingness to volunteer their time to make other people feel loved.

Along with the free hugs, we will also provide information about depression and our campaign by handing out brochures, pamphlets, and business cards etc.

Throughout the process of giving out free hugs, another person will call out our slogan, ‘you’re not alone’ and ‘free hugs!’ to attract attention and brighten up people’s day, to prevent the chances of depression. 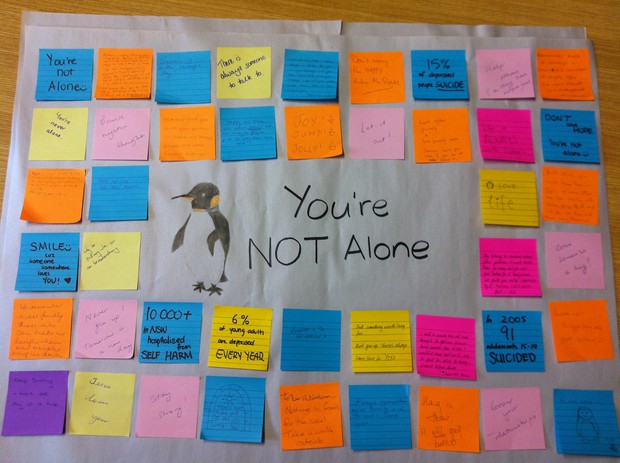 In order to raise awareness about our campaign, we will be using sticky notes. We will have two different posters stuck up for people to see. On the first one, we will have a collage of the sticky notes with inspirational messages that others have written to encourage depressed people. By sticking them up, it will immediately grab people’s attention and once they read the messages, they will be able to realise that there are people out there to help them. The second poster will be blank and people are welcome to write messages and stick it up to also get involved in helping and raising more awareness about the seriousness of depression. This will also encourage people to act to help those in need and make sure they do not become depressed themselves.

Our campaign posters are based on the popular ‘Keep Calm’ posters commonly seen on social media and the internet. This again effectively attracts the attention of our target audience as young people like and will notice these more often than much older or much younger audience.

We have created seven of these posters, one for each colour of the rainbow, as rainbows represent happiness and a glimmer of hope during a storm.

These posters will be places in strategic locations where a lot of people will see them, such as bus stops, train stations, shopping centres, schools etc. These locations are often passed by or used by young people and will be particularly notices as the ‘Keep Calm’ posters are popular, bright and simple. Through these posters, we hope that we can make people relax and take a break from their busy lives.

The billboard advertisements are for displaying on public billboards as well as other public areas such as shopping centers and schools. The aim of these ads is to promote awareness of our campaign. They feature an image along with our campaign slogan ‘you’re not alone’ across it. underneath the slogan there will be some brief statistics to quickly inform the view about the magnitude of the issue, thus attracting their attention. At the bottom, there will be a link to our website should the viewer want to find out more about us. It is hoped that these advertisements will help promote our campaign and further engage our target audience. 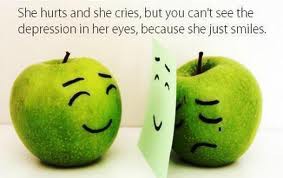 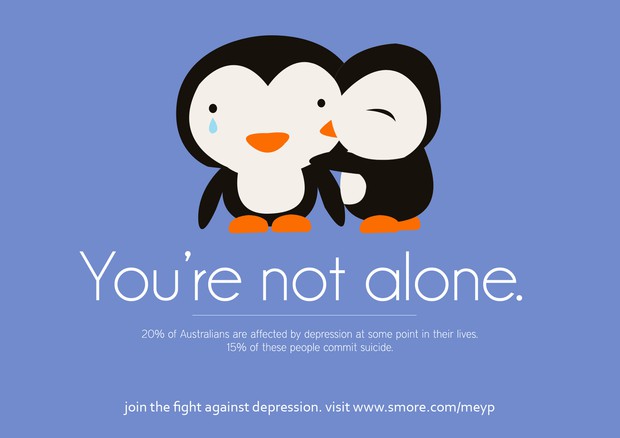 Our educational brochure gives an insight into who we and what we do as well as some information on what stress and depression is and a list of groups that young people can go to for help. Penguins are used in this brochure in keeping with our mascot.
Embed code is for website/blog and not email. To embed your newsletter in a Mass Notification System, click HERE to see how or reach out to support@smore.com
close