Of Giants and Ice

Of Giants and Ice 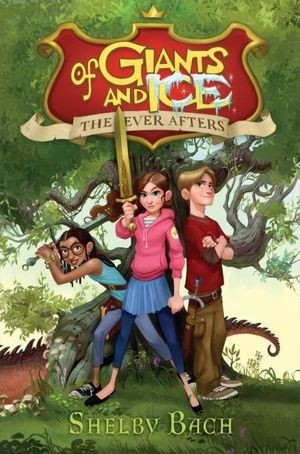 Attention has followed Rory Landon all of her life. Such attention is the fault of her parents. With a famous actress and a director for her parents, it was pretty much unavoidable. Rarely is anyone interested in her for her own sake, especially when her mom's shooting schedule and preference for filming on location has made her a perpetual new kid. So when an after school program known as the Ever After School actively pursues Rory for their program in North Carolina, it is an oddity for Rory.

She quickly discovers that isn't the only oddity about the program. The adults there dress as if they are in medieval costume. No one reacts to Rory's name. She learns the woman who recruited her had a two hour long meeting about Rory before she arrived. An annoying boy asks Rory if her dad is an Aladdin. Now she's being rushed along on an excursion with other students at EAS before she's even had so much as an orientation. Nothing makes sense, least of all the fact that she's suddenly cornered in a cavern by a living dragon.

It turns out the Ever After School is a training program for kids who are Characters waiting for a tale to find them. Will Rory ever be able to learn enough to catch up, and--more importantly-survive? Will she ever be able to tell her mom what she really does after school? Danger comes crashing all around when Rory's new friend Lena is given a quest. Lena picks Rory and Chase, an insufferable boy who rubs in Rory's failings, to accompany her up a magic beanstalk.

"On my first trip to Yellowstone National Park, I threw a rock at a dragon. It wasn't my smartest idea." (Shelby Bach, Of Giants and Ice, p. 1).