Causes of the Bombing

All of this started because of a revenge attempt when Japan bombed Pearl Harbor. The United States wanted to force Japan's surrender as quickly as possible to minimize American casualties. They also needed to use the atomic bomb before the Soviet Union entered the war against Japan to establish US dominance afterwards. The United States wanted to use the world's first atomic bomb for an actual attack and observe its effect.

The day of the Bombing

On August 6, 1945, during World War II (1939-45), an American B-29 bomber dropped the world’s first deployed atomic bomb, "Little Boy", over the Japanese city of Hiroshima. The explosion wiped out 90 percent of the city and immediately killed 80,000 people; tens of thousands more would later die of radiation exposure. Three days later, a second B-29 dropped another A-bomb, "Fat Man", on Nagasaki, killing an estimated 40,000 people. 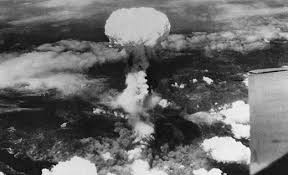 "Little Boy" was the code-name for the type of atomic bomb dropped on the Japanese city of Hiroshima on 6 August 1945 by the Boeing B-29 Super fortress Enola Gay, piloted by Colonel Paul W. Tibbets, Jr., commander of the 509th Composite Group of the United States Army Air Forces. In this gun-type device, the critical mass is achieved when a uranium projectile which is sub-critical is fired through a gun barrel at a uranium target which is also sub-critical. The resulting uranium mass comprised of both projectile and target becomes critical and the chain reaction begins. Dropped on the Japanese city of Hiroshima on August 6,1945, it was the first nuclear weapon used in a war. Explosive force: 15,000 tons of TNT equivalent.

"Fat Man" was the code-name for the type of atomic bomb that was detonated over the Japanese city of Nagasaki by the United States on 9 August 1945."Fat Man" was the second plutonium,, implosion-type bomb. The first was the "Gadget" detonated at the Trinity site on July 16, 1945. In the implosion-type device, a core of sub-critical plutonium is surrounded by several thousand pounds of high-explosive designed in such a way that the explosive force of the HE is directed inwards thereby crushing the plutonium core into a super-critical state. Dropped on the Japanese city of Nagasaki on August 9,1945, it was the second nuclear weapon used in a war. Explosive force: 21,000 tons of TNT equivalent. 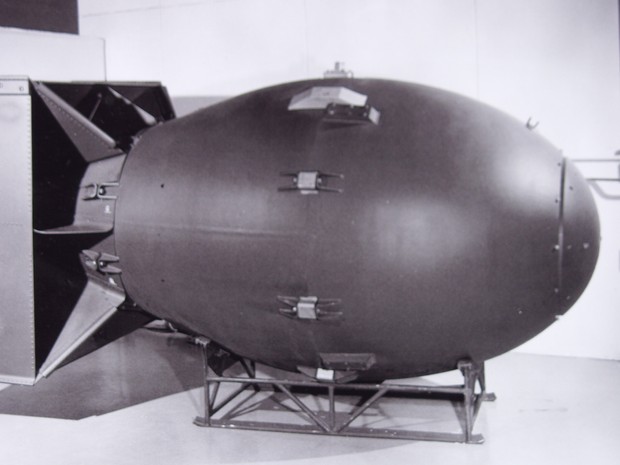 On 6 August 1945, the US dropped the first atomic bomb on Hiroshima and three days later a second on Nagasaki. With that and the Soviet declaration of war on August 8, the Japanese were forced into a surrender that was virtually unconditional.The surrender of the Empire of Japan was announced by Imperial Japan on August 15 aboard the USS Missouri in Tokyo Bay, and formally signed on September 2, 1945, bringing the hostilities of World War II to a close. By the end of July 1945, the Imperial Japanese Navy was incapable of conducting major operations and an Allied invasion of Japan was imminent. The Japanese navy and air force were destroyed. 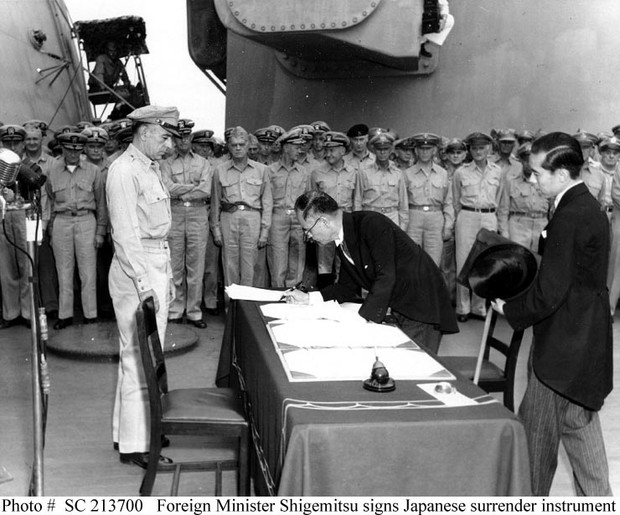