Charles Bukowski was born in Andernach, Germany August 16th, 1920. Bukowski ended up moving to the United States at the age of two. His father, who was an American soldier, disciplined Charles on many occasions for little offenses. He also had a very poor social life in his younger age, boys his own age would bully him and he would get rejected by girls all the time because of his figure. At the age of 13, he wrote his first poem, "Ciotti". It stated about his first time drinking alcohol out of his friends fathers wine cellar. He stated "Why hadn't someone told me". He began to attend Los Angeles City College in 1939 but dropped out at the beginning of World War II to move to New York to become a writer. After a few years of receiving many rejection slips, he gave up writing and began to drink heavily for the next ten years. After He was close to death from the drinking, he took up writing again. He then wrote about forty books of poetry and novels. He later died of leukemia in 1994.

Blue Bird is a poem that is about Charles Bukowski's rough life. I think that this poem signifies that on the outside he is nonchalant and on the inside, he is depressed and lonely. There is a blue bird that wants to show itself but he doesn't let it out but instead drowns it with the alcohol and smoke. He only lets it out at night sometimes when everybody is asleep. He uses allusion very good because the bird is representing his softer side. He also uses irony because he seems to be a man with no morals in in this poem he seems very emotional.

And the Moon And the Stars And the World

In this poem, I think that the poet gets a satisfaction from walking at night and seeing the true side of people. As he walks, he peeks in through windows to see the wives argue and fight with their drunk husbands. He also likes to see the dark side of people. He uses Hyperbole well because he exaggerates the wives and husbands fighting. 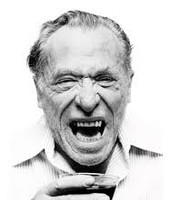 Bukowski talks about a girl he is probably dating at the time and is thinking about how lonely he would be without her. He describes their love life and how beautiful she is. He talks about a knife as a metaphor for a painful jab at someones emotions. He says she can't have the knife but he can, he just hasn't used it yet. He uses the knife as a metaphor for an emotion.

A Poem for the Playgirls of the Universe

Bukowski talks about what kind of women he would prefer. He says that he would prefer a more pure lady but he knows virgins are rare but he doesn't want one with too much experience. He uses imagery very well in this poem to describe the kind of women there are out there.

Follow Jacob Hand
Contact Jacob Hand
Embed code is for website/blog and not email. To embed your newsletter in a Mass Notification System, click HERE to see how or reach out to support@smore.com