An Optics and Acoustics Genius

An Optics and Acoustics Genius

Who is C.V. Raman

C.V. Raman was born November 7th, 1888. He went to school At Presidency College at University of Madras, where he earned his masters degree in physics. Studying the scattering of light in various substances, in 1928 he found when a transparent substance is illuminated by a beam of light of one frequency, a small portion of light emerges at right angles to the original direction, and some of this light is of different frequencies than that of the original beam of light. This is now know as the Raman Effect, named after it's discoverer.

C.V. Raman wrote a biography discussing his life and his education in physics.

C.V. Raman was knighted in 1929, and in 1933 he was moved to the Indian institute of Science, at Bangalore, as the head of department physics. His full name is Sir Chandrasekhar Venkata Raman.

C.V. Raman married Lukasundari in 1907 and had two sons named Chandrasekhar and Radhakrishnan. His religion was agnostic. In 1944, Raman retired from the Indian Institute of Science and established the Raman Research Institute in Bangalore, Karnatika a year later. He served as the director and remained there until his death in 1970, at the age of 82. C.V. Raman was the paternal uncle of Subrahmanyan Chandrasekhar. Chandrasekhar won the Nobel prize in physics as well, in 1983. Near the end of October, He collapsed in his labratory when then valves of his heart had givin way. He was brought the the hospital where the doctors had givin him 4 hours to live. He requested he die in the gardens of the academy surrounded by flowers. Before he died, he told one of his former students, "Do not allow the journals of the academy die, for they are the sensitive indicators of the quality of science being done in the country and whether science is taking root in it or not." 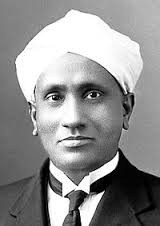 C.V. Raman as a younger man working as a teacher at the University of Calcutta.

Raman was inspired and fascinated by a book he read by a German scientist Helmholtz. the book was called The Sensations of Tone. At the age of 11 Raman was accepted to his university and graduated at the age of 15 years old. He was the youngest person to be in first class. He broke all previous records at such a young age. In 1907, Raman later became an accountant at the Finance Department of the Indian Government. He resigned to teach as a professor at the University of Calcutta in 1917. In 1921, Raman was awarded the degree of 'Doctor of Science' by the university of Calcutta and in 1929; the British Government of India conferred him with the title of 'Sir'. Then, in 1930, Raman won the Nobel Prize for Physics for the Raman Effect.

Follow M Leahy
Contact M Leahy
Embed code is for website/blog and not email. To embed your newsletter in a Mass Notification System, click HERE to see how or reach out to support@smore.com
close