Tom is using Smore newsletters to spread the word online.

Get email updates from Tom: 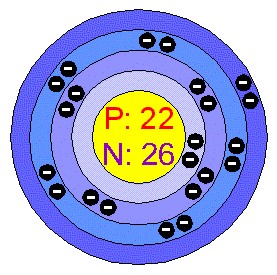 My family, Zirconium, and Hafnium are sooo cool. We are all Transition metals! So obviously we are all metals.

I don't really react much, but i do rust when exposed to oxygen.

William Gregor was was a British scientist who discovered me in 1791!

How Gregor found me

Gregor was studying a piece of earth when he noticed something oddly shiny... and it turned out after further studying, to be me.

I'm found within earths crust and am fairly abundant.

Where you can find me!

I am found in nearly all metal construction equipment, but I'll just name a few. Drill bits, welding pipe, and screws.

I am also found in a lot of of jewelry!

Me and my families electrons!

Me and my family all have 4 valence electrons, so you would think that we would be pretty reactive, but since we're all transition metals, we hardly react at all! All we do is rust!

Martin Heinrich Klaproth was the guy who named me!

Many surgical implants are made out of me!

Tom is using Smore newsletters to spread the word online.