Say "No" to Gun Bans

Say "No" to Gun Bans 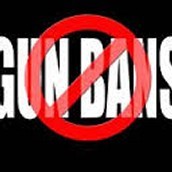 Gun restrictions are surface level solutions to the true underlying problems. As American's, we must protect our second amendment rights and ensure that they are not taken from us. The regulations being put in place by the federal government are not fixing the real issues. No matter what kind of bans we put on guns, crimes will still occur. These laws only hurt the law abiding citizens of this country and not the real criminals.

How Will We Protest?

Come to Capitol Hill at around 2:45PM. We do not want any more gun bans and we want to reverse the passed legislation that is restricting our rights, as free citizens, to bear arms and protect ourselves and our families. To do this, we will gather the first group in the Capitol Building under the guise as a single tour group. When we gain access to the Senate and House Chambers and the Rotunda we will announce our intentions and barricade the entire area. Remember, this is not to be a violent protest, no weapons will be present and no one will be attacked. We simply want to disrupt the government function enough to make our point and then leave. Outside other groups will begin marching and making our message known.