The Gates to Hell

The Gates to Hell

Some people may not know but there was a major difference between a regular concentration camp and an extermination camp, or death camp. While the concentration camps had a number of purposes, from a wide variety of forced labor on the Jews, the Death camps one and only purpose was to exterminate the Jews. 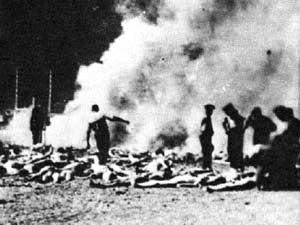 www.holocaust-education.dk
The Death camps were designed for mass murder of the Jews, and were the direct cause to the deaths of millions of innocent people. Jews sent here died from gassings, starvation, disease, exhaustion, physical brutality, and a wide variety of other executions.

Why didn't anyone do anything right away?

Well sadly most people didn't know what was going on within the walls of these camps. The Nazis advertised the concentration camps as a place where the Jews were safely kept in as prisoners during the war. Films created by the Germans showed the Jews sleeping in warm areas, eating lunch together in a dining hall, smiling and laughing as they watched their children play on the playgrounds. None of this was real.
Jewish Survivor Chaim Melcer remembers Sobibor death camp
This video recounts how a Jewish man and a survivor of the holocaust saw his hometown taken over by the German forces as they built a death camp rift before his eyes. He recalls some of his neighbors having to build the gas chamber and the crematorium which ironically and sadly, is where they met their fates right after finishing.