"The Father of Genetics" 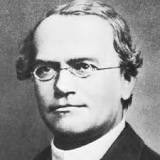 Mendel was known as the "father of modern genetics," he was born in Austria in 1822. Gregor Mendel discovered the basic principles of heredity through experiments in his monastery's garden. His experiments showed the inheritance of certain traits in pea plants followed certain patterns, which ended up becoming the base of genetics and the study of heredity.

The Early Life of Mendel

Mendel was born on his families farm in Austria in the year of 1822. Mendel's parents were very poor, but found ways because they believed Mendel was worth the money to educate. That was until Mendel's father got into a serious farming accident. In 1843 Mendel decided it would be a good idea to move into a monastery in Bruno Austria, which was good for him because it basically sent him to college for free.

The Beginning of Genetics

In 1854, Mendel began to research the passing of hereditary traits in plants. During Mendel’s studies, it was a genetic fact that the traits of the offspring of any species were the mixing of whatever traits were present in the “parents.” the studies showed that oftenly they changed by the relatively short period of time during the experiments, where Mendel’s research took eight years and involved tens of thousands of individual plants.

Basic Facts of Genetics and Heredity