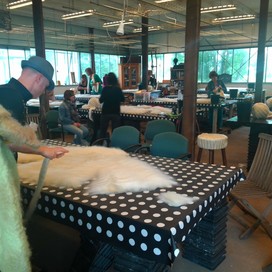 Get email updates from Fiber:

Jorie Johnson from Japan is always searching for more subtle yet complex design capabilities with the voice of wool, and the character of the auxiliary materials chosen to incorporate with it. This class will review various uses of each phase of processed wool, from staples and roving to yarn and prefelt for concise and easy application of design elements. In other words, what kind of marks can we make with each material. We will also enjoy degumming and dyeing silk auxiliary fabrics to supplement the felt expression we choose to make. Plus experience the use of a shades of Sumi ink and the depth of Persimmon Tannin Juice.

Working in pairs, we are going to hot scour and de-gum, silk organza while simultaneously achieving patterns by clamp and tied resists; and dye or over-dye these silk fabrics to make a personal palette with MX dyes. After accumulating experience and a variety of fabric samples we will work through combining wool marking and patterned fabrics into a personal felted item such as a beret, neck wrap, sample for a larger project, or artwork for a frame.

Points to be introduced (summary)
A. De-gumming/scouring of silk
B. Silk can be over-dyed and/or shibori tie-dye the fabric
C. Working with the traditional Japanese Sumi ink
D. Making a traditional Soy Milk Bath
E. Working with fermented Persimmon, called "Kakishibu,"
F. Categorizing marks by processes of the wool fiber, then, felting samples and/or final product 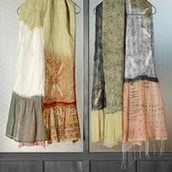 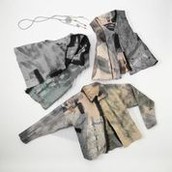 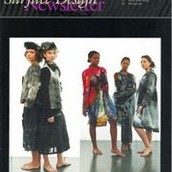 Who is Jorie Johnson

Raised in Boston, USA, in the home of a wool and fiber merchant, Jorie Johnson studied textile design for industry at Rhode Island School of Design (USA) and in Finland, where she was first introduced to Scandinavian felt boot-making in 1977. She opened her design studio, Joi Rae Textiles, in South Boston on the same Summer Street that was home to many of New England’s fiber brokerage firms. Returning to Finland for more study, teaching, and exhibiting really was the start of her world travels seeking information about the rediscovered technique of the Central Asian nomads still actively producing felt.

Jorie was among the artists exhibiting in the exhibition Fashioning Felt at the Cooper-Hewitt National Design Museum, NYC (with accompanying catalogue 2008) and in the San Francisco de Young Museum’s Artwear: Fashion & Anti-Fashion show (accompanying publication by Thames & Hudson, 2005). Her work is in the Textile and Costume Department of the Victoria & Albert Museum in London, Museum of Fine Arts Boston, deYoung Museum San Francisco and The Denver Art Museum. She has lead workshops in private studios and has been an invited tutor at many of the international felt and textile conferences including Hungary, Finland, Norway, Sweden, Denmark, Holland, Republics of Georgia, Mongolia, and Kazakhstan, Canada, Australia, China, USA and Japan since 1986.

At the end of the Silk Road to the east she has received Japanese industrial awards for her unique felt fabrics and her work has been published in Surface Design Journal, Fiberarts Magazine, Shuttle, Spindle & Dyepot, Felt Matters, verFilzt Und zugeNäht, as well as, other European and Asian publications. Since arriving in Japan 25 years ago she reopened her Joi Rae Textiles Studio, which produces hand felted body wear, accessories, hats, items for interiors and fine art works. In Japan she is an adjunct university lecturer, invited researcher for the Shoso-in Office of the Imperial Household Agency Collection and an international Ambassador of sheep, wool, and felt.

And the co-authored book Fabulous Felted Scarves was first published in hardcover in 2007 by Lark Books/ Sterling Publishing, USA.

Follow Fiber Fusing
Contact Fiber Fusing
Embed code is for website/blog and not email. To embed your newsletter in a Mass Notification System, click HERE to see how or reach out to support@smore.com
close