The Fox on four legs

The Fox on four legs

The Arctic fox is a unique animal. They truly have an amazing habitat, interesting characteristics, and a dynamic food chain. These amazing animals are much like wolves, dogs, coyotes, and jackals. There are many different names other than Arctic fox. One of the many names is the Alopex Lagopus, which means “Hair-footed fox”.

Arctic foxes have amazing features. Its dense and thick fur coat protects it from the cold weather. The Arctic fox also has the ability to change colors with the seasons. During the winter the white fur helps them blend into the snow making them almost invisible. Though their fur doesn’t always stay white. During the summer its fur changes again into a bluish brown to maintain camouflage.

If you ever visit a place like Scandinavia, Norway, or Iceland, be on the lookout for Arctic foxes. Arctic foxes live in cold regions such as the outer edges of Iceland, Canada, or Alaska. These animals live in treeless terrains and often dig out holes in the side of a mountain, cliff or riverbank. With their thick fur coat during the winter Arctic foxes can survive temperatures as low as -50 degrees! 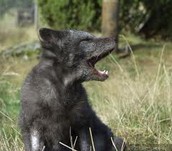 This is a lemming and lemmings are Arctic foxes favorite food

There are many more things to learn about the arctic fox like what it eats, where it lives and what they look like. The Arctic fox may not be a popular animal but it is a very unique one, most people don’t know anything about them.