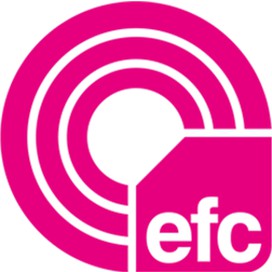 EFC is using Smore newsletters to spread the word online.

Get email updates from EFC:

At Epping Forest College we are committed to driving digital literacy, learning and teaching forward and developing a highly skilled, innovative, entrepreneurial and motivated staff and student cohort and believe in building lifelong skills such as problem solving, creativity, communication and teamwork.

A good example of this is our MAD Digital Challenge!

What is MAD Digital Challenge?

The EFC MAD Digital Challenge objective was to engage learners in proposing new ways of learning, teaching and assessing and improving learner experience cross college through technology. The project was launched during entrepreneurial week November 16th and 33 students proposed a total of 20 ideas. These raised 890 votes of which 508 were valid. The ideas went through two selection processes: minimum number of votes and a panel with selection criteria. The 5 shortlisted ideas were invited to present at a Dragon’s Den event on January 25th. Our Dragons included two industry professional, our Principal and a member of Jisc.

A proposal has been awarded £2000 to see it to life and is currently being developed until end of July 2017.

Find out more at #MADdigitalEFC

Last May 2016 we received a national call from Jisc to encourage our students to come up with ideas to improve learner experience through technologies. We were unfortunately unable to promote it well enough and no one from EFC applied.

The call being to students from both FE and HE placed our learners at a disadvantage and we decided to run this project internally instead.

A project steering group was setup at the beginning of October 2017. The initial idea was to develop a website following the model developed by Jisc. The purpose of the site was to engage our learners in proposing new ways of learning, teaching and assessing; with the potential to improve Teaching & Learning experience as well as digital literacy at EFC.

We soon realised that developing our own site would require considerable resource investment: staff time being at the forefront. We therefore liaised with our Jisc Account Manager – Catherine Bone, to ask if Jisc would be willing to share their site coding. Paul Bailey raised our awareness of the opportunity to create our in-house eLevator project on the Jisc site. By October 13th the site was created thanks to Paul's guidance and support.

Apply to create your own eLevator: https://elevator.jisc.ac.uk/elevator-application

In parallel to the site development, we brainstormed ideas on Mindmeister to name the project. Once agreed, our Marketing team: Hyun Joo Kim and Richard Loveday developed a logo for it.

We were ready to start promoting the challenge! 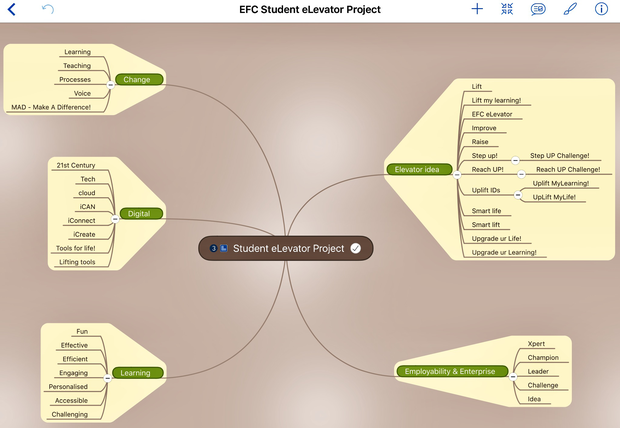 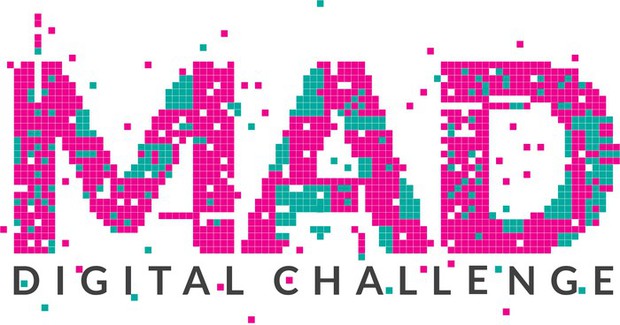 Promotion for the event took place over the course of three stages. Both physical and online communication channels were used to reach the maximum number of students. These include cross college screens, virtual learning environment, ILP, social media, blogs, email, as well as using more traditional communication tools such as posters and flyers.

Our Student Digital Xperts also helped in the dissemination of the call to students and their lecturers while Vikki Liogier approached all curriculum staff for a briefing.

The first step was to raise awareness for the event and inspire all students to create and submit ideas. A strong aspect of this communication was to reassure students that ideas and commitment were key as opposed to technology skills.

A platform on our VLE was also created to support students with the challenge. Including discussion forum, resources to generate ideas, timeline, links, etc... 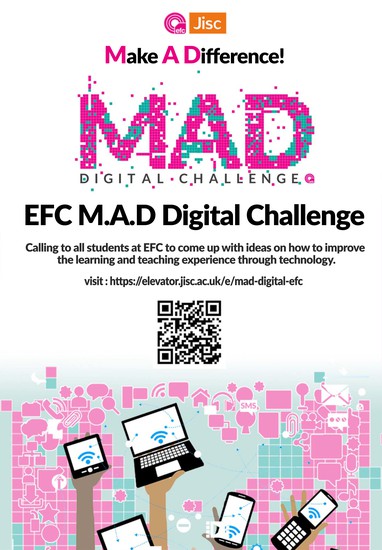 A pdf version of our presentation for curriculum staff and students to download for reference.

We then began inciting both staff and students to review proposals and vote for their favourite ideas. 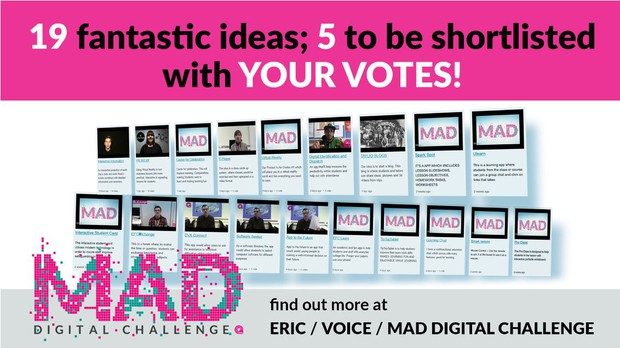 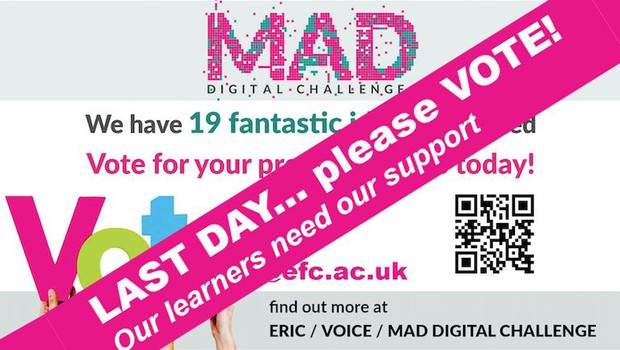 Minimum No of votes to enter our shortlisting process – 25 Votes required from EFC only “…@efc.ac.uk”

o Time constraint – to be developed in 6 months

The third step involved publishing our shortlisted ideas and liaising with all participants to give them feedback on the reasons why their proposals did not make it to the Dragon's Den event stage. Each participant was awarded a MAD Digital Challenge Certificate as well a an 8GB USB key.

The shortlisted candidates received a congratulation note, briefing and offered support and guidance on how best to pitch their ideas.

From a marketing point of view, we promoted the shortlisted idease and the event itself. 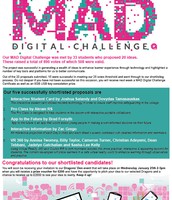 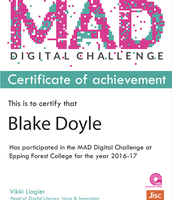 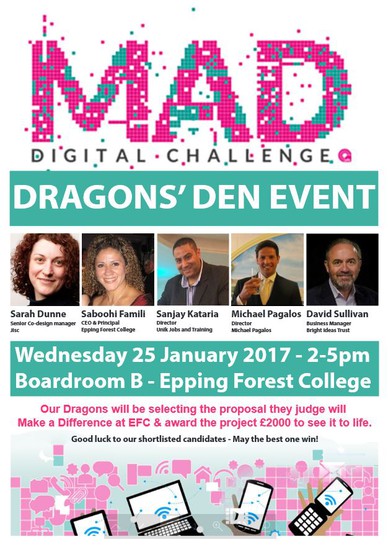 After much deliberation, the winner of the MAD Digital Challenge of 2017 went to Zac Grego’s ‘Interactive Information’ and Brad Forsyth’s ‘App to the Future’ as joint winners with the Judges seeing how the two ideas could be successfully combined.

Saboohi Famili, CEO and The Principal of Epping Forest College, congratulated all the participants:

“It has been very difficult to make decision, Thank you for all the effort you put in. I hope you enjoy the reward of £200 to spend, and I hope it will be spent developing further innovative ideas. You all are
winners and there are other candidates’ ideas we would like to develop further as marketing resources.”

The Principal also thanked the panels:

“We would like to put our hand together to thank the panels and thank Vikki Liogier, none of this would have happened without her.”

Sarah Dunne from JISC encouraged and offered support for the candidates, “I am aware of VR (virtual reality) are taking place, we have some VR experts in JISC if you would like the support.”

The final winning team(s) has been offered funding of up to £2000 to develop their ideas including accessing a package of tools, business support and advice from experts to complete the project in 6 month.

We would like to thank you all who participated in the EFC MAD Digital Challenge and after seeing the quality of this years entrants, we are very much looking forward to running it again next year!

All participants were awarded a MAD Digital Challenge certificate and received an 8GB USB Key. Each shortlisted ideas also received £200 prize to be shared with the team.

The dragons awarded Brad Forsyth' App of the Future and Zac Grego's Interactive Information proposals and suggested that the two ideas are merged into one project that is now in development. The project has been awarded £2000 to be developed.

Below is a collection of photos taken on the day of the Dragons Den event, including some of the contestants and judges. 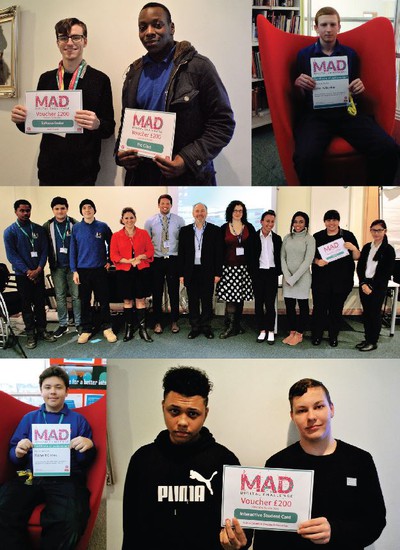 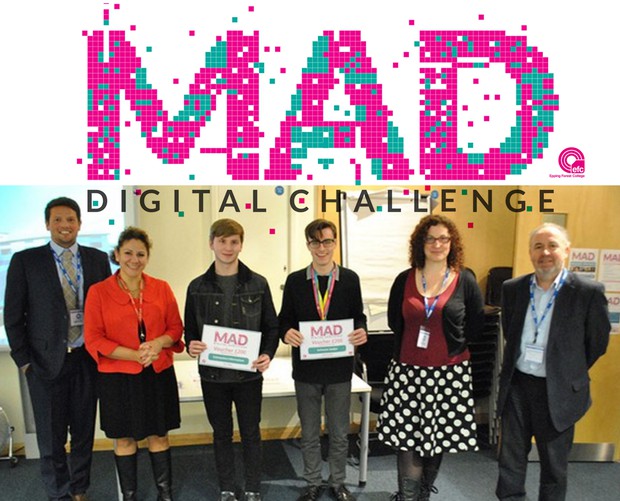 Congratulations to our two winners Zac Grego and Brad Forsyth pictured above with our Dragons.
Presentation for Jisc Change Agent Network CANagogy event #JiscCAN17 at the University of Exeter on 20 April 2017: 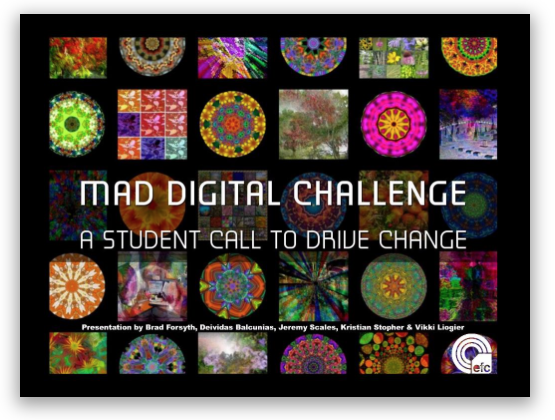 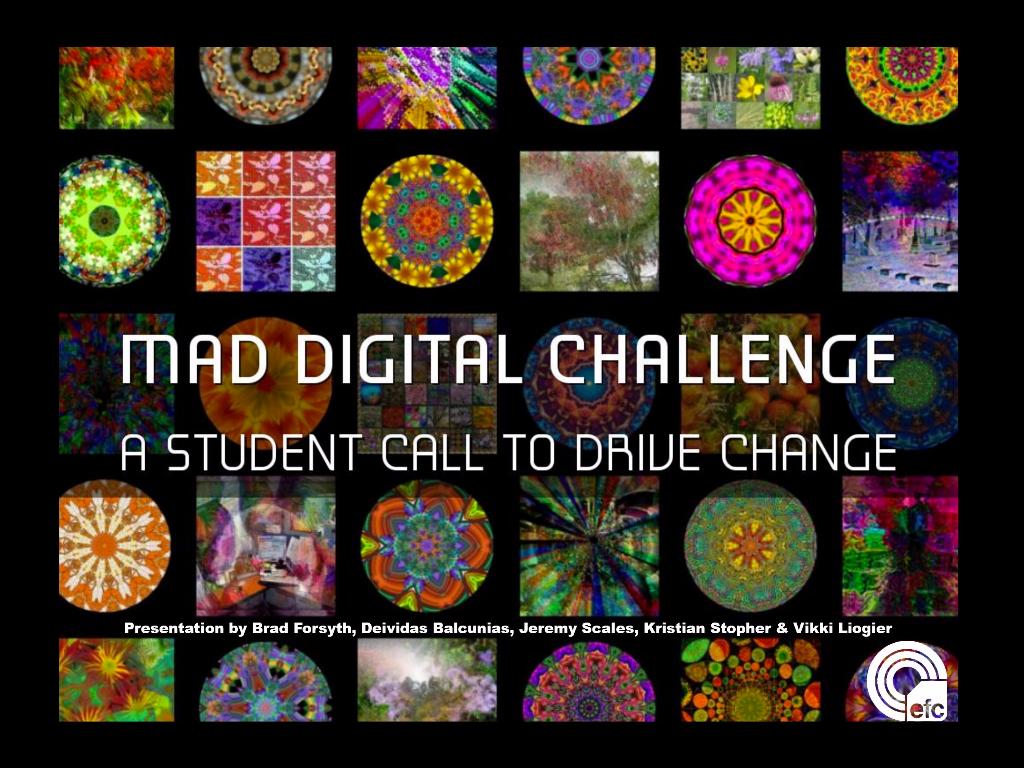 www.haikudeck.com
Presentation for Jisc Change Agent Network CANagogy event at the University of Exeter on 20 April 2017 The EFC MAD Digital Challenge objective was to engage

"This project was a great way to create ideas and innovate around the college. It's really helped me to develop entrepreneurial skills as well as improving my communication."

"Initially it was really daunting but ended up being a fantastic and exciting opportunity filled with creativity."

"When I first heard about the challenge I was terrified!"
- Jeremy Scales

"For a long time I have come up with ideas that I believe have the potential to help others and I was keen to see something be developed into a fully functioning app. As soon as the EFC MAD Digital Challenge came along, I jumped at the opportunity. Through the different stages of the competition I gained some valuable entrepreneurial skills by putting together a strong pitch and using my communication skills to network with those specialising in business. A career opportunity also arose because the panel was impressed with my pitch. Additionally I learnt the process behind making an application and how to promote an idea successfully, gaining the attention of voters."

Want to see more...? Check our photo album on flickr!

www.efc.ac.uk
View our fantastic facilities. EFC is proud of the facilities in our state-of-the-art campus. Click here to see what we have to offer you...

EFC is using Smore newsletters to spread the word online.