Get email updates from Chandler:

Death of Romeo and Juliet

Death of Romeo and Juliet 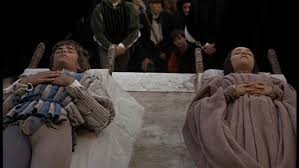 Who is to Blame for Romeo and Juliet's Death

The feud is to blame for romeo and juliet’s death because the feud let both Capulet and Montague hated each other but Juliet was a Capulet and romeo was a Montague and both of there family hated each other and that was how it started. Romeo was desperate for a girlfriend and went to a Capulet party and found Juliet and was in love then they met and had a crush with each other and got married so then tybalt killed mercutio and romeo killed tybalt the same day and then romeo got banish and the Capulet's was mad at romeo and forced Juliet to marry Paris and she was already married to romeo and did whatever she had to do to not do that and friar Laurence gave her a potion and she was asleep faking her death and will wake in 42 hours but the letter didn't get to romeo and bought poison to be with Juliet and but when she woke she saw romeo dead and killed herself with romeo dagger and that the end of them. One reason the feud was in charge of there death is because of the fighting back and forth. From the text it shows that "…Mercutio's soul is but a little way above our heads,/ Staying for thine to keep him company./ Either thou or I, or both, must go with him."(act III, scene i, 126-128). The second reason is that the parents of both side hating each other. From the text it shows that “See what a scourge is laid upon your hate,/ That heaven finds a means to kill your joys with love/…All are punished."(act IV, scene iii, 292-293, 295). In conclusion, the feud is responsible for romeo and Juliet’s death from both sides hating each other and being enemies. 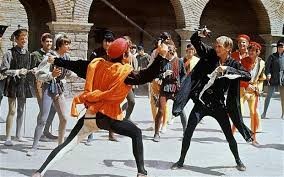