Get email updates from shelby:

As the war-torn nations of Europe faced famine and economic crisis in the wake of World War ll, the United States proposed to rebuild the continent in the interest of political stability and a healthy world economy. George C. Marshall first called for American assistance in restoring the economic infrastructure of Europe on June 5th, 1947. This plan was named the Marshall plan after George C. Marshall.

The doctrine was announced on March 12th 1947 by US President Harry Truman in response to crises within Greece and Turkey. A major part of the doctrine was the policy of containment. The Truman Doctrine was developed in 1950 by National Security Council Report 68 which assumed the Soviet Union was trying to spread its power across the whole world. Truman decided that the US should stop this and advocated a more active, military, policy of containment, fully abandoning previous US doctrines. 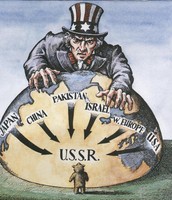 Containment was a foreign policy strategy followed by the United States during the Cold War. First laid out by George F. Kennan in 1947, Containment stated that communism needed to be contained and isolated, or it would spread to neighboring countries.Not everyone saw the adoption of "containment" as a positive development

The communist Regime in china was created in 1921, and under the control of Mao Zedong by 1927. The party controls and oversees many aspects of people's lives, including what they learn at school and watch on TV, even the number of children they are allowed. With more than 85 million members, the Communist party of China is one of the largest political parties in the world. It is a monolithic, monopolistic party that dominates the political life of China.

On June 25, 1950, the Korean War began when 75,000 soldiers from the North Korean Army poured across the 38th parallel. The invasion was the first of the cold war. The North Korean invasion came as an alarming surprise to American officials and as far as they were concerned, this was not simply a border dispute between two unstable dictatorships on the other side of the globe. Although a short lived war, it was exceptionally bloody. Nearly 5 million people died. More than 40,000 Americans were KIA, and over 100,000 were wounded.

McCarthyism is the practice of making accusations of disloyalty, especially of pro-Communist activity, in many instances unsupported by proof or based on slight, doubtful evidence. “McCarthyism” has become synonymous with reckless opportunism, cruel and baseless accusation, and bullying coercion.McCarthyism is unalterably connected to the life of McCarthy himself. When he returned from his much publicized and exaggerated service with the Marines in World War II, McCarthy decided to enter politics and won a campaign as circuit judge at the age of 29.

The Bay of Pigs invasion begins when a CIA-financed and -trained group of Cuban refugees lands in Cuba and attempts to topple the communist government of Fidel Castro. The attack was a failure. Fidel Castro has been a concern for the United States since he seized power in Cuba in January of 1959. Castro’s attacks on U.S. companies and interests in Cuba,Cuba’s movement toward a closer relationship with the Soviet Union led U.S. officials to conclude that the Cuban leader was a threat to U.S. interests in the Western Hemisphere. The failure at the Bay of Pigs cost the United States dearly. Castro used the attack by the “Yankee imperialists” to solidify his power in Cuba and he requested additional Soviet military aid.

During the Cuban Missile Crisis, leaders of the U.S. and the Soviet Union engaged in a tense, 13-day political and military standoff in October 1962 over the installation of nuclear-armed Soviet missiles on Cuba. The Missiles were only 90miles away from the U.S. shore in Florida. In a television broadcast on October 22, 1962, the president notified Americans about the presence of the missiles, explained his decision to enact the blockade and made it clear that the U.S. was prepared to use military force if necessary to neutralize this perceived threat to national security

The war that began in November 1st, 1955 ended with North Vietnamese victory on April 30th 1972. The Vietnam War was the longest war in American history. Promises to the people and government of South Vietnam to keep communist forces from overtaking them reached back into the Truman Administration. Eisenhower placed military advisers and CIA operatives in Vietnam, and John F. Kennedy sent American soldiers to Vietnam. Lyndon Johnson ordered the first real combat by American troops, and Richard Nixon concluded the war. Despite billions of dollars, roughly 60,000 American lives, and many more injuries, the U.S failed to achieve the objectives.

vietnam-casualties.mooseroots.com
Records of service members who died as a result of the Vietnam War. View locations of names on the Vietnam Memorial Wall, military records, and personal information.

Follow shelby allen
Contact shelby allen
Embed code is for website/blog and not email. To embed your newsletter in your email, click HERE to see how or reach out to support@smore.com