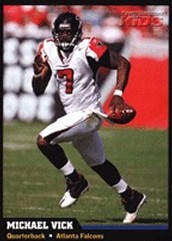 From NFL star to dog fighter and back to NFL star

Michael Vick started out as a rising star in the NFL, to running a dog fighting ring. After he was caught he was banned from the NFL for short period of time and was able to return and is now slowly becoming known for football again.

Why Michael Vick is a Tragic Hero

Michael Vick is a tragic hero because he started out as a star in the NFL. He broke records in college and was making a name for himself in the NFL. In 2007 he was caught running a dog fighting ring on property he owned and thus began his downfall. He spent 23 months in prison and 3 years on probation. He was also banned from the NFL for a short period of time. Now, 7 years after he got caught, he is back to playing in the NFL and beginning to and achieve the level of popularity he had before the dog fighting incident.

6 Qualities of a Tragic Hero

Before getting in trouble

Getting convicted for dog fighting

Returning to the NFL

“I don’t think the NFL has ever seen the likes of me, a quarterback who moves the way I do and throws the way I do. I’m not saying that with arrogance or anything. That is just how I feel." -Michael Vick

“I was ashamed and totally disappointed in myself, to say the least. Dog fighting is a terrible thing. I reject it.” -Michael Vick

“I’ve been through a lot. It’s been great to come back and have an opportunity to play, and be with a great group of guys.” -Michael Vick