Nicole.13474 is using Smore newsletters to spread the word online.

How Was Her Life?

My great-grandmother's name is Leonila Baquiran Padua. She was born on November 7, 1914 in Bay, Laguna, Philippines. Under a year old, her mother died, so Leonila was raised by her cousin's mother. She had two brothers and a sister and she was the youngest of the 4. Leonila had only finished the elementary grades. At that time, girls did not have much chance in pursuing a higher education. Leonila's family wasn't rich so only her eldest brother enjoyed the privilege of being sent to college.

Leonila's charm landed her a runner-up award in a local beauty pageant. That caught the fancy of my great grandfather Felipe who was 10 years older. At age 16, she was married to Felipe who had a degree in Pharmacy from the country's premier university- the University of the Philippines. They had six children: Percival, Exaltacion, Reynaldo (my grandfather), MacArthur, Emerita, and. Annabelle. All of them earned their college degrees, so Leonila and Felipe were very proud. They instilled in their children's minds the value of education despite being poor. They did not own a large house or land or get to travel but Leonila always mentioned her contentment with all her children finishing school and establishing their own careers.

What Was Her Job?

Leonila was primarily a housewife caring for her six children and loving husband. When the children were all grown up and finished school, she found interest in selling used items in the market of Los Banos to help with her family's financial needs. She bought used bottles and empty glass jars, washed them, and sold them to UP College students who used them for lab specimen. She also bought used clothes from well-to-do acquaintances and sold them in the market of Los Banos. She kept this job until her 70's when she grew weaker to carry stuff to the market. 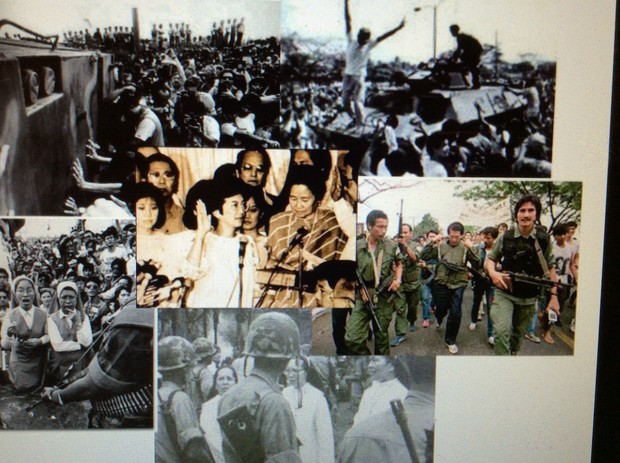 Where Did She Belong in History?

When Leonila was in her 30's, she witnessed the cruelty brought by the Japanese invasion of the Philippines during World War II. People were being shot for no apparent reason and certain villages were burned to the ground. With her small children, she had to run and hide in remote mountains in order to avoid harm to her family. There were very little food to share with all her children and at times they got sick with no immediate medical help in sight. Things changed when the Americans led by Douglas McArthur set foot in Leyte, Philippines and liberated the country from the iron rule of the Japanese.

Another important event in history that Leonila got to witness is the Edsa People Power Revolution in 1986. It was the first ever peaceful revolution that toppled the dictatorial regime of then president Marcos. Millions of Filipinos, including nuns and priests, young and old, gathered for days at Edsa Boulevard in Manila, the nation's capital, despite the threat of military action. They were fed up of the abuses of the government and came together with flowers and rosaries against the mighty military tanks and guns. It ended peacefully with Marcos fleeing to Hawaii. Leonila supported the cause for the fight for democracy.

When Was Her Death?

Leonila's husband, Felipe, died in 1979. To keep herself busy, Leonila continued her job of selling used clothes and jars in the public market until she became too weak to carry her goods. She was taken cared of by my grandfather's sister Emerita in her own home, providing for her needs until she died at age 84. At her twilight years, Leonila always expressed her contentment with her life in general and thankful to God for all her blessings.

I am grateful and proud to learn about Leonila and call her my great-grandmother.

Nicole.13474 is using Smore newsletters to spread the word online.