Home of the Maroons

Home of the Maroons

The mission at Montevideo Middle School is to build within each student a sense of responsibility, confidence, pride in accomplishments, integrity, positive self-esteem, and appreciation for the rights of others and the motivation to BELIEVE, ACHIEVE AND SUCCEED. We believe that teaching each student is a cooperative effort of the student's parents, faculty, staff and community. Learning best takes place in a caring, structured, well-disciplined, and safe environment.

The staff of Montevideo Middle School believes that ALL students can learn and can achieve mastery of basic grade-level skills, regardless of their previous academic performance, family background, socio-economic status, race or gender. We believe that our school's purpose is to educate all students to a high level of academic performance while fostering positive growth in social/emotional behaviors and attitudes. We accept the responsibility to teach all students so they can attain their maximum educational potential. 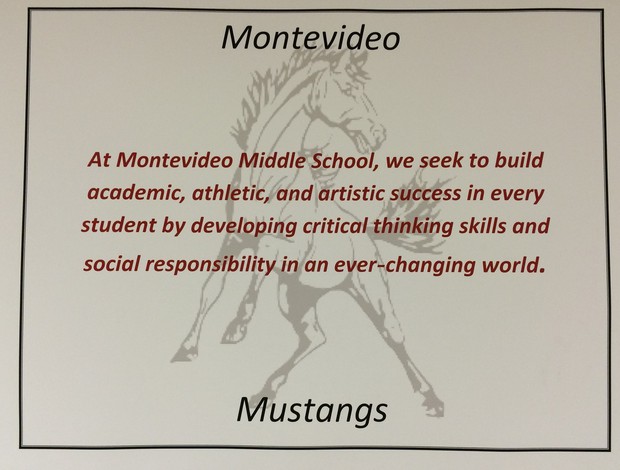 Montevideo Intermediate originally began as a 7th and 8th grade wing for the Montevideo Combined School. The intermediate school operated under high school direction from 1965 to 1973.

MMS School Quality Profile
Back to MMS Home
Embed code is for website/blog and not email. To embed your newsletter in a Mass Notification System, click HERE to see how or reach out to support@smore.com
close
Powered by Smore
Powered by Smore