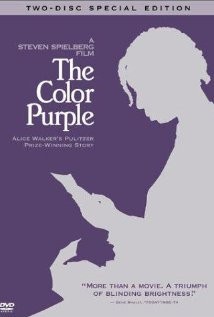 In the book Celie was caught winking at someone during a church service and her father caught her doing it. Her father then proceeded to beat her after seeing her do that. In the movie this never happens to Celie. The movie under sold the relationship between Celie and her father. Although the movie did show some of the cruelty that Celie faced, it did not show it as harshly as the book did.

In the book Celie was never one to speak before spoken to. She always kept quiet and the movie portrayed her differently. In the scene where Shug is leaving, Celie runs up to her and tries to tell her that she wants to leave with her because she feels trapped living with Mister. She then faints after Shug leaves. This portrays how in the book Celie was more of an independent character, while in the movie she is more dependent on the other characters to help her.

In the book before Alphonso dies Celie goes back and visits him after leaving Mister and living with Shug. She goes to his house and sees that he has remarried to a young girl. When she talks to him he does not recognize who she is at first until she tells him that she was once his daughter. The book does a good job in showing just how awful of a man Alphonso was in treating his daughters, while the movie does not show this at all. The movie only shows Alphonso's funeral and Celie receiving his house and land.

In the movie Sofia's jail time was not detailed as diligently as it was in the book. At one point during Sofia's stay in jail Squeak went in to talk to her uncle and had to dress up to make a good impression. While visiting with her uncle Squeak was raped by him and this led to Sofia working for the mayor's wife. In the movie it does not show this at all but instead just releases Sofia from jail and she is shown being a helper to the mayor's wife. This is just another example of how the movie did not show how the selection of detail within the characters played a key role in the book.

A lot of blogs that I read said the movie was better because of how many awards it won, while people who read the book and saw the movie said the book was better because of how detailed it was in showing the relationships between the characters. In my opinion, I think that the book was much better than the movie. The book went so much further into depth than the movie did and for me when I see a book put into film I want to see it follow the storyline exactly how it is written.

Follow Brett Van Patten
Contact Brett Van Patten
Embed code is for website/blog and not email. To embed your newsletter in a Mass Notification System, click HERE to see how or reach out to support@smore.com
close