Along the Savannah River..

lies our beautiful young colony Savannah, starting in 1733 when the ship Anne landed on the Yamacraw Bluff. With the noble duty to increase British imperial trade and navigation along the coastal waterway and to establish a buffer between Spanish Florida and the northern colonies, us early colonists started working on building a solid foundation for a royal colony. Designed by several of the colonists including James Oglethorpe, our settlement consist of 24 distinctive squares surrounded by an outer wall, giving us the title of the first planned city out of the colonies. Outside the wall lives Tomochichi and his people, who you will find to be surprisingly friendly. They've visited the motherland, as well as the colony in South Carolina. After a couple of decades of growth, our small settlement grew to become the dynamic, diverse, and overall great port city it is today; whether you are a Moravian, a Salzburger, a Scottish highlander, a French huguenot, an Irish catholic, Italian, Greek, or Swiss, you will be able to find a home here.

If you're in debt, here's your opportunity!

This is the philosophy of James Oglethorpe, the leader of the settlers in Savannah, even though he holds no official position, other than the honorary title we gave him: The General. Still, he is the leader, notably bending the former rules of not allowing any Jews in Savannah to allow a handful of Jews in, one of whom was a doctor. Samuel Nunes is our doctor here, and he will patch you up no problem no matter how badly you are hurt! Oglethorpe also later successfully landed a treaty with the local Indian population, ensuring our safety, and your safety as well, if you choose to join our wonderful colony. 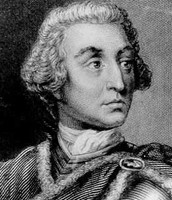 The General, of course. The central planner of the settlement, everything from architecture, commerce, diplomacy, and politics.

Built on St. Simons Island in 1736 right after Oglethorpe's return from England in the year before, Fort Frederica can be seen standing proud, ready to defend the royal colony of Savannah. Oglethorpe went to England again in the following year to ask for funds and men to protect Savannah from this fort. 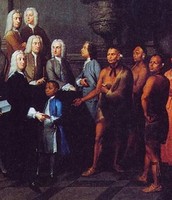 our friend Tomochichi at England

Our friendly relationships with the local Indian chief, Tomochichi, allowed us peace instead of warfare like much of the other colonies up north. Rest in piece, friend,companion, and chief, Tomochichi.

Savannah as a trading port

the sketch on the right shows the unloading of trading boats last spring. Our position as the southernmost, newest colony, that is also conveniently right next to a large river, made us a prosperous trading port. Our greatest exports are rice and trade with the Indians, although we did hear that cotton production will be a promising field to invest in in a few decades..

No Slaves, No Liquor, No Lawyers, No Roman Catholics!

Facebook @savannah_committee
Our unique rules on the ban on rum, importation of negro slaves, Roman Catholics, and lawyers helped us stay focus on building our settlement ever since Oglethorpe and the Trustees, our form of government, have decided upon setting those rules. All of these early rules have been upheld until now, except for the allowing of slave trade in 1738, led by the petitioning malcontents. Our government theoretically allow all religions, except Roman Catholicism. If you are a Roman Catholic, it is our great displeasure to tell you that Savannah is not the best colony for you. Perhaps you should look more south to the Spanish Florida, the one we aren't quite in good terms with.
Savannah, GA, United States oglethorp@royalsavannah.org royalsavannah.org

The split of two counties

In the April of 1741, the committee decided upon dividing Savannah into two counties: Savannah, consisting of settlements on the Ogeechee River north of the Savannah River, and Frederica, consisting of all the land south of the county Savannah. William Stephens was named president of both counties, due to the absence of Oglethorpe, as he was busy with the war with the Spanish. This has stayed as since.