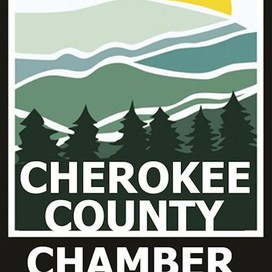 Sherry is using Smore newsletters to spread the word online.

Get email updates from Sherry: 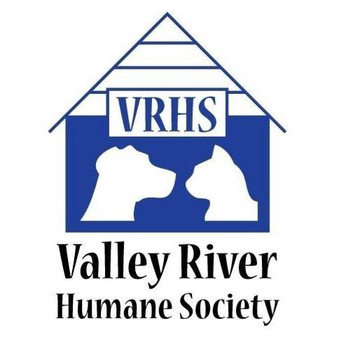 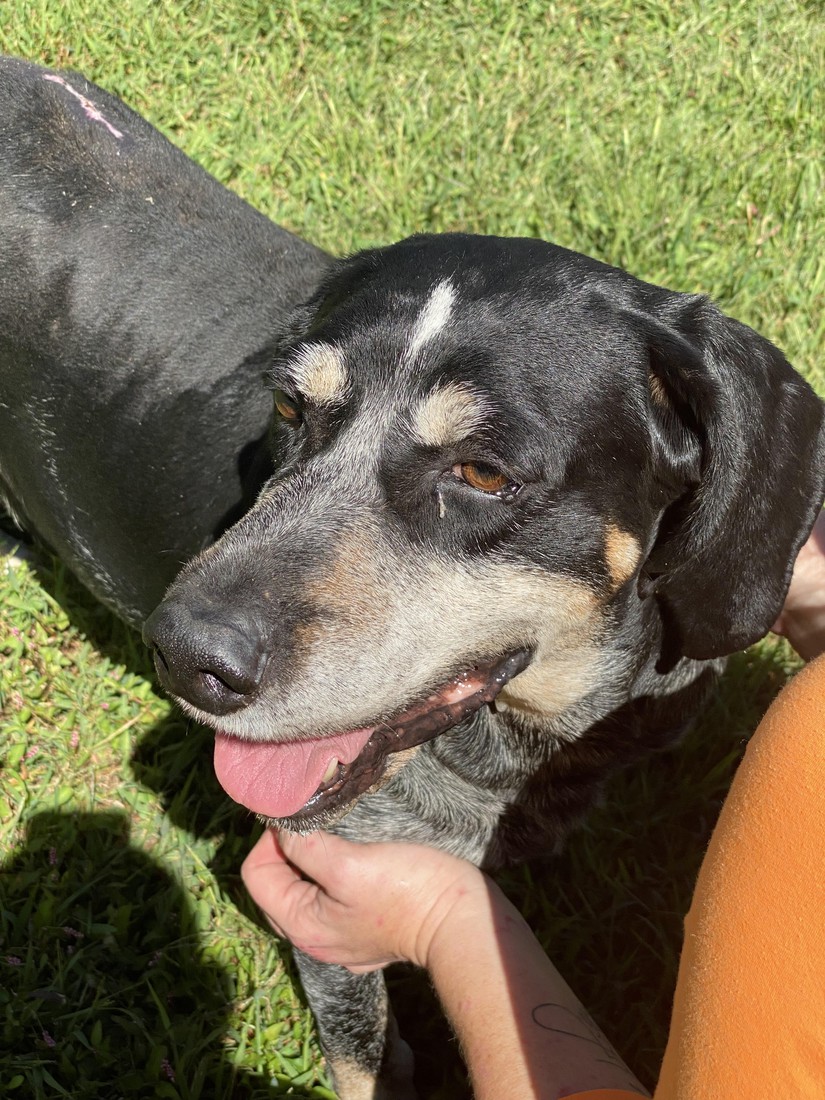 Just as we were closing one Sunday late afternoon, our staff at Valley River Humane Society, in Marble, NC received an urgent request from our local sheriff’s department about a dog in desperate need of care.

They had received a call from neighbors in the nearby town of Andrews, concerned about hearing a painful whining coming from what sounded like a drainage culvert in or near their community.

With the help of the local fire department, the drainage pipe was cut open and stuck inside, was badly injured 75lb NC Blue Tick Coonhound.

It’s hard to tell how long the poor boy was stuck in that drain because when he was finally freed, we realized that not only was he not able to walk, (we worried he had broken limbs or dislocated hips) he was covered in maggots from the middle of his broad back all the way down to his tailbone.

When Deputy Sheriff Howard brought him to us at the shelter, we quickly washed all the maggots off, gave him as much triage as was possible, as his skin was literally eaten raw.

Next morning, we brought him to Andrews Veterinary Hopsital to determine the extent of his injuries. Countless number of lab tests later, the results were not good. His chemistry levels were so severely out of range that vet staff worried he could not be stabilized. We asked to monitor him for a day or two. After which, he was stable enough to be sedated and have his back surgically scalped off.

Four weeks later, and a $3000+ vet and shelter care bill, “Howie”, in honor of Deputy Sheriff Howard who freed him from the drainage culvert, is recovering nicely. He now has a very thin layer of skin and itty bitty bits of fur are beginning to sprout.

He’s such a trooper. He’s an amazing, sweet boy. And considering his size, we think he may have either gotten lost during a bad storm, or was left out in the rain to fend for himself. But at 75lbs, and with his sweet, docile demeanor, this is no outside dog. He belonged to a family. He was somebody’s boy.

Sadly, no one has come to inquire about him. Efforts on our part to find to whom he might have belonged have turned up nothing Howie is still at the Shelter. And will likely stay with us until he is fully recovered and ready to find a new home.

Please help us defray his cost. He is so deserving of a good life and we are desperate to try to help him, but our resources are so tight. Your help will go a long way.

Thanks in advance for your contribution to helping Howie.

Save a Life Today! Donate 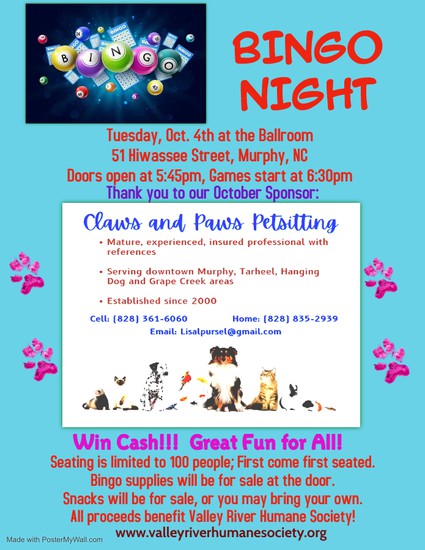 Six games will be played each Bingo Night with a 15 minute intermission after game 3. Card sales are: 3 cards for $10, 6 cards for $15, and 12 cards for $20. Bingo daubers are available for sale at the event. All winners will recieve Cash prizes. Snacks will be for sale or bring your own. A 50/50 will also be happening during the event. Thank you to Claws and Paws Pet Sitting for sponsoring this event.

All proceeds from this event will benefit Valley River Humane Society Shelter. 501 (c) (3)

The Benefits of Hiring a Professional

Once you experience professional pet care in your home, you'll never worry about being away from your pet again.
Here are some reasons why....

Benefits to your pets include:

Staying at home in his/her safe, secure environment
Being surrounded by familiar sights, smells and sounds
Following his/her regular diet and exercise routine
Having play time
Receiving love and personal attention
Maintaining medical treatment, when required
Having someone responsible in case of an emergency
Eliminating the trauma of travel or an unfamiliar environment
Helping to ensure good health (no exposure to other animals' illness or parasites)
For the Pet Parent:

Benefits to you include:

Knowing that your pet is in caring, loving hands
Eliminating the trauma of having to transport and leave your pet
Not having to impose on family, friends or neighbors
Feeling your home is more secure (with someone going in and out several times a day) IE rotating lights
mail collection
Plant watering 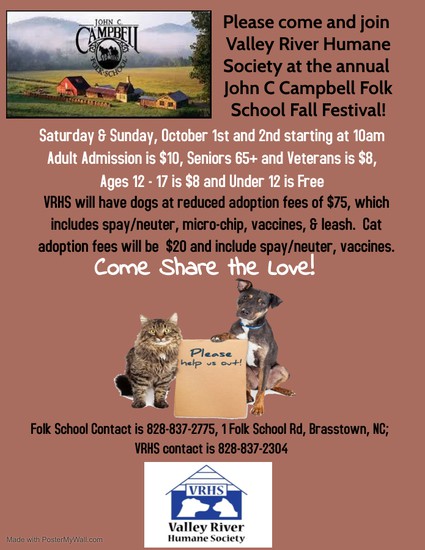 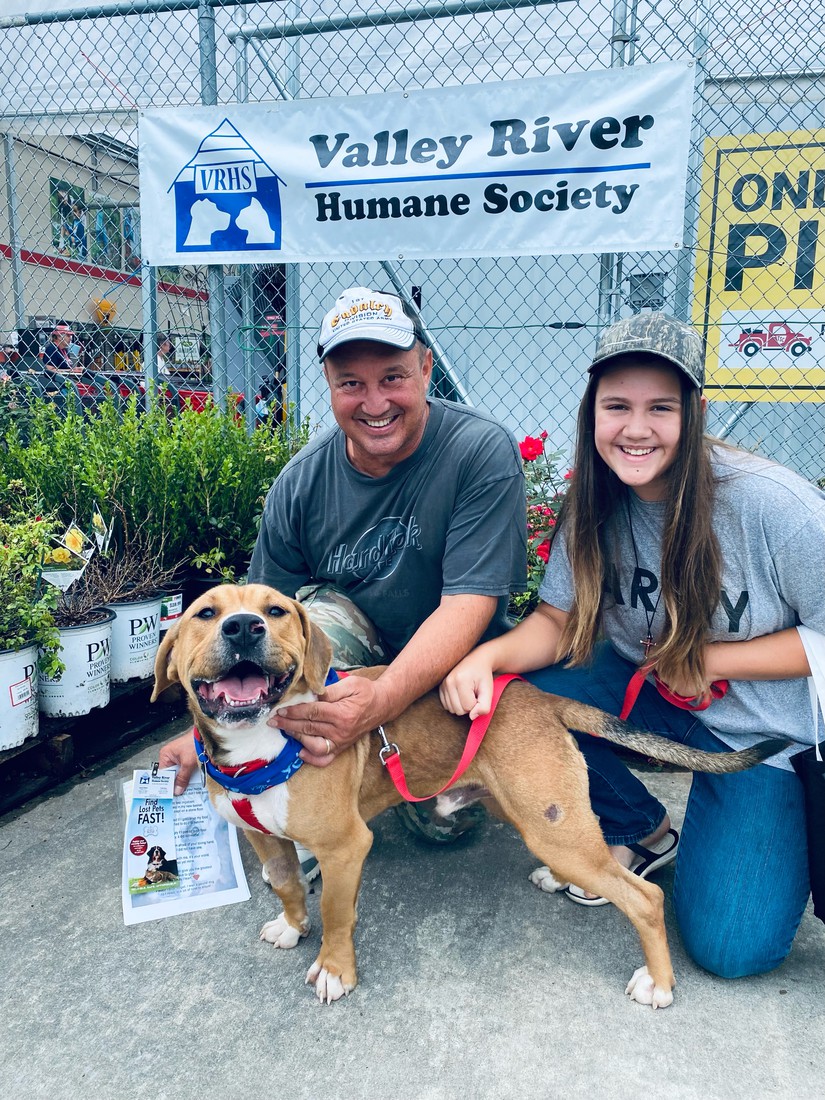 When there’s even a hint of a chill in the air, most folks start pulling out the cardigans and woolly socks, and picking the perfect pumpkin for their front door entrance. You know what else can be the perfect fall addition to warm a home? A shelter pet. Yes, that’s right. The weather makes it an especially good time to get outdoors for long walks with your new pet.

Adopting a shelter pet helps to reintroduce domesticated animals into loving environments where they can thrive. And, shelters can free up badly needed space and resources for other animals in need. But if shopping is your thing, make a donation to the Valley River Humane Society. We can always use more dog and cat food, treats, blankets, towels, beds and toys. Financial donations are tax deductible.

Please visit us at vrhs.org to make your donation today. And consider adopting a shelter pet this month. It’s the perfect time of year to cuddle up to a new furry friend.

Make Adoption Your Only Option - Save a Life Today 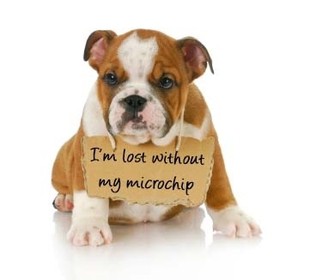 You and your pet belong together!

Your dog or cat’s microchip implant gives your pet the best chance of returning home to you if lost. How do microchips work? Each chip contains a unique ID number that can be read by a microchip scanner and matched with owner information in a comprehensive database. A microchip is effective in reuniting a lost pet with his owner only when the owner’s contact information in the microchip database is accurate. Therefore, it is crucial that you always update your contact information promptly when you move or get a new phone number.

After you adopt a new pet from the VRHS, please register your dog (or cat if chipped) immediately by calling Smart Tag at 1-866-603-6863 or go online at https://www.idtag.com. Pet owners have lifetime memberships included with the adoption of their pets from VRHS. The Smart Tag microchip is a permanent pet ID with a one-time lifetime registration, that also comes with a visible metal Smart Tag pet ID. Different style tags than the ones provided can be ordered online as well.

Any found pet without a tag can be scanned for a microchip. All local veterinarians and the Valley River Humane Society will scan a found pet to help locate its owner. Please help us keep you and your pet together. 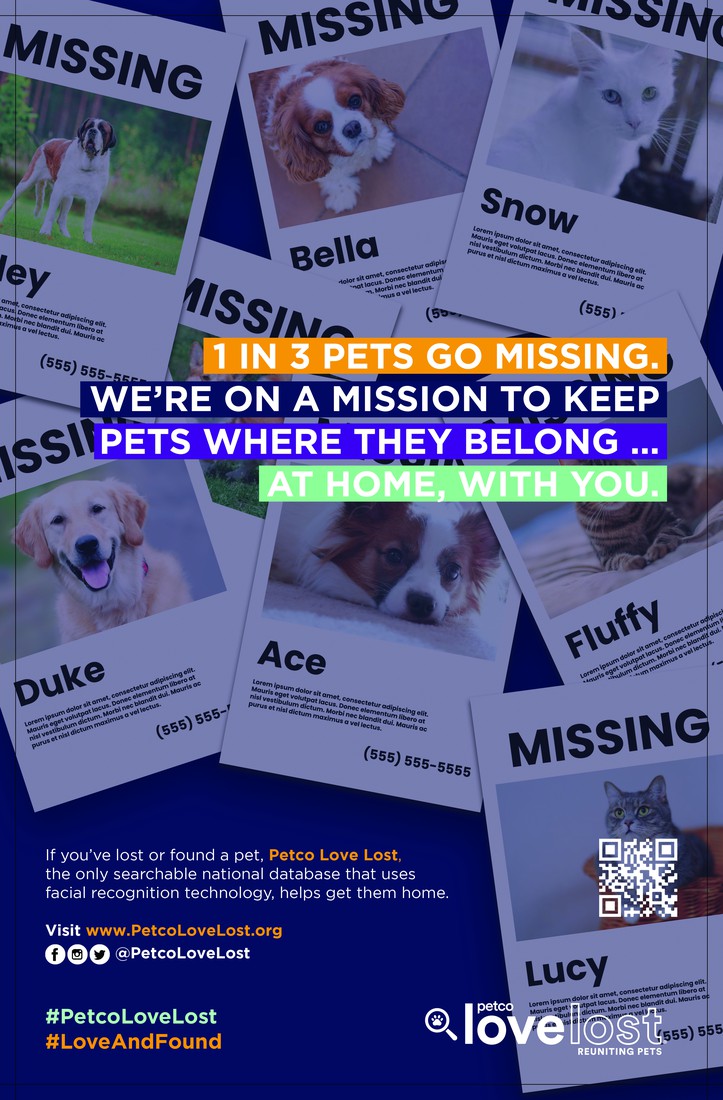 Did you know 1 in 3 pets will go missing in their lifetime? We’re partnering with Petco Love Lost to help pets reunite with their families. Petco Love Lost is a free, easy-to-use national resource, using patented pet facial recognition technology to make it easier than ever to find possible matches for lost and found pets. Join us, let’s unite to reunite at petcolovelost.org.

We are thrilled to partner with Petco Love Lost, a central searchable resource helping lost pets reunite with their families. 1 in 3 pets will go missing in their lifetime and almost 10 million pets go missing every year, but, together, we can change the outlook for lost pets.

Petco Love Lost is a free, easy-to-use national resource, using patented pet facial recognition technology to make it easier than ever to find possible matches from community members and shelters like the Valley River Humane Society.

Help lost pets reunite with their families at petcolovelost.org. 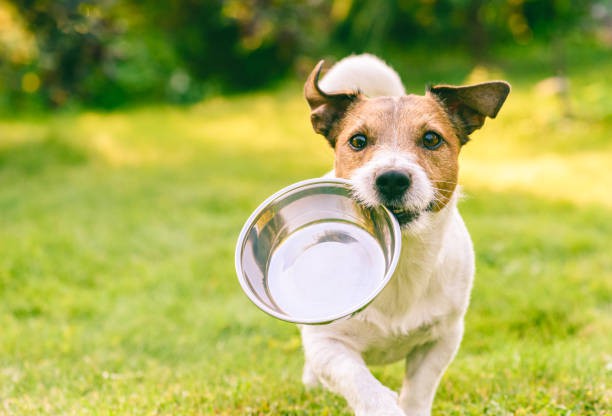 With capacity being reached again at VRHS shelter FOOD is a big priority. Please donate! It can be dropped off or ordered through Amazon and shipped to the shelter. Here is the List.
Shelter Supply List
Voluteer at the Thrift Store

Did you know you can donate directly to VRHS Shelter without leaving your home. From the comfort of you favorite chair you can send much needed supplies via our Amazon Account!
Find a Pet!

In our community, hundreds of animals each year are abandoned, mistreated, or left to fend for themselves. The VRHS offers several different memberships. The fees are used to help keep the doors to our shelter open. Support for our organization comes mostly from private donations from people like you. Your membership fees will help a great deal!

Consider becoming a member…Your gift can provide neglected and abused animals with shelter, food, medical care, kindness, and a chance to find a forever home!

A generous Murphy family comes to the rescue after seeing the edititoral in the August 18, 2021 Cherokee Scout regarding the Valley River Humane Society. The needs at the shelter are great so this family started " Heidi's Fund" for VRHS at United Community Bank in Murphy. Their deposit was for $1000! Their hope is to see this account grow to help the shelter. They are asking local families to donate $10 or more to help the animals at the shelter. Please visit United Community and make your deposit out to VRHS for Heidi's Fund.

We need for the Thrift Store (Monday through Saturday, 10-5)

We need for the Shelter (Monday through Sunday, never stops as the animals always need care)

Dog Walkers (must be strong)

Kennell Workers (must be strong)

(Volunteers can name their shifts)

Drivers for Special Transports to Cleveland TN (cats - only five at a time). You can use your vehicle.

Back up drivers for Asheville Transports

Drivers for Transports to New York

(this is for Cats Only - much easier than transporting dogs)

We have lost some of our volunteers as they have or are going back to Florida. So the need is GREAT!

Volunteers needed! This is an easy and rewarding volunteer opportunity. Come by and talk to us.

Over 40% of all expenses for the Shelter are subsidized by the VRHS Thrift Shop! So, every time you donate to or buy something from the Thrift Shop it REALLY helps.

Anytime you clean out your closet, your basement, your attic, or any other area, please bring those things to us you no longer need or want. We can then turn around and resell those things and those proceeds go to helping the animals. Please visit the Thrift Store often. There are some GREAT bargains and it really helps! 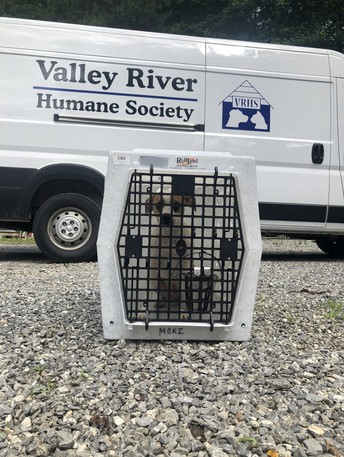 Facebook
A non-profit organization serving Cherokee, Clay and Graham Counties. Our mission is to foster healthy relationships between humans and all living creatures, to prevent animal cruelty and suffering, to find quality home for abandoned pets, and to educate people of all ages about animal needs and the value of responsible pet ownership.
Valley River Humane Society, U.S. 19, Marble, NC, USA 828-837-2304 ValleyRiverHumaneSociety.org

Many people do not realize how vital volunteers are to both VRHS Shelter and the Thrift Store. Please consider being a VOLUNTEER!

For Donations and Adoptions 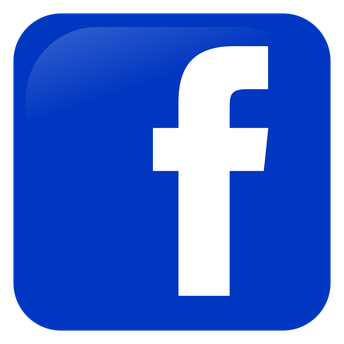 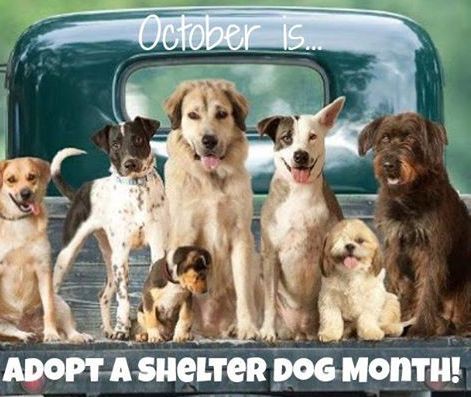 Sherry is using Smore newsletters to spread the word online.

Follow Sherry Raines
Contact Sherry Raines
Embed code is for website/blog and not email. To embed your newsletter in a Mass Notification System, click HERE to see how or reach out to support@smore.com
close