David Tennant may be famous, but fan girls think of him as a close friend. The Scottish actor is very fan-friendly, as he has gone to many Comic-Cons and other events with fans donned in costumes and other apparel showing appreciation for their favorite shows. He is a very popular actor in the UK. He’s starred in plays, TV shows, and movies, and he has for a long time.

Tennant was born on April 18, 1971, in Scotland. He grew up as David MacDonald, watching Doctor Who. The show inspired him and caused him to want to become an actor. He starred in many of his school’s musicals and productions, beginning his life as an actor at the age of sixteen.

The Prettiest Man on Earth

David and his wife, Georgia 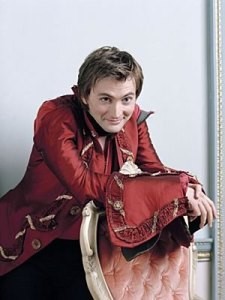 In 1987, David got his first professional acting job. He was sixteen at the time. The role was in an anti-smoking PSA (public service announcement), as ‘Jim’. He has acted in various plays with the Royal Shakespeare Company. He began working in Doctor Who in the year of 2005. His wish for have to role of the Doctor since age 3 had been fulfilled. In the program announcing his arrival on the show, he says he ‘couldn’t stop laughing, the thought was so ridiculous’. Through the show he’s met many amazing people, specifically actors. He even met his future wife, actress Georgia Moffett, through the show. Thus arose a mind-confusing realization- a past actor of the Doctor, Peter Davison, the fifth Doctor, was father to Georgia Moffet. In the episode Georgia and David met, Georgia portrayed The Doctor’s Doctor- whom the episode was named after. Therefore, The Doctor’s Daughter married the Doctor’s daughter. But this realization is all in good fun. In this episode, another one of David’s friends was present- Catherine Tate. Catherine‘s role in the episode was Donna Noble- the Doctor’s sassy, reprimanding companion. Before Doctor Who, the two friends have been in another production together- Much Ado about Nothing, a Shakespearean play. Their roles were Catherine Tate as Beatrice, and David Tennant as Benedick, two reluctant lovers.

David Tennant has gone to many places, in his acting career. He began in West Lothian, Scotland, his home town. He then went to Paisley Grammar School, which was in Renfrewshire, Scotland.

Shakespearean: of, relating to, or having the characteristics of Shakespeare or his writings