Family Bible time for the week of August 9-August 15

Family Bible time for the week of August 9-August 15 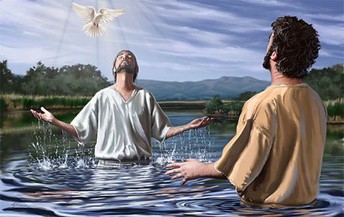 Adam and Eve gave in to Satan's temptation and ate from the tree that God had told them not to eat from. Their sin brought sin into God's perfect world. It also brought pain, sadness, death, and separation from God. But God had a plan to bring us back to Him, and to give us forgiveness and new life. His plan was to send Jesus to be our Savior.

Thousands of years later, Jesus was born into our world as a baby, and grew to be a man. John the Baptist, Jesus’ cousin, started telling people that the Savior God had promised was finally here! John told the people to repent of their sins and be baptized. People thought John might be the Messiah, the one God had promised, but John pointed to Jesus as the One who would save all people from their sins. It was part of God’s plan for Jesus to be baptized by John. It was also God’s plan for Jesus to be tempted and to do what we sinful people cannot do—live a sinless, perfect life.

Heavenly Father, through Baptism, You have made us Your own. Help us live as Your children and resist the devil’s temptations. Amen.

God’s beloved Son was baptized and tempted for us.

Jesus Is Baptized and Tempted

John didn't think Jesus should be baptized because Jesus didn't have any sins to be washed away.

Jesus was baptized because that was part of God's plan. Jesus showed us how He wants us to live. Our Baptism connects us to Jesus, and our sins are forgiven because of Him.

When Jesus was baptized, the Holy Spirit came down on Him in the form of a dove, and God the Father spoke, saying, "You are my beloved Son. I am pleased with You."

Jesus did not give in to the devil's temptations. Jesus never sinned. Jesus helps us resist temptation, but sometimes we still give in and sin. Jesus kept God's Law perfectly for us, and died to pay for our sins.

Dear heavenly Father, thank You for making us Your children through the waters of Holy Baptism. Thank You for helping us when the devil tempts us. Thank You for Your forgiveness when we fail. In Jesus’ holy name we pray. Amen.