The Interstate Commerce Act took place in 1887 and was a United States federal law that regulated the railroad industry. It was created so monopolies did not take control of the railroads and charge insane rates to use the tracks. I am proud of this Act, because it was a way for the country to keep everything fair and just. Also, it stopped outrage that would have came if the monopolies had a chance to put rates on the railways. To show this Act, I have Political Cartoon that explicitly shows what would happen without the Interstate Commerce Act. 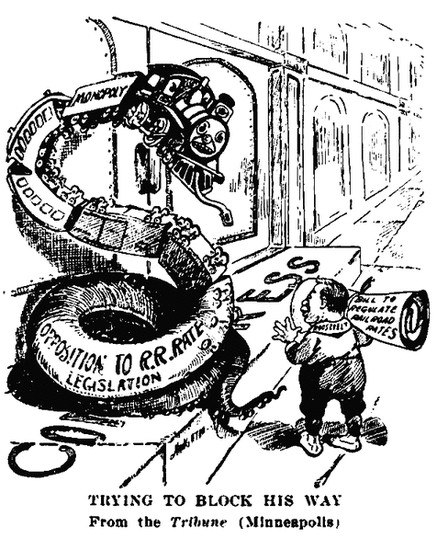 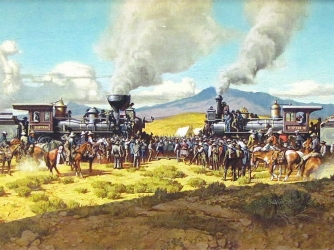 Assimilation is the process where a group or culture comes to resemble a different group. This is what was happening to the Native Americans while the US was becoming more industrialized, and the US tried to "Americanize" the Indians. The US tried to force the Natives to transfer by eradicating all of the buffalo, and they also took the Native American children and put them into a boring school that would strip away their heritage and "Americanize" them. I am very ashamed of America for doing this, because the Natives were here far before us and they deserved to stay with their culture that has been around for a very long time. Also, what gives America the right to just try to strip away an entire culture/heritage. My evidence is an article from PBS that talks about the problem of assimilation from the side of the Natives. 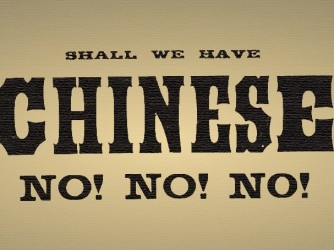 When immigrants came to the US because of the tough times in their country, such as famine and plague, they took low paying jobs because they would do anything to make any amount of money. Also, they would live in tenements, which were small and dumpy houses that people would share, because they did not make enough to live a regular American life. I am both proud and ashamed of this, because while the US was letting in immigrants from other countries, they did not treat/pay them as they should have. This picture shows the tenements and harsh living conditions that the immigrants had to live in. 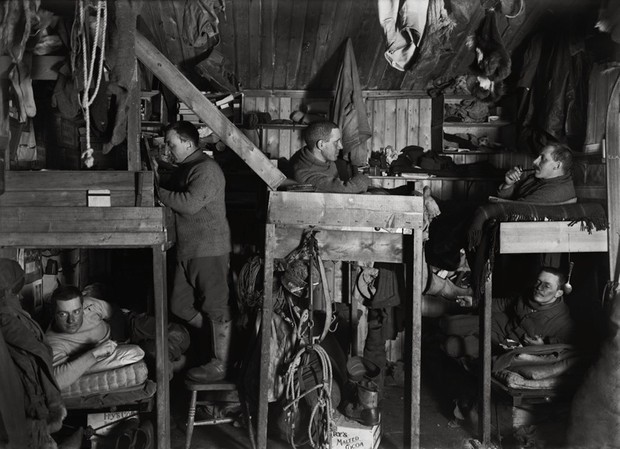 A push factor is something that is bad that pushes somebody away from their home country, and a pull factor is something that is good or interests a person to leave their home country and come to America. Many people immigrated to America because there were many pull factors, such as opportunity, that made it an easy choice to leave their old country. These factors make me proud to be an American because it shows that many people look at the US and they see positive things, and not bad things. Also, it shows that we are accepting enough to invite in immigrants and give them opportunity. This picture clearly shows what these factors are and gives examples.

Political Machines are political organizations where a boss commands the support of a corps of supporters and businesses. Most of the time, the people are offered rewards for their efforts with the Machines and they get pulled into the organization. One of the biggest bosses was Boss Tweed, and he took control of many organizations. To me, Political Machines are both good and bad because they get control using authoritative/commanding ways and help the poor people, but they also help the country by making money and keeping their politics organized. This article goes much more in depth on Boss Tweed and his affects with Political Machines.

The Infrastructure of the buildings were the key of a good city as everything started to urbanize. The infrastructure included plumbing, construction, and everything else that had to do with the inner-workings of the city. Infrastructure is definitely something that I am proud of because it made cities much stronger and it improved the strength of the cities and offered many ways to save money, such as things like new ways of plumbing or irrigation. This picture shows everything that contributes to infrastructure in a city. 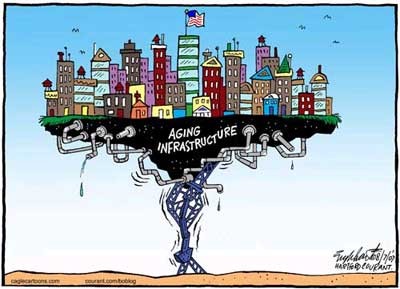 In my opinion, Urbanization brought many people together due to the tightness of a city compared to the rural areas and farms with vast amount of land between a person and their neighbor. In a city, the houses and buildings are built up instead of out, so you are actually on top of your neighbor. Of course people being pulled together in a community is something to be proud of because it shows how the US is still a community and not all product based. Here is a quote that captures my side of this argument on urbanization.

Muckraker is the name given to journalists and writers who exposed the political corruption at the beginning of the 20th century. Many of these muckrakers focused on problems with the lower class and services that are not as good as they should be. For example, Jacob Riis was a muckraker who helped the country realize how the immigrants were living in tenements and that they deserved better. Many Laws/Acts were passed due to these muckrakers such as the Child Labor Act, Pure Food and Drug Act, and Meat Inspection Act. I am both proud and ashamed of America because it was good that these muckrakers were trying to get to the bottom of these issues in the United States, but it is horrible how a lot of these things have been occurring for years before that and nobody found out. This is a short clip that goes more in depth on the topic of Muckrakers.
The Muckrakers study.com
During the Progressive Era, from around 1900-1917, government intervened in the economy, breaking up trusts, and regulating railroads and other...

During the Progressive Era, there was a huge movement about women suffrage and women rights. Women fought for years to earn that right to vote, and they were treated like they did not deserve anything, and it took them far too long to get their rights. I am honestly ashamed that it took the male leaders of the US that long to realize that the women deserve the right to vote and help choose how they want their society. There were even times when the male citizens would attack the female protestors, and that is just totally wrong. This picture is of a protesting parade for women suffrage and it can give you a bit of an idea of how many people were involved with this topic. 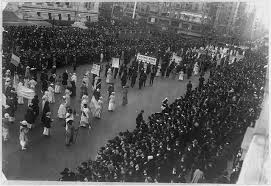 The Monroe Doctrine was a foreign policy that stated that further efforts by European nations to colonize land or interfere with North or South America would be viewed as acts of aggression, which would cause US intervention. This meant that if any power tried to mess with the American politics in any sort of hostile act, then the US would fight back. This makes me feel on the fence, because why does this Doctrine have to be made, and why does the US need to tell everybody that if they mess with them, then they will be fought? This video will help explain all of the unclear reasoning of the Monroe Doctrine.
The Monroe Doctrine -- A Brief Explanation

The Panama Canal is a man made pathway that cuts through Panama and connects the Atlantic Ocean to the Pacific Ocean and drastically shortens the path because there is no need to go all the way around South America with this shortcut. It took the US a while to be able to build the Panama Canal because they had to get the area from Panama, but once they did get the land and get it build, they will save a lot of money and time, as well as making a huge advancement. This makes me feel successful because it is cool to know that I am from the same country that made a 48 mile long ship canal. This picture is the path through the Panama Canal compared to the path if there was no Panama Canal. 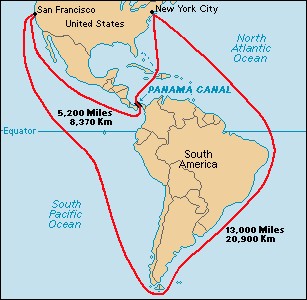 The Open Door Policy is a policy that kept China open to trade with all countries equally and kept one country from taking control of China exclusively. It was put into effect because the US wanted to trade with the Chinese, so they made this policy to keep the trade fair. This makes me proud because it shows that the US was trying to keep everything organized and not cause an outbreak because something isn't fair. This picture is a political cartoon about the Open Door Policy. 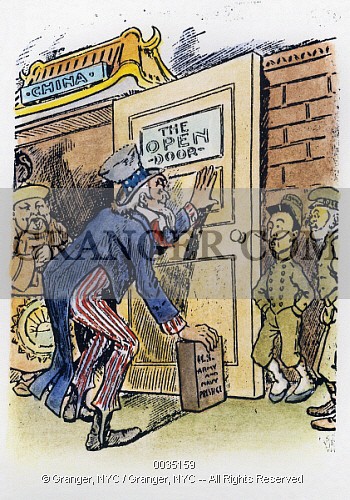 Since the war was lasting longer than anybody had expected, there was a big need of weapons, so many factories had to hire more workers, and the factories were making more money because they were selling a ton of weapons. Also, many people who did knothole a job were getting hired because employment was needed to produce as many weapons as possible. This makes me happy, because many immigrants and people who lived in dumpy places and were not well-educated were getting jobs and being able to make a living. This picture shows some weapons that were very useful during World War I. 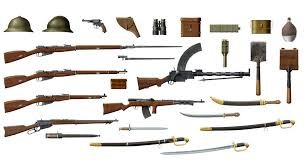 Follow Seth Krzeminski
Contact Seth Krzeminski
Embed code is for website/blog and not email. To embed your newsletter in a Mass Notification System, click HERE to see how or reach out to support@smore.com