Get email updates from monkey:

A lot of people worked in Factories it started at age 5. Addie was one of these people that worked in a factory. You had to work in a factory and u had 12 hours of hard work in the factory. Some of the machines in the factory could severely get u hurt and sometimes even die from a machine if u got caught in it. That's why you had to be really carefully in factories around the machines. 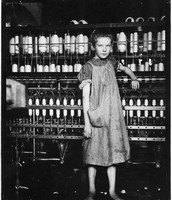 She worked in a factory.

It puts all one piece together in individual pieces to make the whole figure.

A cotton gin is a machine that quickly and easily separates cotton fibers from their seeds, allowing for much greater productivity than manual cotton separation.

The gun is named for its inventor, Richard Jordan Gatling, a physician. Gatling neatly divided his sympathies during the Civil War. While trying to sell machine guns to the Union, he was an active member of the Order of American Knights, a secret group of Confederate sympathizers and saboteurs.