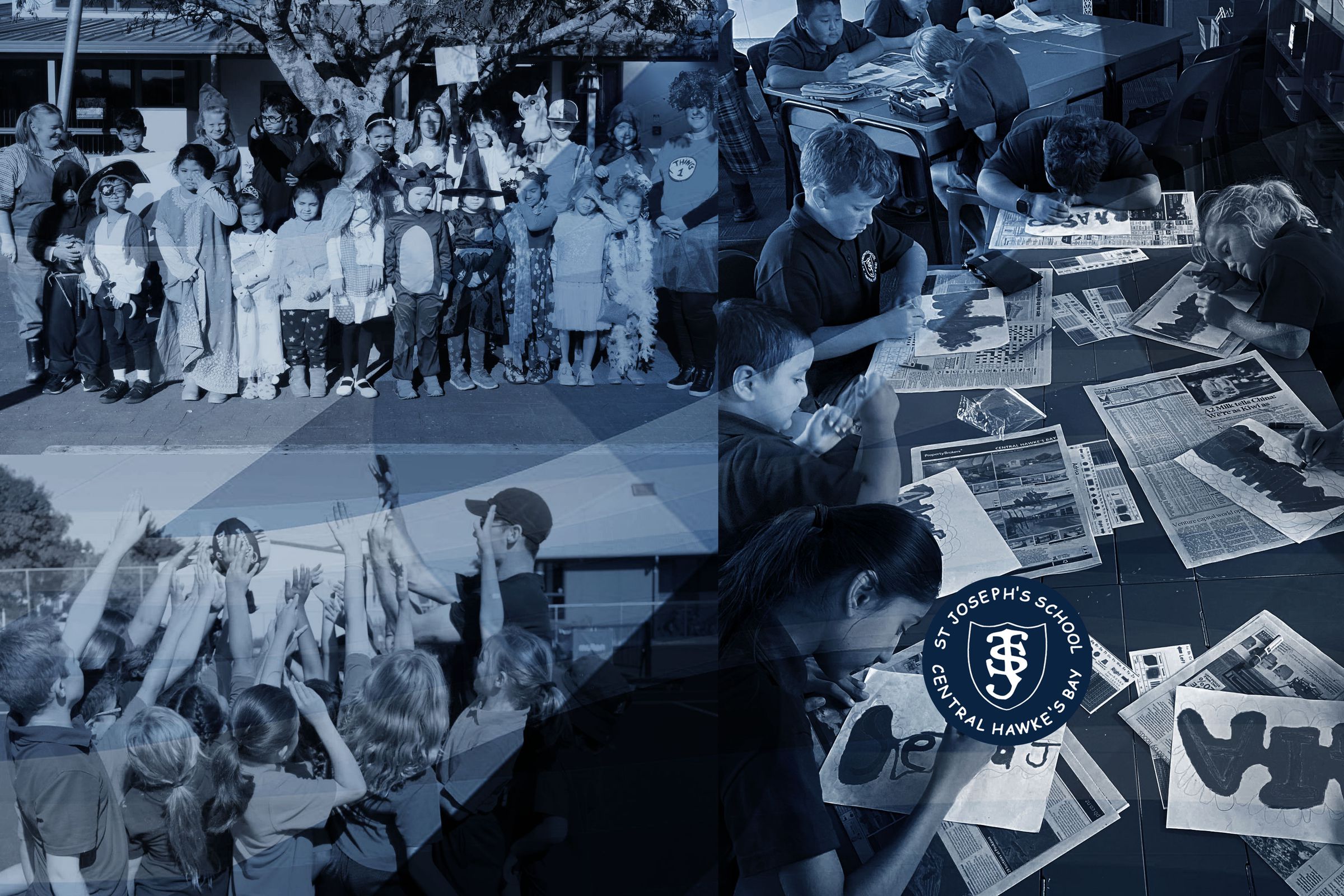 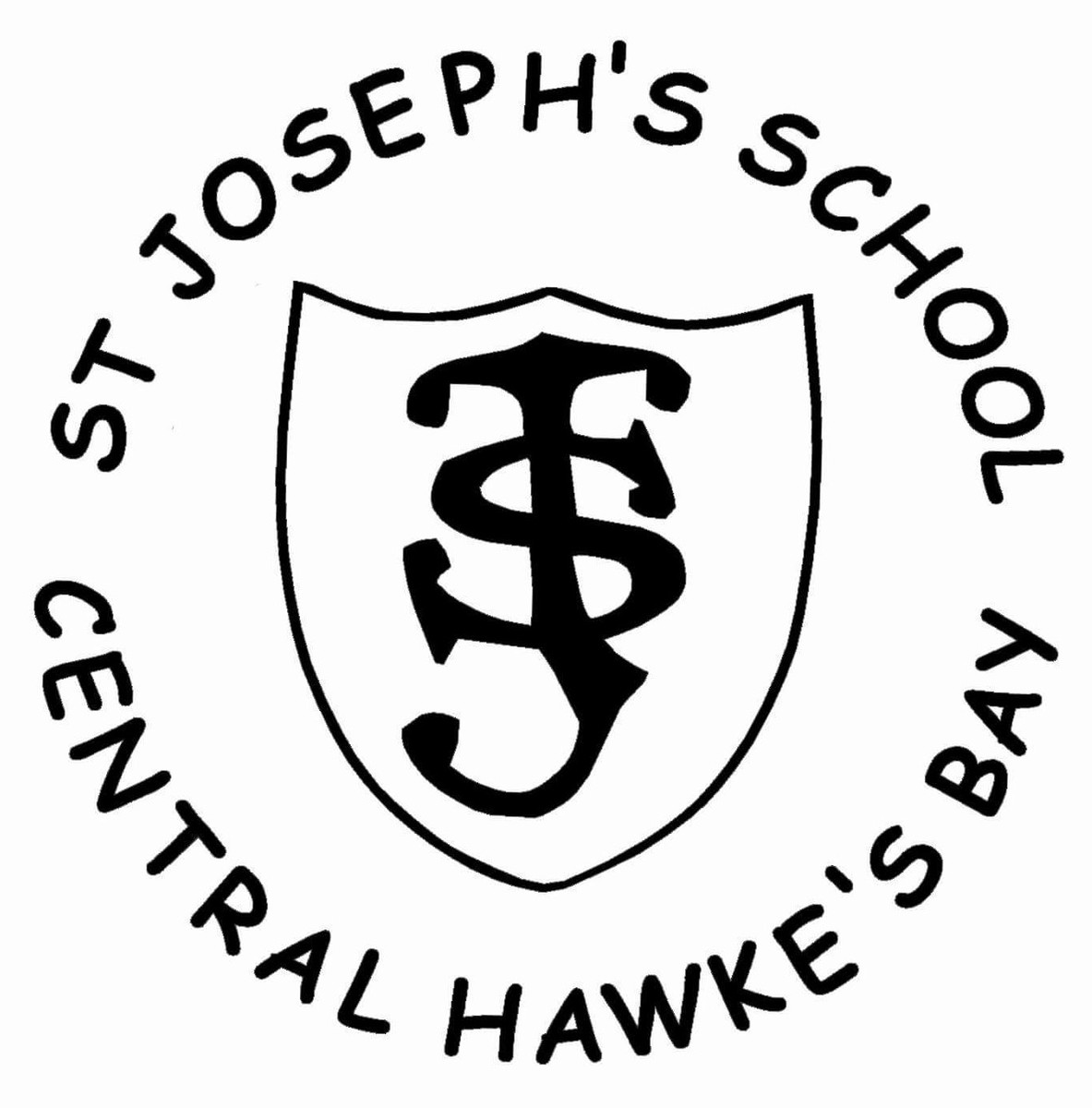 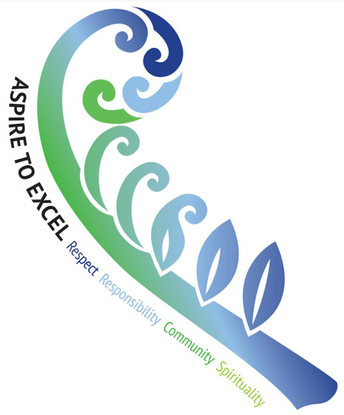 In order for your heart to be full, take time to lift your spirits

Fear not for I am with you: be not dismayed, for I am your God: I will strengthen you, I will help you, I will uphold you with my righteous right hand

The momentum of learning continues to flourish, and we have fully embraced this weeks whakatauki as we filled our hearts and took the time to lift our spirits. Through the kind gesture of a mystery annonymous sponsor - THANK YOU ANNONYMOUS SPONSOR!, we were treated to an afternoon of laughter. We were guaranteed giggles galore from internationally award-winning funny man Fraser Hooper and giggles is what we received. Our students were entertained through this hilarious show featuring a stunt duck a human fish eccentric dancing and the silliest boxing match you have ever seen featuring our own teacher aid, Lottie. Fraser mixed mime, audience participating and slapstick to delight us all. An afternoon we will not forget. 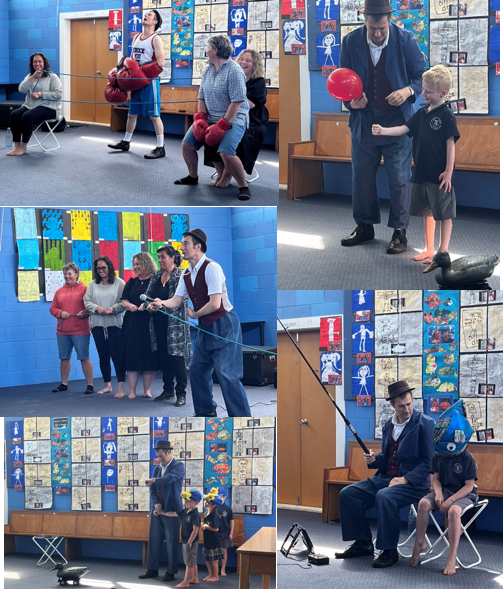 This was followed up by a well organized student planned and prepared Fancy Dress Disco. We all enjoyed 2 hours of more fun, laughter, singing and dancing. Thank you to all our families who celebrated this opportunity with their children. As you can see from the photos, the photo booth was a hit! 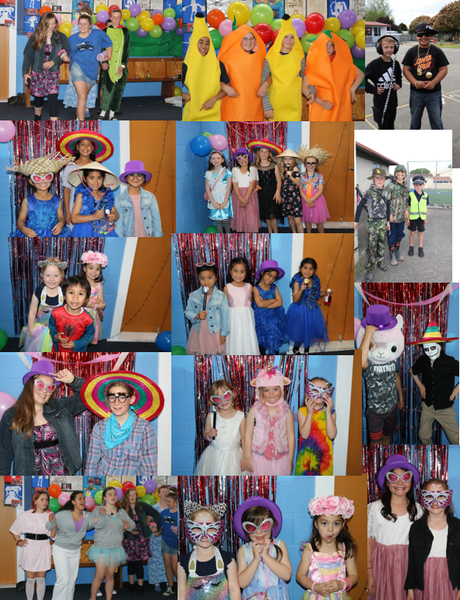 On Thursday we participated in ‘The Great NZ Shake Out’, Our students responded with knowledge, respect and care. With thanks to the Waipawa Catholic Trust we now have Emergency Kits in each classroom. 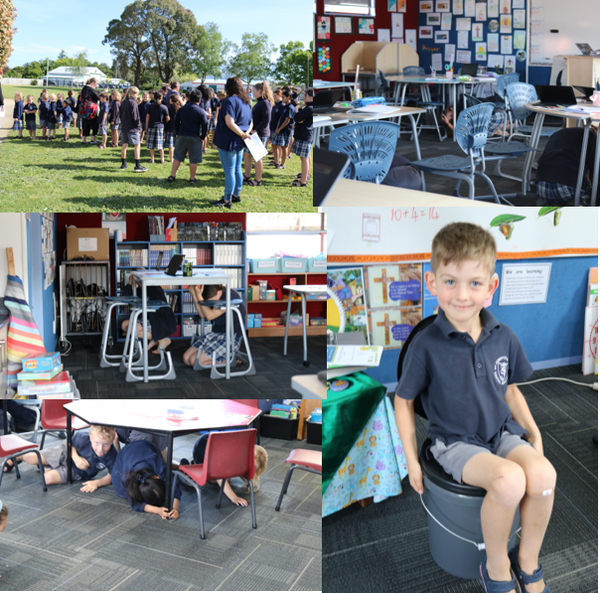 Leading in Faith, Learning for Life

Yesterday we celebrated All Saints' Day to remember all saints and martyrs during Christian history. It is followed by All Souls' Day today, where we commemorate those who have passed within the faith. In class students are reflecting and taking action with what they know.

Did you know that, Te Whiti o Rongomai and Tohu Kākahi (Māori catholic leaders) led the Parihaka movement. Both men were committed to non-violent action in order to resist the invasion of their estates by European armies, and to protect Māori independence. They drew on ancestral as well as Christian teachings to offer both spiritual and political leadership while the colonial interests sought to portray them as fanatics. Both men advocated good relationships and interaction between all races as long as Māori ownership of lands and independence from Pākehā (European) domination was respected.

Congratulations and thank you to our school “Dance Squad” who participated in the Hawkes Bay Dance competition in Havelock North on Monday. What a group of superstars. Coached by Mrs. Chesswas, this group created a dance with the theme of Good & Evil. Their interpretation was creative, well choreographed and a real audience pleaser. The group will perform for the rest of the school before assembly this Friday at 2:30PM.

Running Fun - Thanks to Mr. Brown who came and marked our 100m sprint track over the weekend. The track was being used before the bell rung on Monday morning and is still being well used across each day.

Jumping Fun - Thanks to Dave (Kelly our cleaner/caretake’s partner) for beginning the arduous task of preparing our school long jump pit. This prompted the support of parent Tony Birdsell’s ‘Ground Works’ crew to bring in their digger and complete the job. They also collected and filled our long jump pit with sand donated by Mr. Tim Edwards at Hirock - THANK YOU!. It didn’t take long at all for the long jump pit to be fully operational.

We are super grateful for the support we receive from our local community - THANK YOU! and may god continue to bless you all. We welcome you all to come and see for yourselves how, as a result of others generosity, our students skills and abilities are flourishing. 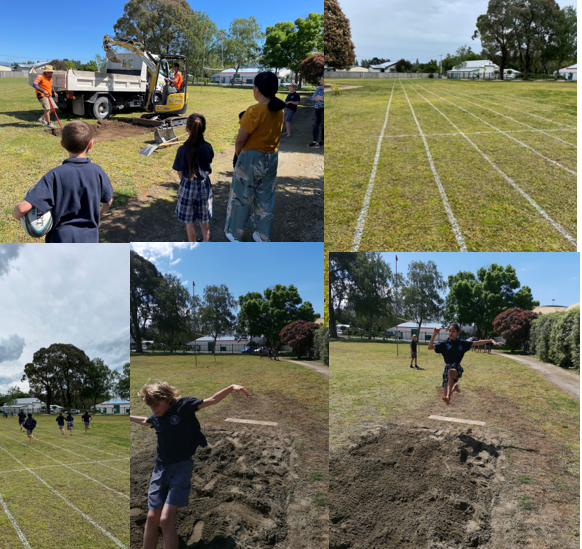 May God’s love continue to strengthen you, help you and uphold you.

MESSAGE FROM OUR SCHOOL LEADERS

Hopefully everyone had a great holiday.

Last week on Friday a group of year 7 & 8's held a fancy dress disco from 4pm-6pm. A big thanks to all the organizers in Room 6 who helped make this disco happen! Also a big thank you to anyone who brought a gold coin donation to the disco!

On Monday some of the year 7 & 8 went up to Havelock North Intermediate to participate in the Havelock North dance festival competition, it was really amazing to see all the dances being presented. A big big thank you to Mrs Chesswas for organizing this amazing day for us and to the parent helper for taking their time out of their day to come and support us.

-Bring a smile to school

Have a great week

All Souls’ Day is a day to commemorate and pray for the souls of baptized Christians who have died and are in purgatory. It is also called “The Commemoration of All the Faithful Departed”, “Feast of All Souls”, or “Day of the Dead”.

All Over The World

· In Hispanic countries, the day is called Dia de los Muertos or Dia de los Difuntos. Food is offered to the souls.

· In Austria and Bolivia, cakes – called soul cakes – are left for the departed.

· In Hungary, it is called Halottak napja.

· In Syria, Israel, and Lebanon, it is called Yom el Maouta.

· In some parts in France, people kneel at the tombs and pour holy water or milk.

· In Malta, roasted pig is a traditional dish on All Souls’ Day.

· In Linz, Austria, a musical composition called equale is played. 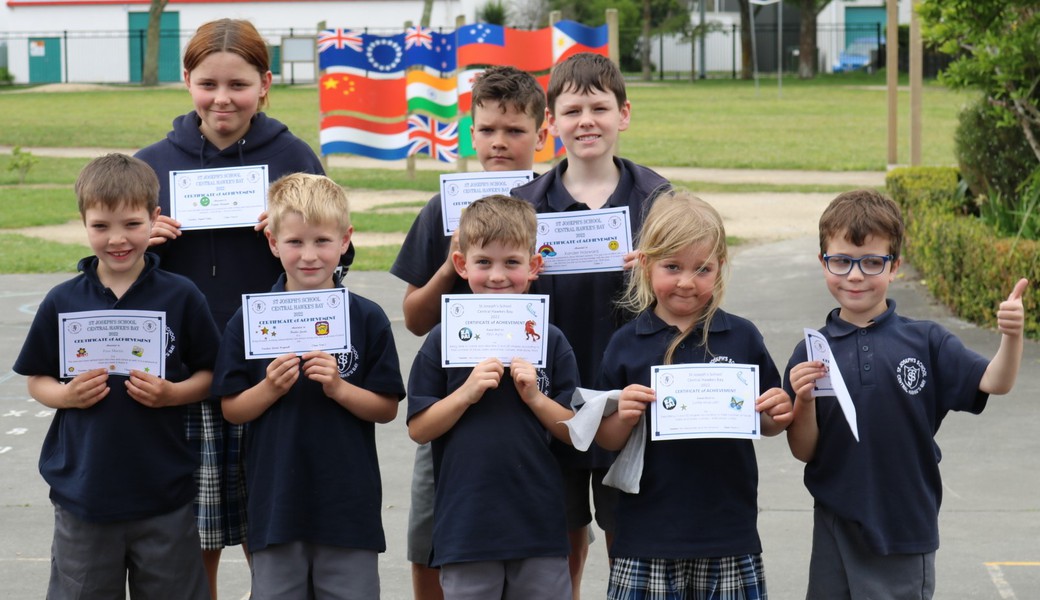 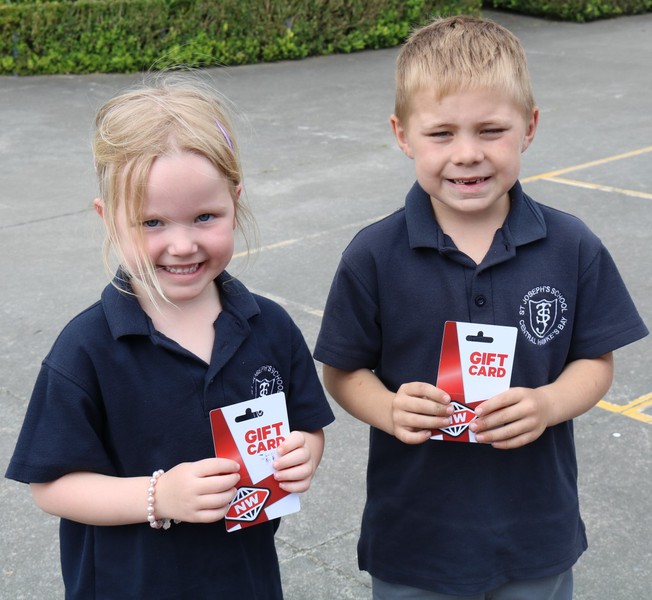 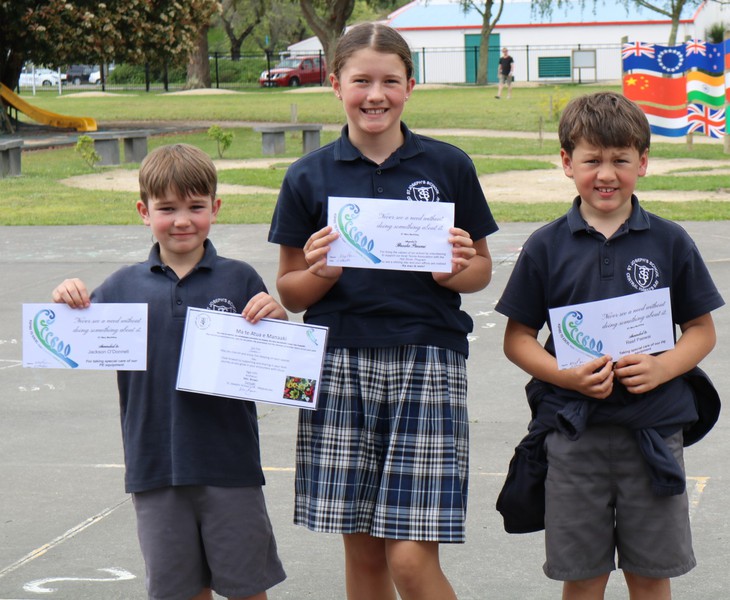 This week we welcomed Liam Martin to Room 1 classroom 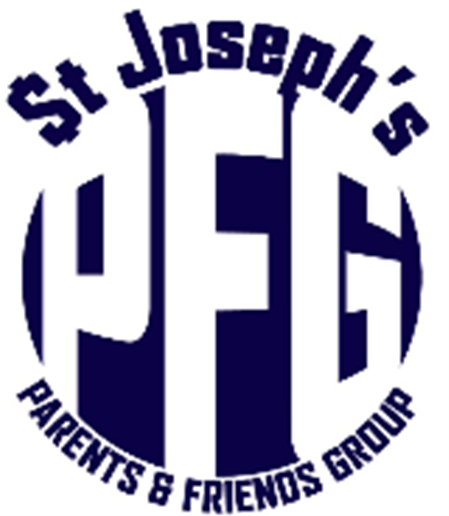 Friday - PIE day Don't forget to get your orders in.

THE DATE IS SET - SATURDAY 19TH OF NOVEMBER. Please see our flyer to find out more. We really need the help of our Shearing community to pull this fundraiser off. Time is ticking by and we are struggling to get helping hands. The Malcolm farm is located 5 mins North of Waipukurau and is a great day for all those involved and those that visit. Please help us out!!!

Our end of year raffle tickets are nearly here! This year we have some awesome prizes: 1st place $1,000 New World Voucher 2nd place $500 MTA 3rd place $200 New World Voucher These will be $5 a ticket. Keep an eye on the school app for when these are available to collect and sell to your family and friends.

A big thank you to New World Waipukurau for their very generous donation to support us.

Our next meeting is on the 7th of November 7.30 pm at the school. We are still asking for new members, so please come along and find out more or make contact before. New members is critical to the survival of the PFG and all the wonderful things we are able to provide our children with. 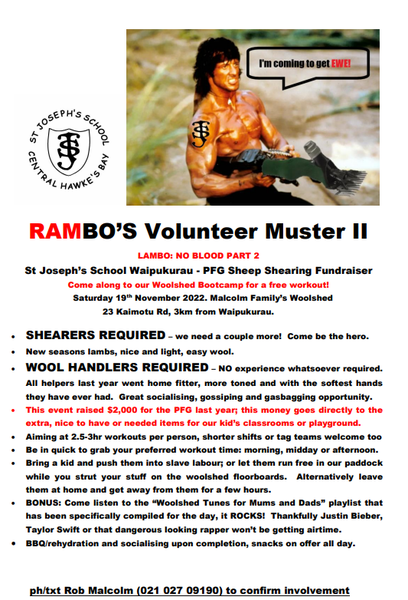 Thinking of joining our school whanau in 2023?
Please contact Sarah Jackson in the school office for an application packet

21st - Teacher Only Day (No school for students) 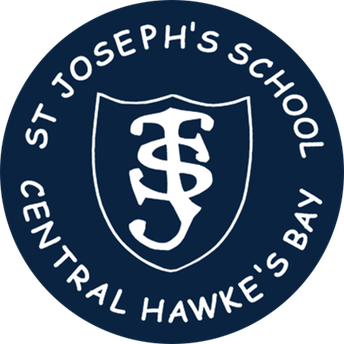