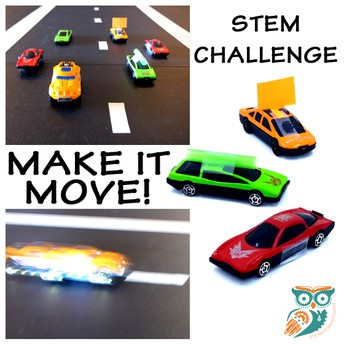 Race your car from one end of the table to the other. This can be a head to head race or simply who can make it to the end.

You may not touch your car or alter the track. You also can not lift the table.

When we started, the first ideas to come up were building a ramp or lifting the table, so it was important that they understood those were against the rules. Building the ramp would alter the track.

Once they understood those rules, the creativity really started. Of course we had to convert our homeschool table into a race track, complete with cheering crowds!

We had one car altered with magnets. By strapping a magnet to the bottom of the car, the kids were able to use another magnet or a magnet wand on the underside of the table to race it to the other end. The challenge here was finding a car with big enough tires and enough lift so the magnet didn’t rub against the table slowing it down. But once we found one, it worked great! This worked so well the kids kept doing it for hours.

They loved this idea so much they tried to was use the magnets backwards. This involved strapping the magnet to the back of the car, then reversing the wand so the magnets repelled each other, pushing the car forward. This worked, but it was insanely hard to keep the car straight. Having the magnet on the bottom made for a much faster race!

Next idea was to attach a sail to the top of a car and blow on it. We recently did our windpower challenge, so it was neat to see those lessons coming back into play again. This again worked really well.

Another idea they had was to create basically a zipline for the car by attaching a straw to the top and running a string through it. When one end of the string was lifted, it zipped along to the finish line.

Finally, they tried to amp up the windpower with a propulsion system using a balloon. When it worked this was SUPER fast, but getting the balloon blown up, attached and having everything angled just right so it raced took a lot of attention and focus. But when it worked… WOW! The biggest issue became keeping it on the track as it usually ended up flying across the room!

There are so many different ways kids could solve this STEM challenge. The only limit is supplies and imagination. How would you race your car down the track without touching it? 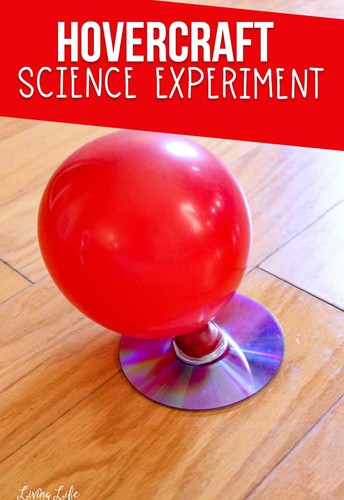 This fun science project works because the force of the air expelling from the balloon creates a cushion of air between the bottom of the cd and the surface it is on, allowing it to glide just barely resting above it.

Trajectory is the path a free-flying object (a projectile) follows through the air. A projectile has two forces working on it. The inertia that launches it into the air and the gravity that brings it back down to earth. So how do you study trajectory? By hurling things into the air!

A catapult is something you can use to launch something a far distance away, using the release of accumulated tension instead of explosives. I wanted to make simple catapults for the kids in our science co-op to use during our trajectory experiment.

By increasing the speed at which they were launched (by stepping on the board harder) some kids were able to lengthen the distance they flew. If we had also increased the angle of the wood, we probably would have seen a bigger difference in the path.

Since we couldn’t change the angle of the catapult, we decided to try it with a lighter object, a marshmallow. The kids followed the same steps as before but had much better results. The decreased weight of the projectile was a much better match for the catapults we had.

Students will learn about Clousat!

Cloudsat is a space mission that will study clouds, taking 3-D images of them using advanced radar technology. Cloudsat will orbit Earth, flying in formation with other satellites that take cloud measurements using different kinds of instruments. Cloudsat will measure how much liquid water and ice are in the clouds at what heights, and how these measurements affect the clouds’ ability to reflect or trap the sun’s energy. Data collected by the satellites will be combined to give a better understanding than we have ever had before of how clouds work and how they affect climate all over Earth. Cloudsat will be launched in 2003. It is a joint project between Colorado State University, NASA’s Jet Propulsion Laboratory, the Canadian Space Agency, the U.S. Air Force, and the U.S. Department of Energy. To learn more about Cloudsat, see http://cloudsat.atmos.colostate.edu/.

You'll learn the fundamentals of computer science with drag & drop blocks. Create your own drawings and games!

Other Science & Technology Information to Pass On