“Learning the 100 most common Latin and Greek stems in the English language gives you access to at least 5,000 words."

Why teach Greek and Latin Roots?

Did you know that 70% of the English language is derived from Greek and Latin language? When students are given Greek and Latin roots as building blocks they will have the tools to decode new words they encounter when reading independently. 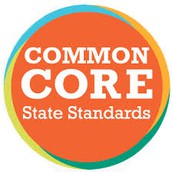 Greek and Latin Affixes and Roots are Important Parts of the Common Core in All Grades.

Use common, grade-appropriate Greek or Latin affixes and roots as clues to the meaning of a word (e.g., audience, auditory, audible). Determine the meaning of the new word formed when a known affix is added to a known word (e.g., agreeable/disagreeable, comfortable/uncomfortable, heat/preheat).

The TextProject provides a resource on Morphological Families. Often, the most common words in a language have multiple meanings, a feature that is called polysemy (“many meanings”). The word "set", has 464 definitions. That is an unusually high number, but quite a few everyday words (e.g., find, change, good) have a surprising number of nuanced, or distinct, meanings. Here are some other Morphological Families. 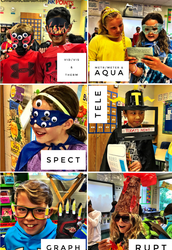 Students should research the meaning of the root, make a list of words using the root, and create a superhero character based on the root. The superhero’s costume and super-power should be directly linked to the meaning of the root. Superhero costumes should allow other students in the class to infer what root inspired the disguise without directly giving it away. For example, a crown of pencils might reveal the root graph, a cape with the map of the world might reveal the root geo, or a mask of moons and stars might reveal the root ast. This is where students really get an opportunity to be creative. Students could also write a short story explaining how the superhero gained his or her superpower using as many of the words containing the root as possible. 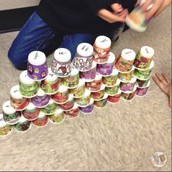 Ms. Reed's favorite ways to reinforce learning Greek/Latin roots or suffixes is through a center she calls Stacks. On the outside of the bottom of cups write the root or suffix. Inside write the meaning. Students should pick a cup and read the bottom and then say the meaning without looking in the cup. They can check if they correct by reading the inside of the cup. If they get it right, they can stack it. 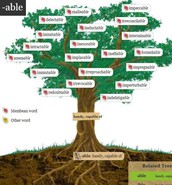 Root of the Day

On this website words are broken down into constituent roots. Each "Daily Root" has an interactive component and podcast to engage students. Use the Google document for whole class discussion or independently at a computer center.

Root Word of the Day Document 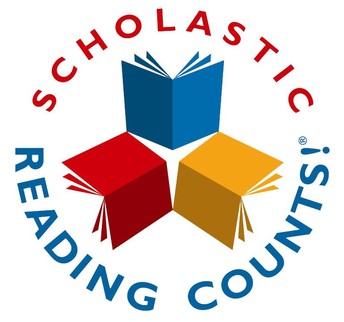 A Great Place to Start

The goal of Vocabulary Packets: Greek & Latin Roots electronic book is useful to introduce, reinforce, and provide practice in basic roots and cognates.

Check out how clearly the Reading Center explained Word Parts. This list of the 84 most common Greek and Latin roots includes the root word, the English meaning and examples of words. 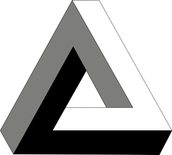 Encourage students to engage with the suffix -ology. It is used in words to name any science or academic field of study, a person who speaks in a certain manner, or someone who deals with certain topics or subjects. This OLOGY activity gives students the opportunity to investigate future fields of study.

The American Museum of Natural History has a website called OLogy. Challenge students to read a few articles within an -ology and write about the articles' commonalities. 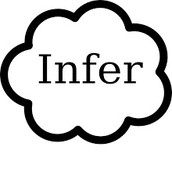 Give students this list of the 84 Most Common Greek and Latin roots. As they read independently or in small groups challenge them to find new words containing roots and suffixes. Have your students complete this Using Root Words to Infer chart with words they find in their own reading. Come back together to discuss.

Greek and Latin Influence Across the Academic Discplines

Investigate the parts of math words. Focus on roots, prefixes and suffixes using this Math Word Parts or Prefixes used in Math word list. Check out the Origins of Math Terms. 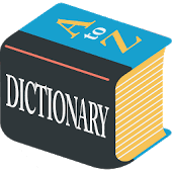 Suffix Prefix Dictionary is the most comprehensive online dictionary of biological and medical prefixes and suffixes.

Provide students with a list of roots and affixes that they are already familiar with. Combine these known roots to invent new words. Deepen the challenge by asking them to invent a word that fits into the science or social studies content. They must also compose definitions for these words. Students will then share and discuss their invented words to the class.

Make a Word Self Evaluation

Using the Greek and Latin roots and affixes will help students decipher the challenging vocabulary in the Harry Potter series. Watch

Latin Roots in Harry Potter and 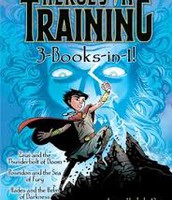 If your students aren't quite ready for thick chapter books like Percy Jackson, this series is perfect for those starting to read independently. The heroes in training are the Olympians at a younger age and while the mythology isn’t always accurate as to satisfy Classicists, it’s still a fun adventure. It also sets up the reader to slide right in to Percy Jackson. [easy chapter book, ages 6 and up]

If You Were a Prefix

Things That are Most in the World-Study the suffix –est with this wildly funny picture book.

Moostache-Study the prefix “un-“ and the suffix “y” by using the context of the story to define the “un-“ words.

Math Curse . Identify math prefixes and suffixes found in this story and in everyday math problems.

Introduce Prefixes, Root Words and Suffixes with this RAP!

https://youtu.be/ZOJrjNR7ZZM
Embed code is for website/blog and not email. To embed your newsletter in a Mass Notification System, click HERE to see how or reach out to support@smore.com
close