-South Korea has a government divided into 3 branches: executive, judicial, and legislative.

-The South Korean government's structure is determined by the Constitution of the Republic of Korea.

-This country has always had a presidential system.

-South Korea shares its traditional culture with North Korea, but the two Koreas have developed distinct contemporary forms of culture since the peninsula was divided in 1945.

-Changing economies and lifestyles have led to a concentration of population in major cities, especially the capital Seoul, with multi-generational households separating into nuclear family living arrangements.

-If you live in South Korea,you never have to leave your home to eat because most restaurants will deliver your food to your apartment of house.

-They have the biggest church in the world. 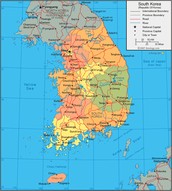 -South Korea is a peninsula.

-The only country bordering South Korea is North Korea.

-Koreans remain today a 'mountain people', who identify with hometowns and home regions that, so they argue, differ greatly from other places in Korea.

-In 1905, The Russo-Japanese War ends, and Japan gains control of Korea from Russia.

-In 1945 Korea split into North Korea and South Korea.

-South Korea has a market economy.

-In the 1997 Asian Financial Crisis, the South Korean economy suffered a liquidity crisis and relied bailout by the IMF.

-Organizations like the World Bank describe Korea as one of the fastest-growing major economies of the next generation.

-South Korea suffers perpetual damage to its credit rating in the stock market due to belligerence of North Korea in times of deep military crises.

-South Korea had one of the fastest growing economies from the early 1960s to the late 1990s.