In the Classroom, Around Campus 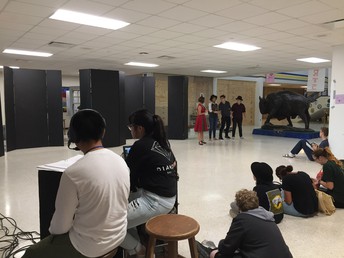 With the new performing arts center not yet ready for productions, the Thespian Club proved that "all the world's a stage" by rehearsing their production of The 39 Steps in the mall area. Four performances over three days in the cafeteria were well received by their audience. 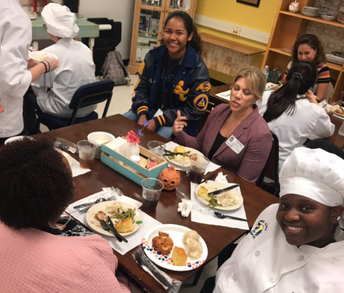 Culinary Arts students readied and served a scrumptious meal for their families towards the end of October, demonstrating knowledge of, skills in, and love for cooking. 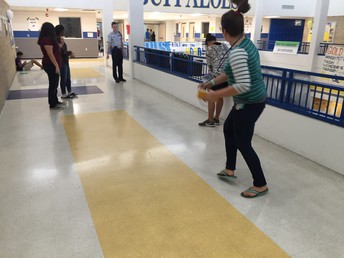 Mr. Henson's AP Physics classes took to the halls for their motion-based lab involving initial velocity of an object. 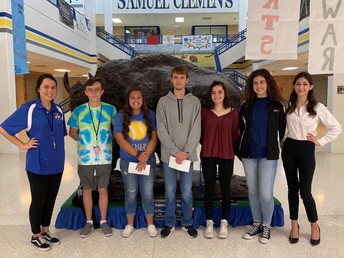 We would like to recognize our some of our seniors for earning status in the following categories: National Merit Scholarship Program Semifinalists, Commended Scholars and Hispanic recognition Program!

Samuel Clemens High School celebrated its 50th Homecoming over the weekend of October 19th & 20th, including a WIN over San Marcos. Graduates from the Class of 1968 and up were welcomed back home, proving that "once a Buff, always a Buff" will always ring true. 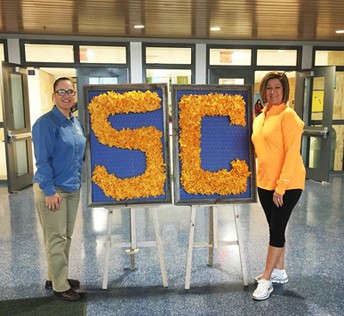 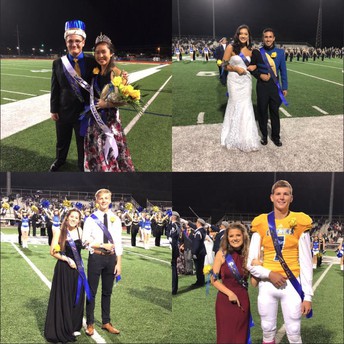 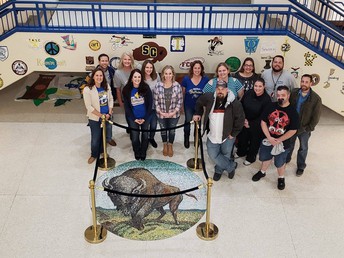 Clemens celebrates all student clubs and teams each year during the week of homecoming. Each group of students is announced and walks across the track to be honored. Our hopes is that every Clemens students is a part of an extracurricular club or team here at Clemens high school. 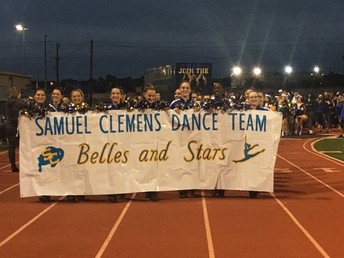 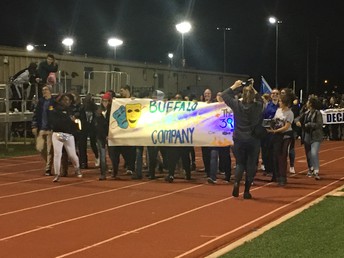 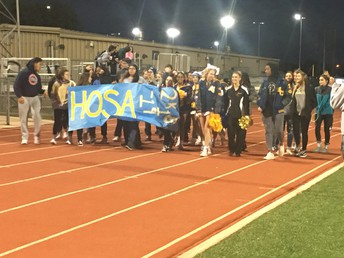 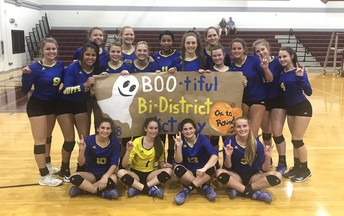 Congratulations to our varsity volleyball team for capturing a Bi-District championship with a win over Austin Bowie on October 30th. The team was undefeated district champs with a record of 14-0 and ended the season with an overall record of 36-6.

The team advances to Area, and will take on O'Connor High School on November 1st at 6:30 P.M. at Alamo Convocation Center. 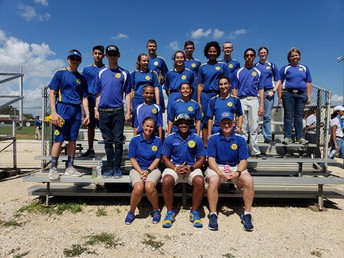 AFJROTC Competition at the Cornfield Classic hosted by Median Valley! They won a 1st place Rocketry Team Trophy and top male and female athlete awards in the physical fitness competition. 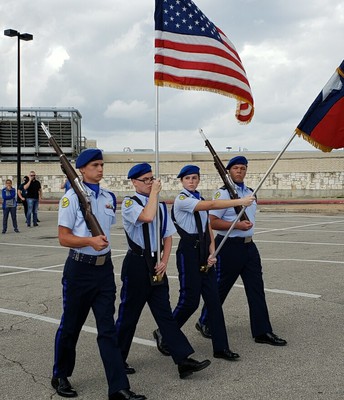 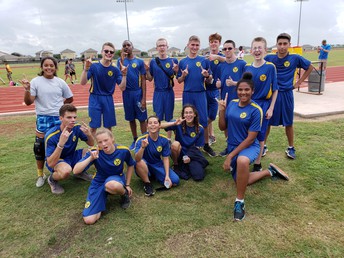 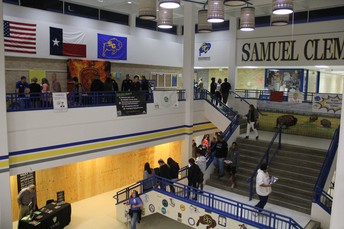 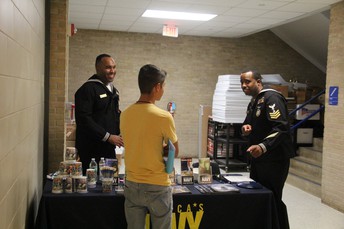 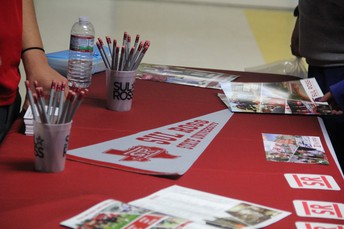 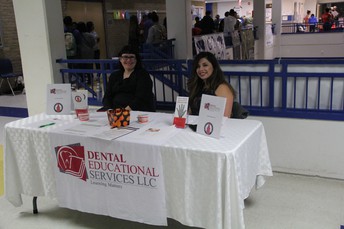 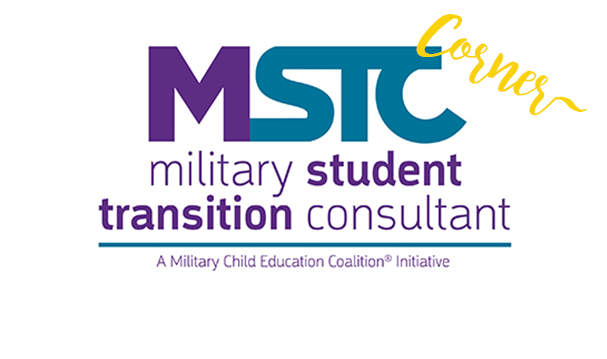 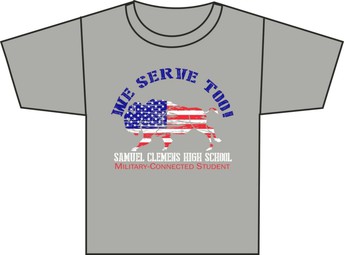 Show off your Military-Connected pride! Place your order now for our new “We Serve Too” Buff Shirts! These shirts are a softer style, and will be on sale from October 30th to November 9th. Shirts will be organized and delivered by Ms. Merrill. Anticipated deliver is November 16th. For pick up, please email vmerrill@scuc.txed.net. Non-refundable.

Order here through MySchoolBucks (link has been shortened): http://bit.ly/WSTShirt_Clemens

Click here to order a "We Serve Too" Buff Shirt

Your head aches, and so does every muscle in your body. You're cold one minute and hot the next. Your throat is scratchy and you're starting to cough. You might be coming down with the flu!

Flu Season Is October to May

If you get the flu, you'll have lots of company. Each year from October to May, millions of people all across the United States come down with the flu. Kids get the flu most often. But people in every age group — including teens — can catch it.

What Is the Flu?

Flu is the common name for influenza. It's a virus that infects the respiratory system.

Often when you're sick with a virus, your body builds up a defense system by making antibodies against it. That means you usually don't get that particular virus strain again. Unfortunately, flu viruses mutate (change) each year. So you aren't protected from getting the flu forever.

Some years the change in the flu virus is slight. So if you do get the flu, it's mild. The antibodies from having the flu before give you partial protection. But every 10 years or so the flu virus goes through a major change and many people get severe cases. These large-scale outbreaks are called epidemics. If they spread worldwide, they're called pandemics. The H1N1 ("swine flu") outbreak of 2009–2010 was considered a pandemic.

How Does the Flu Spread?

The flu virus spreads through the air when a person who has the virus sneezes, coughs, or speaks. The flu can sometimes be passed on through objects that someone with the virus touched, sneezed, or coughed on. When a healthy person touches these contaminated items and then touches his or her mouth or nose, the virus can enter their system.

People carrying the virus can be contagious 1 day before their symptoms appear and about 5 to 7 days after they first get symptoms. So it's possible to pass the flu on before you even know you're sick.

Flu epidemics often start in schools and then move quickly through a community as students spread the virus to family members and people around them.

How Do I Know if I Have the Flu?

Flu symptoms appear anywhere from 1 to 4 days after a person has been exposed to the virus. The main symptoms of flu are:

Someone with the flu may have a high fever — for example, that person's temperature may be around 104°F (40°C). People with the flu often feel achy and extra tired. They may lose their appetites. (SCUCISD requires students be sent home once their temperature reaches 100*F )

The fever and aches usually disappear within a few days, but the sore throat, cough, stuffy nose, and tiredness may continue for a week or more. In addition, the flu can sometimes cause vomiting, abdominal pain, and diarrhea.

If you have only vomiting and diarrhea without the other flu symptoms, you probably have gastroenteritis . Though some kinds of gastroenteritis are known as "stomach flu," they're not the same as seasonal flu. Some gastrointestinal infections are caused by non-flu viruses or bacteria.

What to Do If the Flu Bugs You

If you get the flu, the best way to take care of yourself is to rest in bed and drink lots of liquids like water and other non-caffeinated drinks. Stay home from school until you feel better and your temperature has returned to normal.

Most people who get the flu get better on their own after the virus runs its course. But call your doctor if you have the flu and any of these things happen:

Most teens can take acetaminophen or ibuprofen to help with fever and aches. Don't take aspirin or any products that contain aspirin, though. If kids and teens take aspirin while they have the flu, it puts them at risk of developing Reye syndrome. Although Reye syndrome is rare, it can be serious.

Antibiotics don't work on viruses, so they won't help someone with the flu get better. Sometimes doctors can prescribe an antiviral medicine to reduce the length of time a person is ill from the flu. These medicines are effective only against some types of flu virus and must be taken within 48 hours after flu symptoms appear. Doctors usually use this medicine for people who are very young, elderly, or ill or at risk for serious complications, like patients with asthma.

Vaccine to the Rescue?

So how do you avoid getting sick during flu outbreaks? Wash your hands often and thoroughly. Avoid sharing cups, utensils, or towels with others. If you do catch the flu, use tissues whenever you sneeze or cough to avoid spreading the virus.

Everyone older than 6 months should get a flu vaccine. Your doctor will probably recommend that you get one.

Flu vaccines are available as a shot. The shot contains killed flu viruses and will make your body create antibodies that fight off infection if you come into contact with the live flu virus. If you have an egg allergy, get your flu shot in a doctor's office, not at a supermarket, drugstore, or other venue.

Most people don't have reactions to a flu shot, although a few may notice a fever, sore muscles, and tiredness.

The flu vaccine is usually given a few weeks before flu season begins to allow the body time to develop antibodies beforehand. But you can still get a flu vaccine even after flu season starts.

If you do get the flu this season, take care of yourself and call your doctor with any questions or concerns. When you're feeling bad, it can help to remember that the flu usually lasts a week or less and you'll be back to your normal activities before too long.

Painting with the Buffs

Come paint with the Buffs with classes taught by SCHS Art Club! This class is open to the public during two (2) different time slots on Friday, November 30th, in the art classrooms. The first time slot is at 5:00 PM, with the second at 7:00 PM. (Please park in the rear of the school.) Classes are $20 per participant and includes all supplies, as well as snacks and drinks. Participants can choose from two different holiday-/winter-themed paintings. Samples to be posted to the Facebook event page once finalized by Art Club. Reservations available through MySchoolBucks.
Get Directions 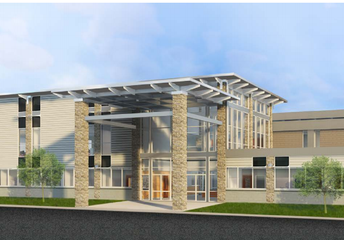 Follow Dale Seiler
Contact Dale Seiler
Embed code is for website/blog and not email. To embed your newsletter in a Mass Notification System, click HERE to see how or reach out to support@smore.com