The party knew that, to stay focused on a goal, you need to take away anything that may cause an individual to lose focus. The goal, in this case, was to attain loyal citizens and keep this loyalty and love for the party. What the party would take away were the things that gave the citizens pleasure. They were not allowed to have sex, unless it was to reproduce. They could not buy the amount of pleasure goods they desired such as chocolate, tobacco, or coffee because of the rations the party put in place. But why?

The party did these things because they didn't want there to be anything so enjoyable that it would outweigh an individuals love or loyalty to the party. They wanted the citizens to find enjoyment in the fact that they have the opportunity to live under a powerful leader in a society where "Life is significantly better than it was 20 years ago" as the party would claim. Ultimately, the party succeeded in making the citizens believe that the things that would bring them pleasure, such as sex, were not things that they should perceive as desirable. They did not want these people to become comfortable and confident from pleasurable activities and goods. They felt that if the citizens were comfortable and confident then they would rebel against the party.

The citizens may not have realized what was happening, but it seemed to work. The party wanted the citizens to stay focused on their goal of staying loyal to the party, and the party facilitated this by the repression they forced upon the citizens.

"The aim of the Party was not merely to prevent men and women from forming loyalties which is might not be able to control. it's real, undeclared purpose was to remove all pleasure from the sexual act. not love so much as eroticism was the enemy, inside marriage as well as outside it. All marriages between Party members has to be approved by a committee appointed for the purpose, and - though the principle was never clearly stated - permission was always refused if the couple concerned gave the impression of being physically attracted to on another. The only recognized purpose of marriage was to beget children for the service of the Party. Sexual intercourse was to be looked on as a slightly disgusting minor operation, like having a an enema. This again was never put into plain words, but in an indirect way it was rubbed into every Party member from childhood onwards. There were even organizations such as the Junior, Anti-Sex League, which advocated complete celibacy for both sexes. All children were to be begotten by artificial insemination (artsem, it was called in Newspeak) and brought up in public institutions. This, Winston was aware, was not meant altogether seriously, but somehow it fitted in with the general ideology of the Party. The Party was trying to kill the sex instinct, or, if it could not be killed, then to distort it and dirty it. He did not know why this was so, but it seemed natural that it should be so. And as far as the women were concerned, the Party's efforts were largely successful"

-This quote shows how the party members were suppose to perceive sex. It confirms the idea that the Party as a whole wanted to deter people from having sex. 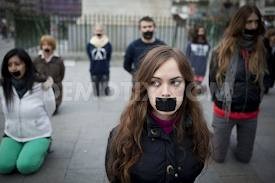