Ernest once took a urinal home from his favorite bar and moved it into his home, arguing that he had “pissed away” so much of his money into the urinal that he owned it. 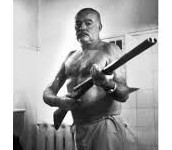 Ernest Hemingway killed himself with his favorite shotgun bought from Abercrombie & Fitch.

During his 62 years, he married four times and divorced three times.

Ernest Hemingway once published a recipe for apple pie in his column. In fact, he had a lot of recipes for food, and some of them even ended up being museum pieces like his hamburger.

Ernest Hemingway took a job working for the Toronto Star as a freelancer, staff writer, and foreign correspondent.

In the Florida Keys, there are a lot of 6-toed cats, because Ernest Hemingway’s cat “got around” a lot.

According to Hemingway, his eyelids were particularly thin, causing him to always wake at daybreak.

The mother of Ernest Hemingway often dressed young Ernest and his older sister in matching pink flowery dresses (and similar outfits) to fulfill her obsessive desire to instead be mother to a pair of twin girls.
Ernest Hemingway

For the last two decades of his life, the FBI had a file on Hemingway, while J. Edgar Hoover kept a close eye on Hemingway during the 1950s.

He once hit a critic who’d given one of his books a bad review.

Hemingway underwent shock therapy to treat his manic depression (bi-polar disorder). The treatment obliterated his memory, which made it impossible for him to write. This was the catalyst that sparked his desire to commit suicide.

Hemingway once said that he can’t think of any better way to spend money than on champagne. 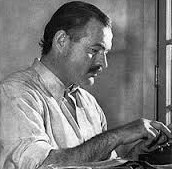 Hemingway got drunk and slept with a bear.

He was a KGB spy. He grew paranoid in his last few years of life and believed that FBI was spying on him.

There’s a popular tale circulating about Hemingway betting fellow writers that he could write a short story in just six words. The story goes that Hemingway gave them: “For Sale: baby shoes. Never worn,” and he won the bet.

Ernest Hemingway used to hunt German U-Boats in his fishing boat with direction-finding equipment, a machine gun and hand grenades.

Hemingway left trunks of material in the Paris Ritz in 1928 and did not recover them until 1957.

Ernest Hemingway wrote A Farewell to Arms, a novel about World War I, which was published in 1929.