Get email updates from Kenzie:

You must not lose faith in humanity. Humanity is an ocean; if a few drops of the ocean are dirty, the whole ocean does not become dirty.
In the Footsteps of Gandhi: Welcome
Gandhi's granddaughter, Ela Gandhi's message to those thinking of visiting South Africa

Born on October 2, 1869 in India, died on January 30, 1948, Mohandas Karamchand Gadhi spent the majority of his adult life fighting for the civil rights of the Indian people. In his younger years Gandhi strived to become a doctor, but after his father's passing, Gandhi followed his father's desires and moved to London to attend law school. At first, Gandhi wasn't a successful lawyer. In 1893, he obtained a one-year contract to provide legal service and sailed to Durban, South Africa. It was there that Gandhi was first exposed to apartheid's segregation against Indians, and where his civil rights/peace campaign began. After the beginning of World War I, Gandhi headed to London for a couple of months, then in 1915 returned to India. India was still under strict British rule at this time, reawakening Gandhi's fight for Indian's civil rights in 1919. After two arrests, many protests and marches, and multiple weeks of fasting, Gandhi's health deteriorated. In 1948, a fellow Hindu had become very angry that Gandhi showed sympathy for the Muslims and assassinated him. Gandhi never got to see an independent India in his lifetime, but his commitment to non-violence is still seen today as a beacon of hope for those oppressed. 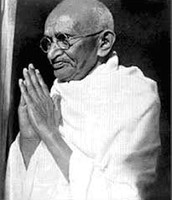 "perhaps the mightiest instrument on earth"

Although Gandhi was not able to change many of the oppresive apartheid laws himself, he changed the mentality of all of those fighting for civil rights. After Gandhi's first year in South Africa, he was told of a bill that would limit voting to only white citizens. This outraged him, and he immediately drew up a petition and set a committee. The committee became the Natal Indian Congress (NIC). With the NIC and 10,000 signatures backing the petition, Gandhi brought it to the Colonial Secretary. The bill was only temporarily set aside, but Gandhi's followers and message had already begun to spread. This concept, referred to as Satyagraha, urged followers to risk going to prison instead of following the laws they believe are unjust. These practices were seen throughout South Africa with the burning of passbooks and the later strategies of the ANC and PAC to overflow the prisons. Gandhi's Satyagraha began an extremely powerful movement in South Africa, a movement that lead to the eventual downfall of the apartheid system.
Gandhi's first protest (in South Africa)
A scene from the movie "Ghandi" shows a more timid Ghandi giving his first political speech in South Africa.

"Follow in the Footsteps of Mahatma Gandhi, Who Spent 20 Formative Years Living and

Parliament. During His Speech, Modi Spoke about the Statue of Mahatma Gandhi in