Where Does Our Water Come From?

60% of the water in Texas comes from aquifers that are underground. The rest comes from rivers or lakes, which are above ground level. However, Texas receives little rainfall, so many of these sources are drying up. Drilling down to reach deeper aquifers is costly and often unsuccessful. This is a huge problem. 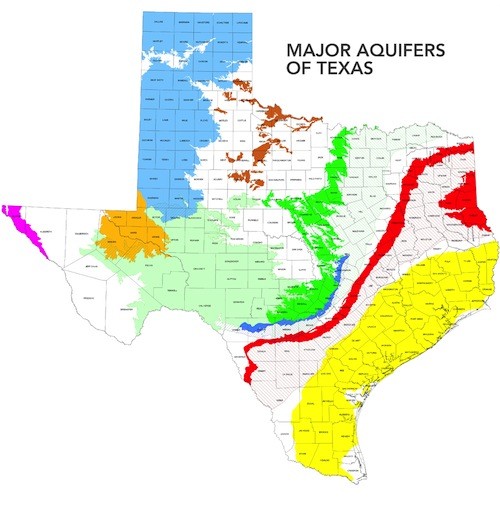 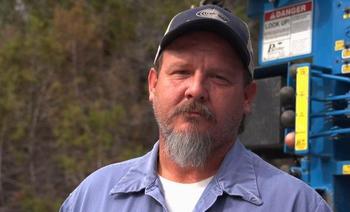 video.pbs.org
The ongoing drought in Texas continues to take its toll on water supplies and, with an estimated one million wells across the state, many Texans are running into problems accessing groundwater. That's meant a lot of work for well drillers like Charles Barnard who was working yet another Saturday when we met him. Watch online: Texas Dispatch: Drilling Deeper for Water from PBS NewsHour. On demand, streaming video from PBS

Where is All of This Water Going?

Approximately 711 gallons of water are pumped out of the aquifers, rivers, or lakes, and used by people in Texas each and every day. 60% of that water is used by Agriculture, 25% is used by residential homes, and the remaining 15% is going to Industries.

Using so much water in agriculture is unnecessary. One solution here is to not have so many animals on the farm. Over half of the crops grown in the U.S. are fed to animals, not people. Also, 70% of the world's freshwater is given to animals! These animals also pollute water with their wastes. Reducing the number of animals on farms would greatly improve the efficiency of farms and help conserve water. 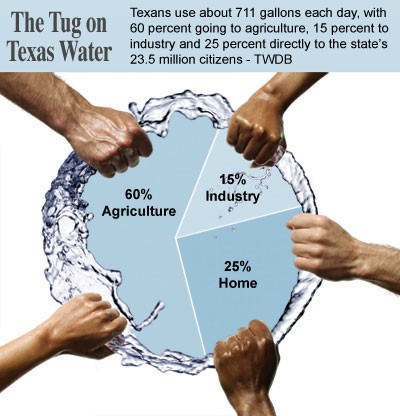 Here is an interesting article that is about how much of the world's water and crops animals consume.

Half Of World Crop Is Feeding Animals, Not People

www.treehugger.com
These figures (more after

When Will We Run Out Of Water In Texas?

Many areas in Texas are already facing water shortages and feeling the consequences of the intense droughts. We will eventually run out of water if this continues. Different sources have different views, but once source says that by 2060, the demand for water in Texas will increase by 130%, meaning to be over double of what it is now, and ground water supplies will also decrease by almost one-third by 2060. At the moment, we do not have enough supply to meet the demand during droughts. If these projections hold true, we could be in a lot of trouble during future droughts. This is as a result of a rapidly growing population and mainly how the agriculture industry handles their own water usage.

Lake Travis and Buchanan, two major suppliers for their areas, provide evidence of this long drought. According to LCRA, the amount of water flowing into these two lakes was the lowest ever in 2011, and was still only 32% of the average in 2012. This is alarming news.

Here we can visualize the loss of inflow. 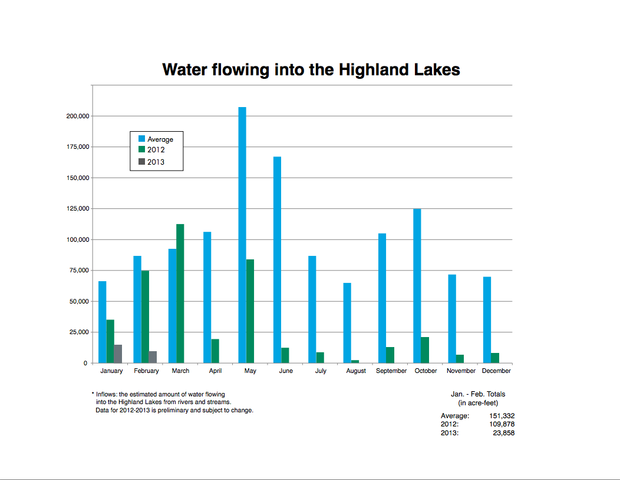 How is Our Water Usage Impacting Texas and The World?

Our water usage, along with agricultural and industrial uses, have increase the frequency and length of droughts. People in Texas, especially farmers, felt the impact in the summer of 2011. Some farmers had all of their crops destroyed because of this one drought.

Texas also produces more cotton and beef than any other state, and with little water, prices would be expected to go up. This is huge because cotton is used for many clothing products, and beef has become a very popular product because of the increase of fast food chains. This has hurt not only the economy of Texas, but also the whole economy of the U.S. Each of the droughts in the past 10 years has costed the agricultural industry between 1 and 4 billion dollars. Many people could lose their jobs as a result.

The drought of 2011 also brought severe wildfires that destroyed many homes and thousands of square miles. Many species of animals have been forced to move because of the dry conditions.

Here is a gallery of some of the effects of the droughts in Texas.

Firefighters help fight a wildfire that destroyed a home in Austin as a result of the drought in 2011.

A cow is looking for food on dried up land.

A rancher looks down on an empty field after nearly all of his planted crops were destroyed by a drought.

Why Should You Help?

Droughts are become longer and are more severe than ever before. 2011 brought the worst single year drought in Texas history. The droughts have brought wildfires that have many homes and destroyed thousands of square miles.

Also, as water supplies decrease and populations increase, demand for water will increase very quickly. This would cause water costs to rise and your utility bills to pile up.

The government of Texas has realized the issue and came up with a plan that will cost $53 billion dollars. It includes new finding new reservoirs underground and better conservation in the agricultural industry. Hopefully this will help, but more needs to be done.

If we, including agricultural industries, don't address the problem and work to better value water, we could be left with no water very soon and the effects of the droughts could get much worse. Water is essential for life, so that is definitely something we do not want to happen.

How can You Help?

If We Want To Overcome These Record Droughts, Everyone Needs to Help. That Includes You!

Conserving water at home can be a simple and effective way to help reduce droughts, but the main focus should be in agriculture and problems at a larger scale. Here are some simple ways to help that you probably had not thought of:

If the agriculture industry and people like you help by taking care of water, we can decrease the frequency and severity of Texas droughts, to put this issue behind us once and for all. Your actions can make all of the difference.

stateimpact.npr.org
Map by NOAA As the 83rd Texas Legislature convenes next week, there's considerable pressure on lawmakers to do something about the state's water woes, whether it be funding water infrastructure, increased conservation or even

www.time.com
Soaring temperatures have kept the Lone Star State dry as a bone and ensure the drought will have a huge, negative economic impact on the U.S. and the world 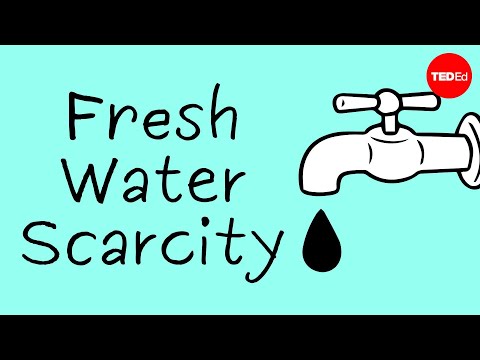 ed.ted.com
Fresh water is essential for life -- and there's not nearly enough of it for the world right now. Why is that, and what could we do? Christiana Z. Peppard lays out the big questions of our global ...