Of Mice and Men Background Info

By: Christian Hangey and Thomas Geiger

Of Mice and Men Background Info

By: Christian Hangey and Thomas Geiger

In 1929, the stock market crashed and America went into a downward spiral. The economy kept suffering, and banks kept closing. People from all over couldn't feed their own families, and at certain points over 20% of the country was unemployed. Farmers with tons of food but no means of gathering it couldn't do much while others stood in line at soup kitchens for the starving. However, the Dust Bowl ruined the fertile soil of the Midwest when giant dust clouds rolled across the nation. Migrant workers moved all the time to do work that fit the season. It wasn't a fun time to try to survive, to say the least.

Republican Herbert Hoover believed that the government should not directly intervene with the economy, so he thought it wasn't his responsibility to create jobs and save the country from the economic breakdown. However, when the Depression was at its worst in 1933, Democrat Franklin Delano Roosevelt took over and started to build a strong foundation for the country again. His optimism started providing aid to the struggling nation. After a couple more dips, the country rose again in the 1940s. Perhaps the war did have at least one good side effect, since America rose economically again. 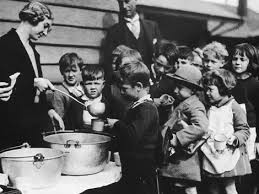 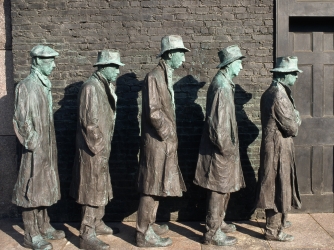 www.history.com
Find out more about the history of The Great Depression, including videos, interesting articles, pictures, historical features and more. Get all the facts on HISTORY.com

5 Ways the American Dream Is Protected

useconomy.about.com
The American Dream was first outlined in the Declaration of Independence, which legally protects each person's desire to pursue happiness.

John Steinbeck was an author most famous for his works during the panic of the 1930s. His writing was famous for its sometimes grim outlook and relation to the times in which it was written. He started out with 3 unsuccessful novels, but eventually became famous for his more complex and realistic works. Since he was raised in California, many of his novels took place in that setting. Strong interactions between different social groups were popular in his books, as well as how people were getting by in the hard times of the Depression. Themes like friendship and the struggle to improve life show up in his books based in these times.

"Tortilla Flat" was the first book that sold well and showed his abilities as an author. His first truly grim work was "In Dubious Battle". The next year, "Of Mice and Men" came out and received even more acclaim. "The Grapes of Wrath" dealt with the Dust Bowl and the hard economics of the Great Depression. Books like "Cannery Row", "The Pearl", and "The Bus" came out after World War 2. These weren't as rough as his earlier works, but the Depression was over and the rise in attitude was apparent through his novels. He did write more books in the future, but none of his later works were as talked about as "East of Eden". His works from the 1930s were his most famous for its relationships and the the hard work necessary for characters to survive, as well as the horrific economy of the time. 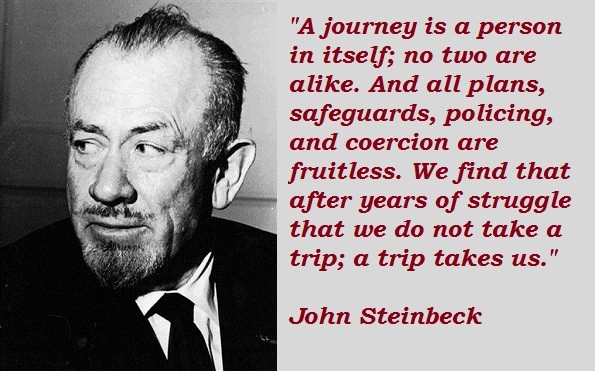 www.gradesaver.com
John Steinbeck was born in Salinas, California in 1902. He spent most of his life in Monterey County, which is the setting for much of his fiction....