Get email updates from KCSD:

We made it! Summer is here!

We will keep you updated over the summer through social media, our website, and our KCSD & Me email list. If you do not already and want to receive this newsletter in your inbox, click on the Follow KCSD Communications button and subscribe.

We are down to the last day of school and I expect everyone will be happy to put this year behind us. It has been challenging and, at times, extremely difficult in both our school and personal lives.

As I look back at what we have all been through, I would like to thank you for your flexibility and your willingness to adapt, again and again, to the fluctuating rules that we all had to endure. You adjusted (sometimes overnight) to changing instructional models, going from distance learning, to hybrid, to in-person, and back again.

At the beginning of the school year I promised you that students would be in classrooms as much as possible. Thank you to families, students, and especially district staff for helping me keep that promise.

The plan for next fall is to operate school as normal. I expect to have all students back full-time, five days a week with no masks and no quarantines, unless the governor mandates otherwise.

I attended graduations this past weekend and watched with pride as seniors received their diplomas. They successfully completed this educational milestone during what had to be a most difficult year. Despite the pandemic, our schools, families, and communities appear stronger than ever. We faced challenges together and found ways to thrive.

Again, thank you. I am proud of our Klamath County School District team! Have a relaxing and rejuvenating summer. 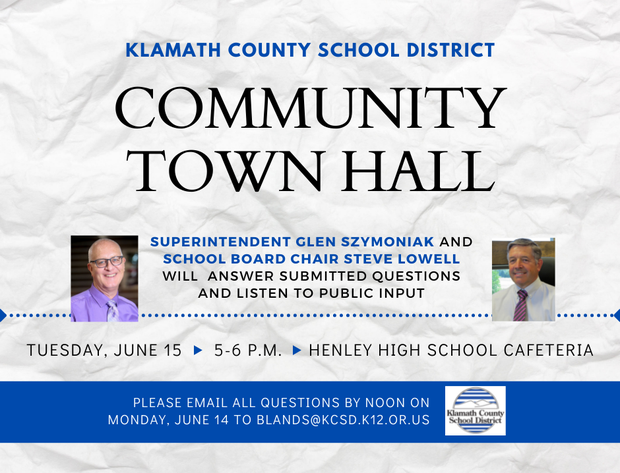 Have questions for Klamath County School District leaders? Get them answered at our Community Town Hall next week. The first step is to email your question to Stephanie Bland at blands@kcsd.k12.or.us by noon, Monday, June 14. KCSD Superintendent Glen Szymoniak and School Board Chair Steve Lowell will provide answers to submitted questions and listen to public input from 5-6 p.m. Tuesday, June 15 in the Henley High School cafeteria. Please join us!

Thank you to the 1,189 people who took our recent survey and to the more than 50 people who helped us write our strategic plan in spring 2020. Your input has guided us in prioritizing our goals and spending. Follow the link for a message from Superintendent Glen Szymoniak about our plans for CARES Act funding: http://www.kcsd.k12.or.us/SectionIndex.asp?SectionID=16

Two of the questions on our recent survey asked specifically about CARES spending. Below are those questions and a summary of your responses. We'll publicize results of SIA (Student Investment Account) questions in an upcoming newsletter.

What should the district’s priorities be for one-time CARES Act funding?

What other items specific to COVID-19 impacts would you like the district to prioritize using CARES Act funds?

The school district will offer its free Grab-and-Go meal programs this summer. Meals are provided to students attending our summer school programs and also are available for pickup by all students. See below for details or click HERE for a flyer. 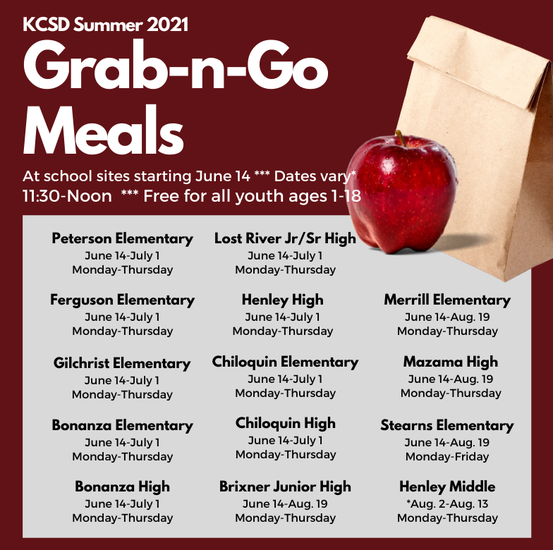 KCSD is offering free fun learning camps for K-6 students and adventure vouchers for all K-12 students who attend a KCSD school! Click HERE for details and registration. 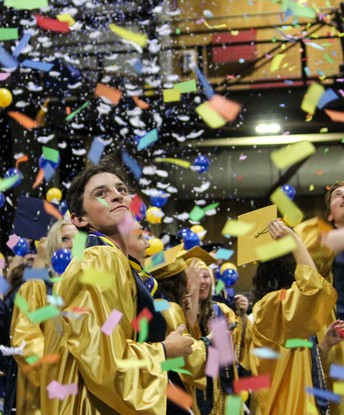 Congratulations to the Class of 2021!

Nearly 400 seniors graduated this past weekend from Klamath County School District’s seven high schools and its homeschool program. We had 17 valedictorians and 11 salutatorians. Of seniors who responded to surveys about their future plans, 104 plan to attend a four-year college, 90 plan to attend a two-year community college, 67 are entering the workforce, 34 plan to enter a vocational/trade program, and 19 plan to join the military.

“This year’s seniors have persevered through educational, social, and personal challenges. The resiliency these graduates have demonstrated to successfully complete this milestone will serve them well in life.” -- Superintendent Glen Szymoniak

Check out all of our graduation ceremony photos by clicking on the school name or a photo (see photo gallery at the end of this newsletter). 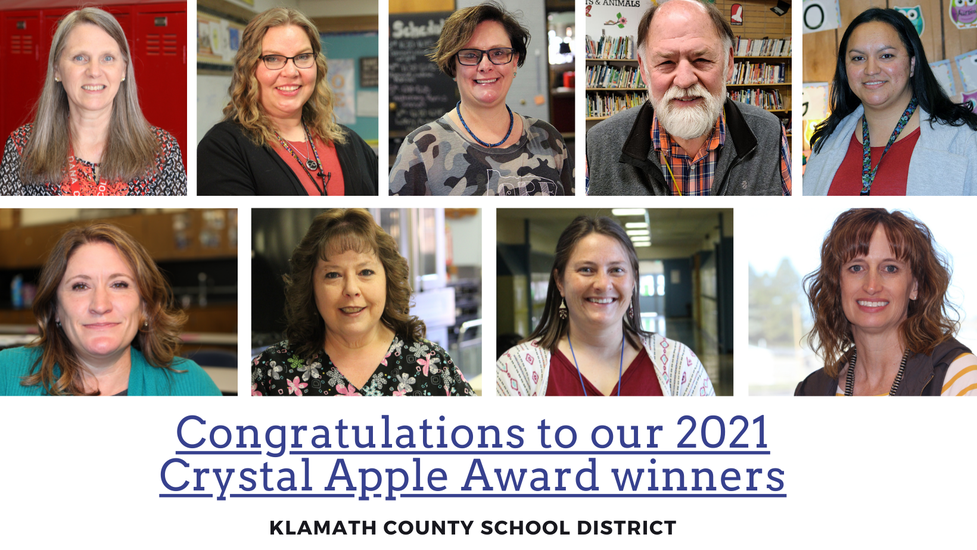 The Klamath County School District each year awards Crystal Apples to nine employees who best exemplify our mission: “Inspiring today’s students to meet tomorrow’s challenges.” Talented videographer Ron Matchett produced videos introducing our KCSD community to these outstanding individuals. You can watch them all on our YouTube channel: https://www.youtube.com/playlist?list=PLxsVf1dSqNlbAVyHZkjOtGIyQNdCe9u53.

Congratulations! Check out the article and photos on Klamath Sports Network. 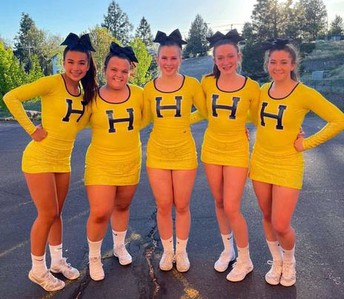 Congratulations to our Henley High Cheer Team! The Henley High School Cheer Team won the 4A State Championship in the nonbuilding competition, and also claimed first-place in the stunt group 1A-4A category.

The five-member team coached by Aubrey Westfall pushed through a postponed season, finally competing virtually with teams around the state on May 15. Team members are Tatiana Briones. Maya Rea, Sapphire Honeycutt, Kelsie Felsinger, and Lexi Dolan. For seniors Lexi and Kelsie, this is their second state championship. 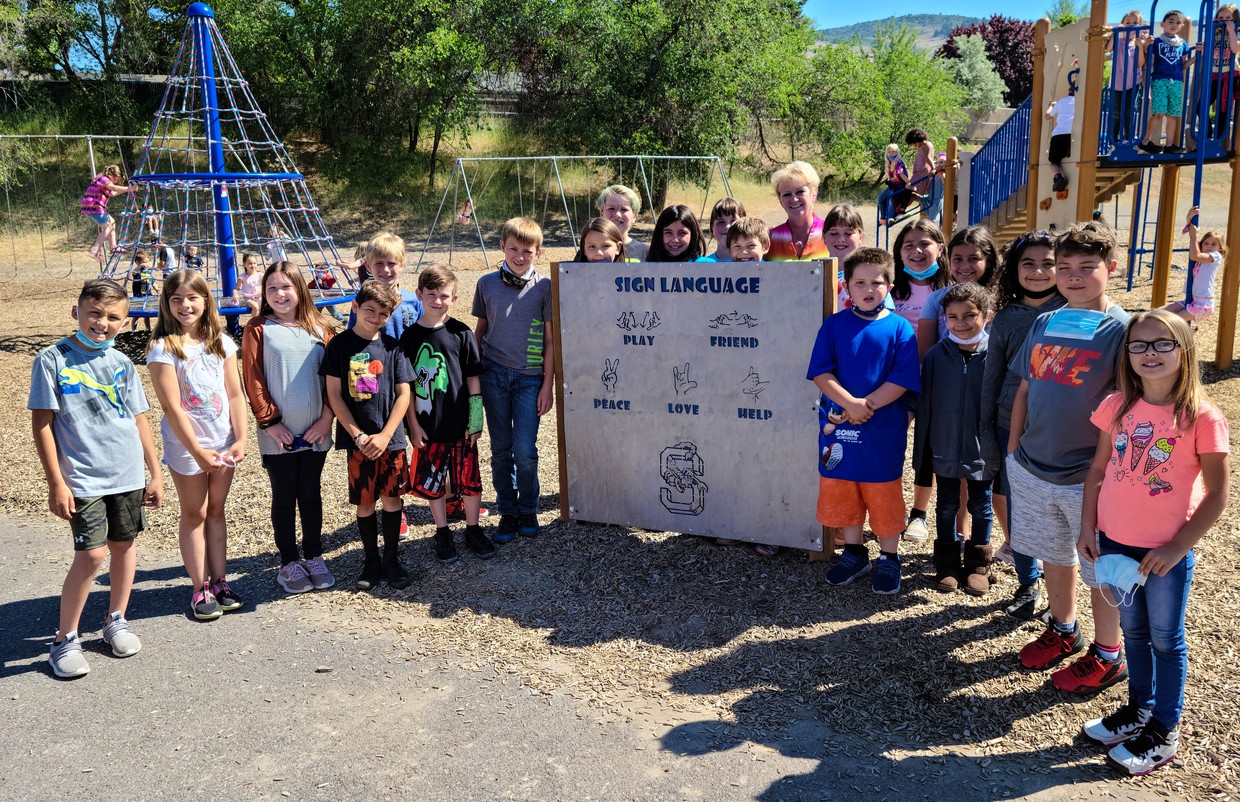 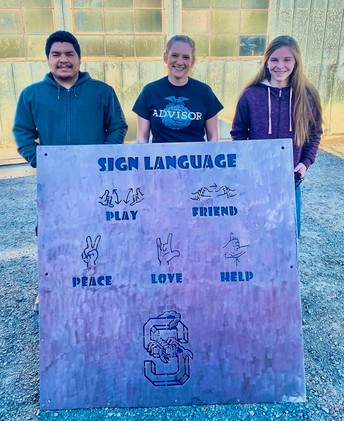 Students at Shasta Elementary School can now communicate with their deaf and hard-of-hearing classmates on the playground – asking them to play, be their friend, or for help.

Dena Morosin’s fourth-grade class came up with an idea for a metal sign that displays how to say certain words in sign language. All elementary deaf and hard-of-hearing students attend Shasta, where they have access to interpreters and are mainstreamed into regular classes with their peers.

Teachers at Shasta often teach simple sign language throughout the year so students can communicate with each other. The new playground sign takes that one step further. “It was the students’ idea,” Morosin said. “They wanted to do a school project, and we talked about kids who may not feel included.”

Morosin’s class participates in the Classroom Champions program. At the beginning of the year, the class was assigned a mentor – two-time Paralympic gold medalist Deja Young – who talks virtually to students about character building skills and encourages them to do community service projects throughout the year.

Fourth-graders Ginny Guest and Eliza Jolly said the class decided they wanted to do something that would help them talk with their hard-of-hearing classmates. “If you wanted to be their friend, you didn’t really know how to tell to them,” Eliza said.

Shasta Principal Randy Rose, who helped install the 150-pound sign, was pleased with the project. “It educates kids on how to sign simple words so hard-of-hearing students can feel like they are part of our school,” he said.

Students came up for words to put on the sign -- play, friend, peace, love, and help. Each word has the sign language symbol above it. The sign was made by Alan Lopez and Ellie Huffman, students in Anna Aylett’s ag mechanic and leadership class at Bonanza Junior/Senior High School. Cost was about $150 for materials, which was paid for by Shasta Elementary School. 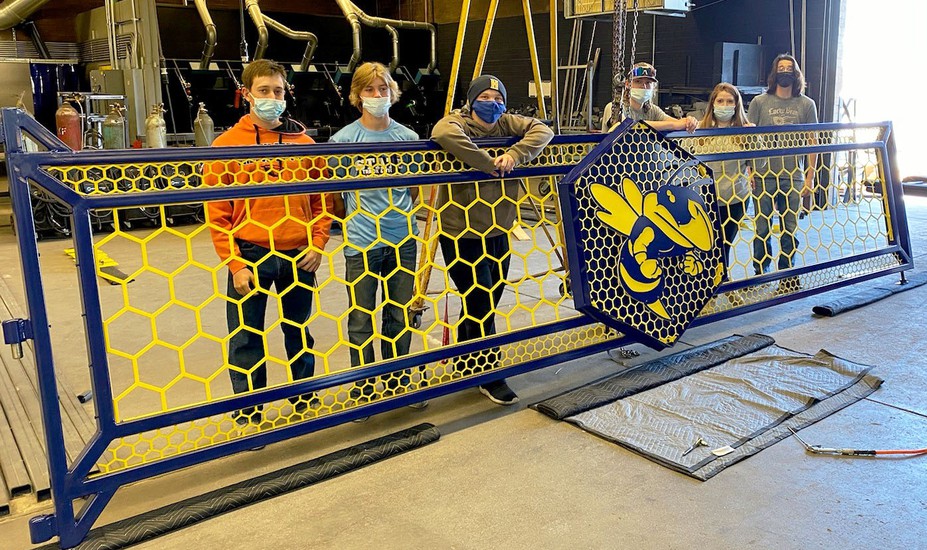 Henley CTE ag mechanic teacher Chris Aylett and his master technician students built a new gate for the high school's main entrance. Installation was scheduled for today. "This project is one of many going on around school that highlights the valuable skills our kids are learning," said Jack Lee, principal of Henley High School. The students also are a building a smaller gate for the entrance to Henley Middle School. By taking on this project they saved the district more than $10,000. Fantastic job! 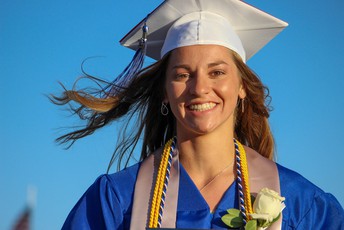 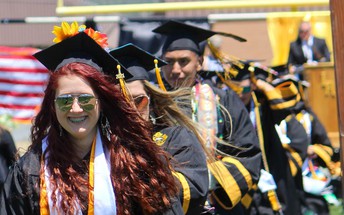 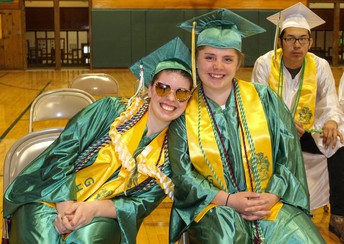 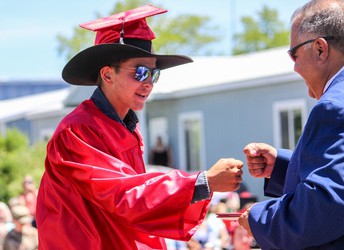 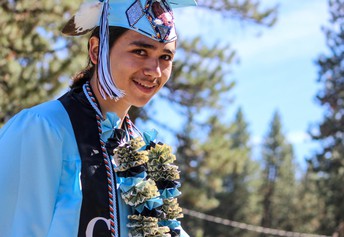 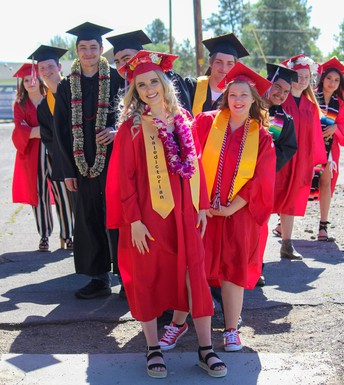 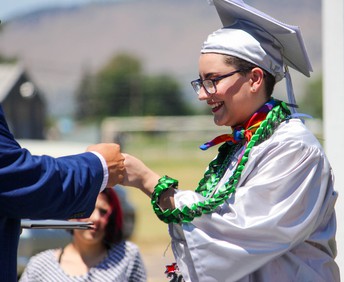 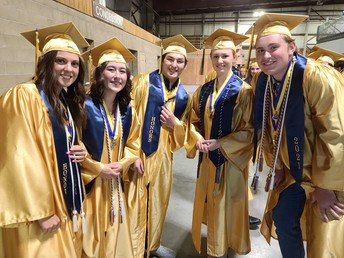 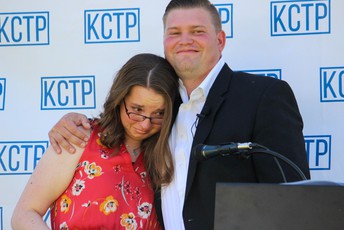