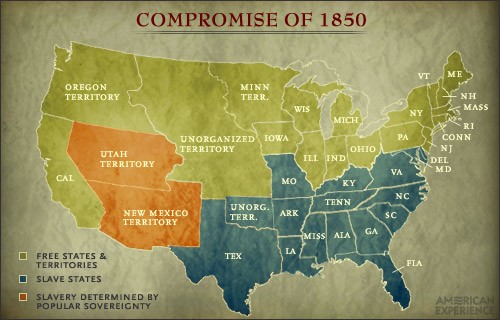 After the U.S. won the Mexican War, it gained the mass of land of the Mexican succession. As people migrated to territories in the land of the Mexican succession and called for statehood, the expansion of slavery became a major political problem. Drafted by Henry Clay, the Compromise of 1850 diffused tensions over this problem. Composed of Five separate bills, the Compromise of 1850 allowed California to enter the union as a free state while the rest of the Mexican succession was split up into two territories that would have popular sovereignty. Further more Texas was to cede a large portion of land to the federal government and I return the government would shoulder some of its debt. Finally the buying and selling of slaves would be illegal in Washington D.C and a new fugitive slave law would be enacted. While neither the anti-slavery north nor the pro-slavery south was completely happy with the terms of the compromise, it favored the anti-slavery group. The Compromise's enactment pushed off the threat of war, but made tensions rise and led to the situation that made the Civil War possible.

The Compromise of 1850 created the sectional tension that led to the violence of the Civil War. Popular sovereignty given to the territories created a power struggle between pro and anti slavery groups. Each group wanted their ideal to be declared for the state, as each state held seated in the Senate and the House of Representatives. This in turn led to events, such as Bleeding Kansas, that were death blows to inter sectional harmony within the United States. The new fugitive slave law enraged the north. As many northern abolitionists tried to protect slaves, southern slave owners became enraged at the north's overt protest and interference in slavery. This polarized the nation further, increasing tensions on both sides. Finally this compromise led to the imbalance in power that made southerners fearful that slavery would be abolished, and desperate to stop it from happening.