The game has 3 levels. The first level is about exploring the city , the second level is about imaging the city and the third is about the designing the city. All three levels have the same requirements . The mission is to realize city's architectural continuity and entirety. The game's story is delivered by facebook admin via facebook messenger. The players aim is to discover the city's unknown features in order to learn the city's own identity. This feeling can encourage players to continue to exploration.

Each level has different destinations so each player has to finish one level’s points completely to pass another. For joining the game, players must have a Facebook account and need to like Tourban Project page (https://tr-tr.facebook.com/tourbanproject/). In order to complete the missions, players have to accomplish game challanges and missions given by Facebook admin.

An architect student (his name is Selim) has a dissertation on designing new iconic construction. Firstly he goes to some libraries for doing some research. One day, while he is working in library, he falls asleep. He has a dream about Seljuks lived in Konya once and some well-known charactersof Seljuk history. He gets influenced from this dream and then decided to visit Konya City for getting more information about the Seljuk's heritages and remains. He plans some short toursof the city and starts to analyze some monumental architectural buildings from past to modern time. He needs to recognize the entirety of the city's old historic site and its new modern places. Thus he plans some short trips including historical buildings and the modern ones. After his visit, he has some substantial ideas about Konya's architectural entirety to design a compatible building style. When players stop in each spot, they can see the city's architectural spectrum. Moreover, each route has some missions and challenges that encourage the players to realize the artistic details of the artifacts. If the players finish the whole game visiting all routes , they will have the big picture about the design of the buildings , their ornaments , architectural technics etc.

1. Challenge: “Discover the root & Explore”. The biggest difficulty is the long distances between the routes. Locations of those attractions in the city are complicated and hard to reach easily. However the mission of the hero is to follow these destinations one by one accomplishing the given missions. The hero could only solve this challenge with his self-determination skill.

2. Challenge: “Reinforce your knowledge”. The difficulty is that the game requires some research and knowledge about the history and the artistic designs of the structures' features. The hero needs to reach that technical knowledge about the architecture of those historical buildings. The hero can accomplish this challenge with his research skills.

3. Challenge: “Feel the entirety ” The difficulty in that process is that the game has several routes to finish. The points include old and new buildings that scattered all around the city center. The hero can accomplish this with his research and cognitive skills. 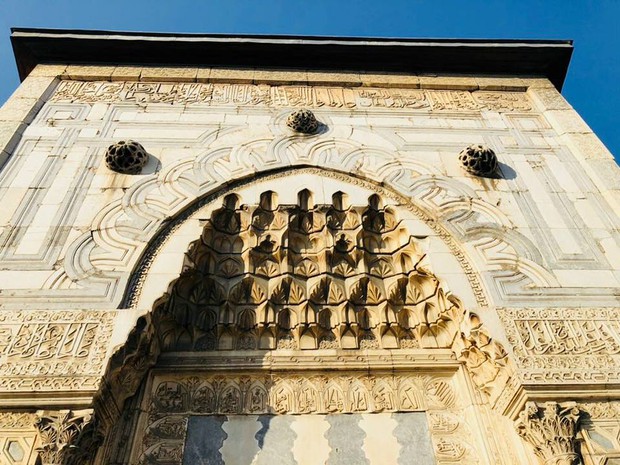 Whole game is implemented at the Facebook page of Tourban Project. The players will receive instructions, missions and challenges from the admin and they are expected to share photos with the necessary hashtags in order to pass each level successfully. 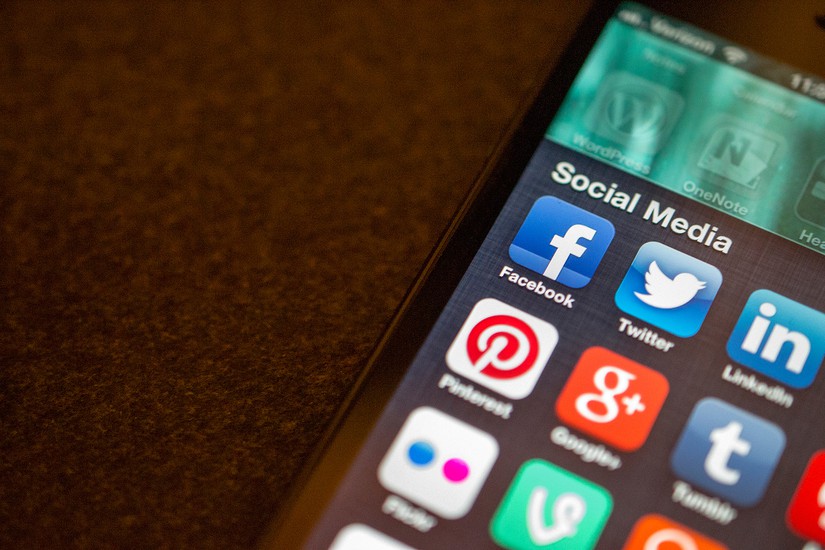 Players are generally visitors of Konya from different age, statues and jobs (mostly young people and students). Each player can see the game info on social media so they have the game information. They are given game missions from facebook page and they are expected to follow the game process via the facebook page.

This game is playable on social media and it has been the first implemented game in terms of Konya’s tourism activities. Increasing awareness and promoting Konya's touristic destinations, the game contributes the tourism potential of the city. Especially visitors of the city can exceed their acquaintance about the city. Game players can make contact with each other on the facebook page. Additionally, shared photos and other posts related this game can attract several people’s attentions. 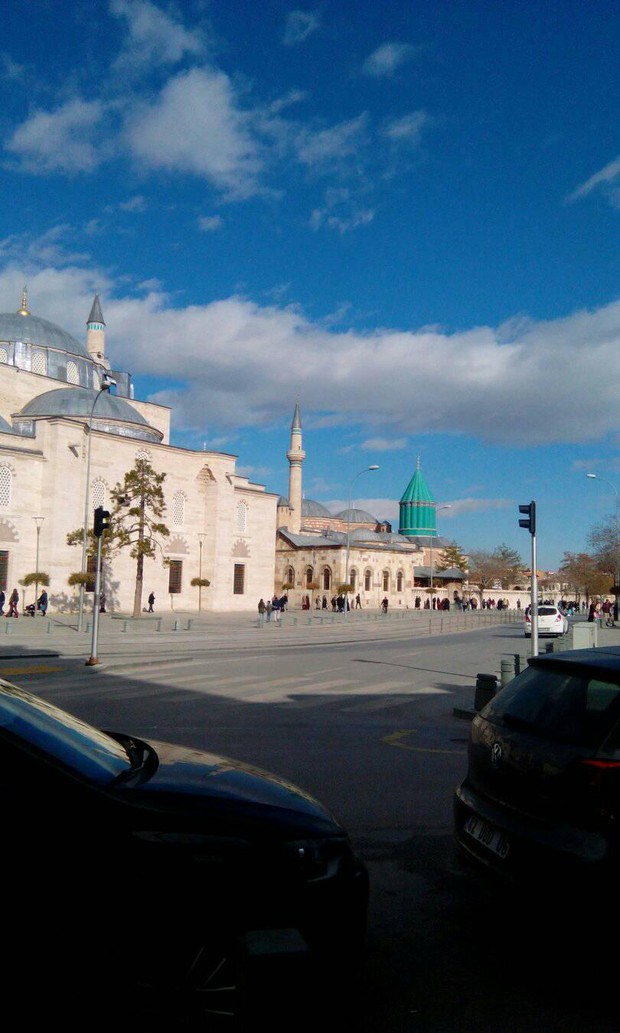 The first three players who finish all three routes in the shortest time will get the rewards. Rewards are mind games (such as GO, Reversi and chess). Moreover each participant can get some small promotional presents at the end of the game. The game is designed by Sertaç YÜRÜK and Osman Süreyya Kocabaş from Konya Science Center and you could find some details of the game in the video below presented by Sertaç YÜRÜK. The whole video of the game will be available in MOOC soon.
kısa 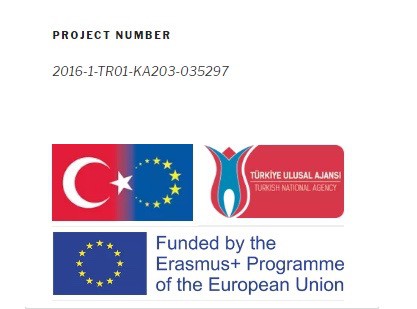 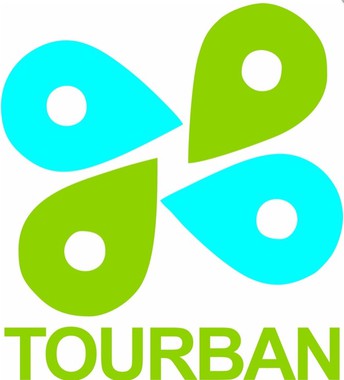 Facebook @TourbanProject
“Funded by the Erasmus+ Program of the European Union. However, European Commission and Turkish National Agency cannot be held responsible for any use which may be made of the information contained therein.”
Yaka Mahallesi, Necmettin Erbakan University Campus Koycegiz, Demeç Sokak, Meram/Konya, Turkey tourbantr@gmail.com tourbanproject.org 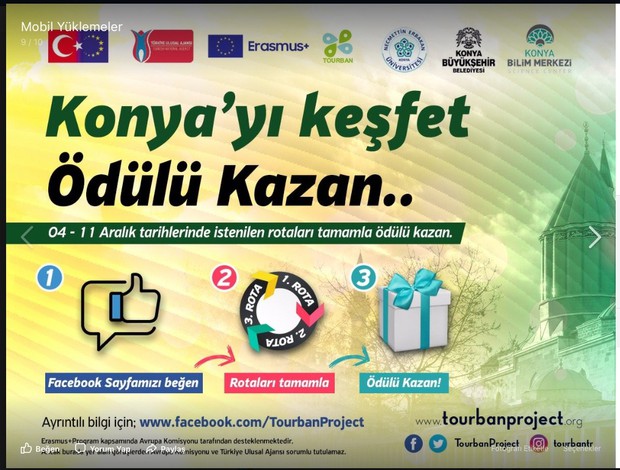 “Funded by the Erasmus+ Program of the European Union. However, European Commission and Turkish National Agency cannot be held responsible for any use which may be made of the information contained therein.”
Paste in your blog/website to embed.