Did you know that the Okapi is endangered? They are being killed, for skin and meat. Since they have been discovered until now, about half of the population has disappeared. There are only 25,000 of them right now. In only 18 years half of them are gone. Does this mean in 18 years from now there will only be 12,500 of the Okapi’s left? Like the giraffe they are endangered. You will read about how they are similar to giraffes, their unique characteristics, their habitat, and how how they are going extinct. 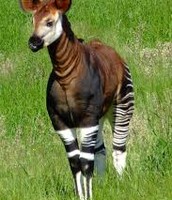 An Okapi eating leaves off a tree. Did you know that Okapi's eat 40-65 pounds of leaves, twigs, and fruit everyday?

Similarities to the Giraffe

The Okapi, is actually the only living relative to the giraffe, and despite the markings, they are very similar to each other. Both have a prehensile tongue to pull leaves and twigs off trees. The head also looks very similar to the giraffe, also the ears as well look like a giraffes catching sounds that other animals have a hard time hearing. In addition to their similarities they are both are ruminants (animals that are even toed ungulate mammal, that chews the cud regurgitated from its rumen.) These are the similarities between the Okapia johnstoni and the Giraffe. 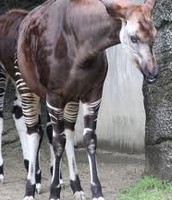 This is an Okapi, the photo shown next to this picture is to show the similarities of the Okapi and Giraffe.

This is a Giraffe, the photo to the left of this picture is to show the similarities of the Giraffe and the Okapi.

Their markings look like a zebra’s stripes, located on the front legs and hindquarters of the Okapi. Despite their stripes the zebra markings can actually help the Okapi’s camouflage by hiding in partial sunlight that filters through the rain forest. In addition to helping the Okapi’s hide, the stripes help young ones be able to track and follow their mother, as well as full grown okapi. Another special feature of the Okapi is their fur, on rainy days they can keep dry because the fur is oily. Despite the fact that the fur is oily it is soft like velvet. The fur is a purple like color or reddish brown, the fur is also very thick. And though they are very similar to the giraffe-- they are short, so they can avoid obstacles like tree branches, roots, and trunks, unlike the giraffe who would have a hard time avoiding those obstacles because of how tall they are. To add to the similarities they have small horns, covered in skin.

The Okapia johnstoni’ senses make them a very cautious animal. And they have phenomenal hearing, Okapi’s can hear humans coming towards them, and they tend to run away. They are very cautious animals, therefore making it hard to study them. Despite the fact that it’s hard to study the Okapi’s researchers believe that there are about 25,000 Okapi’s in the wild. And as a result of their good sense of hearing they can hear noises that other Okapi’s make that other predators and humans cannot hear. To add to their great sense of hearing they also have a great sense of smell. And just by checking the ground, Okapi’s know if another animal or something else has passed through their territory. Just imagine if you had senses that worked that well!

The most common place where you can find Okapi’s are in Africa. The places where you can most commonly find Okapi’s are in: central, eastern, and northern Democratic Republic of the Congos, north and east of the Congo River to Maiko forest, north of Ituri forest, west through Rubi, Tele and Ebola river basins, and extends north to the Ubangi River. Even though this sounds like a lot of land, it is only 383,190 km2 of area, but some of the land is unsuitable for the Okapi. For instance some of the unsuitable lands are, degraded forest, urban areas, and swamp forest. Because of unsuitable lands the Okapi’s really only have 244,405 kilometers squared of land. As a result the population of the Okapia johnstoni is going down. 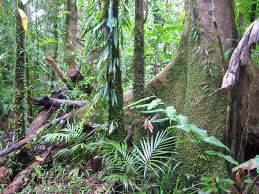 The Okapi’s are on the endangered list and they need our help to keep the population up. And they are already extinct in some places, such as Uganda. The Okapi’s population have been declining since 1995 because of severe threats, and nothing is being done to help. Did you know that the Okapi population has declined 50% from 1995 to 2013? So in 1995 there were probably around 50,000 now there are only around 25,000 Okapi’s. Deforestation, forest degradation, and people settlement are taking away a lot of the Okapi’s range. Okapis are being hunted for meats and skins. And to add to the reasons for extinction, illegal groups kill Okapi, these illegal groups hunt, poach, and mine illegally. On the other hand there are ways you can help save the Okapi’s. Such as going to a website and donating money, every little bit helps. You can go to

http://www.savetheokapi.com/ to donate and learn more about the Okapia johnstoni.

Think about it, just one person like you could make the first step to helps the Okapi’s. The quote from Dr. Seuss from The Lorax, “Unless someone like you cares a whole awful lot, nothing's going to better. It’s not.” So remember that if you want a change in the world you have to take that first step and do something about it. You could stop people from building homes in their territory, and save the innocent beautiful Okapi’s from going extinct.