Get email updates from Tanya:

To confirm a diagnosis of ulcerative colitis, most patients will need to have either flexible sigmoidoscopy or colonoscopy. Both procedures involve the use of a small movable camera and a light to view the insides of your large intestine. During either procedure, a biopsy may be done. In a biopsy, small samples of tissue are clipped from the lining of the intestine so that they can be examined under a microscope for signs of inflammation. Tests for parasites and for bacterial infections will be done. Blood tests will be done to check for a low blood count or low iron levels, which can occur in ulcerative colitis. Blood tests also can help to detect inflammation. Blood tests should be done to check on your liver because inflammation of the liver ducts (called sclerosing cholangitis) occurs in some people with ulcerative colitis.

The medicines that commonly are tried first are a group of anti-inflammatory medicines called aminosalicylates. These medicines are chemically related to aspirin, and they suppress inflammation in the gut and in joints. They are given either by mouth or directly into the rectum, as a suppository (a waxy capsule that is inserted into the rectum) or an enema (liquid that is squeezed from a bag or bottle into the rectum). Some medicines in this group include sulfasalazine (Azulfidine), mesalamine (Asacol, Pentasa, Rowasa) and olsalazine (Dipentum). These medicines clear up symptoms in most people, but you may need to receive treatment for three to six weeks before you are free of symptoms.

Other, more powerful anti-inflammatory medicines are helpful, but they suppress the immune system, which causes an increased risk of infections. For this reason, they are used less often for long-term treatment. These medicines include prednisone (sold under several brand names), methylprednisolone (Medrol), budesonide (Entocort), azathioprine (Imuran), mercaptopurine (Purinethol), infliximab (Remicade)and cyclosporine (Neoral, Sandimmune).

Surgery is used in people who have severe symptoms that are not controlled by medicines, who have unacceptable side effects from medicines, or who have a very high risk of colon cancer because of extensive inflammation in the whole colon. One of several surgeries may be used to treat ulcerative colitis, depending on the amount of colon that is affected. Either part of the colon or the entire colon can be removed. After some surgeries, bowel movements will have to leave the body through an opening called a stoma in the abdominal wall. The stoma replaces the function of the rectum, and may be connected to a drainage bag. It may be used temporarily or permanently. Newer surgical techniques allow many patients to keep the layer of the rectum that contains its muscles, even though the lining of the rectum needs to be removed. This type of surgery (called ileoanal anastomosis, or pull-through surgery) has a cosmetic advantage, and it allows bowel movements to pass through the rectum and to be near normal, except that bowel movements are more frequent (usually five to six times per day) and contain more liquid.

Ulcerative colitis can affect people very differently. Many people have only mild symptoms and do not require continuous treatment with medicines. Others might require multiple medicines or surgery. Unless it is treated with surgery, this disease is a lifelong condition.Ulcerative colitis requires people to pay special attention to their health needs and to seek frequent medical care, but it does not prevent most people from having normal jobs and productive lives. As is the case for any chronic illness, it can be helpful for a person newly diagnosed with ulcerative colitis to seek advice from a support group of other people with the disease. 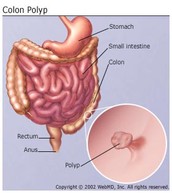 "If tests show an abnormal area (such as a polyp), then a biopsy to check for cancer cells may be necessary. Often, the abnormal tissue can be removed during a colonoscopy or sigmoidoscopy. A pathologist checks the tissue for cancer cells using a microscope.

Colon and rectal polyps are important, since some may turn into colorectal cancer over time. It is important to recognized that while not every polyp turns to cancer, experts believe that colorectal cancer typically begins as a small non-cancerous polyp. Fortunately, during a colonoscopy, these polyps can be identified and removed or destroyed--thus preventing colorectal cancer. If a polyp is large enough, tissue can be retrieved and sent for biopsy to determine the exact type of polyp."

There are four types of polys:

"Bleeding and infection after surgery, urinary retention, leakage from the surgical site, and pain may occur after surgery. Complications from chemotherapy and biotherapy depend on the agents used, but may include nausea, vomiting, diarrhea, inability to fight infection and allergic reactions. Radiation therapy may cause skin reactions or burns, mechanical blockages (strictures), bleeding and radionecrosis (tissue destruction due to the radiation energy)."

"Survival rates are often based on previous outcomes of large numbers of people who had the disease, but they cannot predict what will happen in any particular person's case. Knowing the type and the stage of a person's cancer is important in estimating their outlook. But many other factors may also affect a person's outlook, such as the grade of the cancer, the genetic changes in the cancer cells, the treatment received, and how well the cancer responds to treatment. Even when taking these other factors into account, survival rates are at best rough estimates. Your doctor can tell you if the numbers below may apply, as he or she is familiar with the aspects of your particular situation."

Follow Tanya Shaik
Contact Tanya Shaik
Embed code is for website/blog and not email. To embed your newsletter in a Mass Notification System, click HERE to see how or reach out to support@smore.com
close