Get email updates from Reese:

The Lion and the Monkey

The Lion and the Monkey

THE LION AND THE MONKEY

"I, George, am the King of the Jungle, and I order all of you to bow down to me!" George the Monkey said.

The big brown, elderly lion, with a dark brown mane that formed a crown atop of his head, Sumba, usually did not come out of his hut, he only came out to hunt for his family. But one day, a brave little frog hopped on in to Sumba's hut and reported how George has been acting and treating the other animals. Sumba didn't want war, he wanted to end this monkey's craziness in a non-violent way. He had a brilliant, but simple, plan.

Every jungle animal loved Sumba, and they wish they could see him more often. As Sumba walked out of his hut, every animal rushed and praised him and left George alone. George was upset at first, but he soon realized why nobody ever wanted to talk to him or be around him. Lion was being warmly welcomed, and George decided to say hello, bow down to Sumba, and give him a big, nice, warm hug. He was told by Sumba to apologize to each and every animal personally.

Something that you might think is fun or cool, might be not so fun or amusing for someone else. 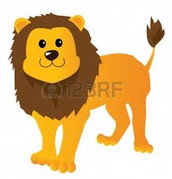 The Real King of the Jungle!

A little monkey who finds amusement and fun in mischief!

YOU GET WHAT YOU'RE ASKING FOR

George was acting mean and bossy to everyone, and he was pretty much asking for everybody to turn away from him. Something that you think is fun and cool, might not be so amusing and fun for everybody else. He finally apologized to the other animals, and they became friends.