Knute is using Smore newsletters to spread the word online.

Get email updates from Knute: 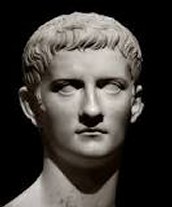 Caligula ruled from 38 to 41 AD. Killed many people. He tortured and killed people in front of the victim's family. Ordered construction of his own building and his statue to be built in the temple of Jerusalem. Was going to war with Britain and decided to collect sea shells instead. Caligula was stabbed to death by family and Praetorian Guard. The Romans erased all memory of him.

Ruled from 14 to 37 AD. Had military experience. He lead Rome to conquer Pomania. Was a bad emperor. He was murdered in 37 AD.

Knute is using Smore newsletters to spread the word online.