Get email updates from Pierce: 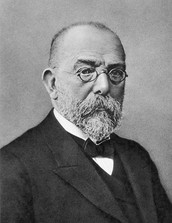 Robert Koch ( December 11th 1843 – May 27 1910) was a celebrated German physican and pioneering microbiologists. The founder of modern bacteriolgy , he is known for his role in identifying the specific causative agents of tuberculosis, cholera, and anthrax and for giving experimental support for the concept of infectious disease.

Koch excelled in academics from an early age. Before entering school in 1848, he had taught himself how to read and write. He graduated from high school in 1862, having excelled in science and maths. At the age of 19, Koch entered the University of Göttigen, studying natural science.

1. Bacteria is spherical,spirals,threads, and short rods.

2. Bacteria can be found anywhere

3. The main place bacteria is found is off of dead animals.

4. Bacteria is useful to recycle garbage.

5. The most useful bacteria is coli it helps with digesting food.

1. He showed in a convincing way that microorganisms cause disease in humans.

2. He provided the fundamentals for microscopic pathology.

3. He made the first photomicrographs of bacteria.

4. He found the known cause of bacterial disease.

5. He was a great scientist who taught people things they did not know about bacteria.

6. His work paid off because without him people would not know anything about bacteria.

From my numerous observations, I conclude that these tubercle bacilli occur in all tuberculous disorders, and that they are distinguishable from all other microorganisms. -Robert Koch