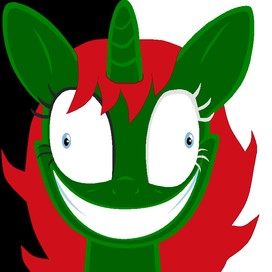 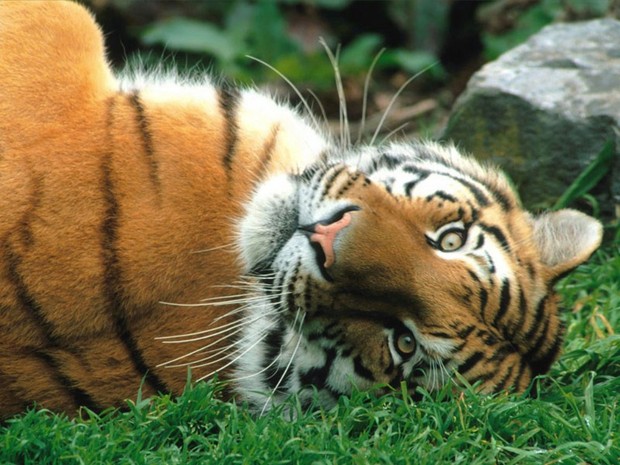 The Amur Tiger is the largest of all the supspecies of tigers and is the biggest to ever exist. As their name indicates, they are from Siberia. This is the only habitat they are found in now because they were killed in Asia and Russia over the years. The Amur tiger is also very genetically close to the other species of tiger that are already exticnt, and many expect that this may be their future too. Despite what most people think, there are actually very few accounts of the Siberian Tiger attacking humans in any type of setting. But, because of their size and appearance many people think they are intimidating. This could also be because of a tiger escaping a zoo in 2007 and it killing a person because that person pestered it throughout the day. This got much media attention and gave many people the impression that these particular tigers want to eat humans when that is not the case. The Amur tiger produces on average 2.4 cubs every 21 months, but about 50% of the cubs die before reaching one year of age and whenever their mother is poached. 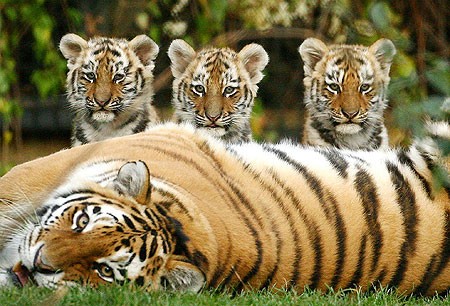 This tiger can be up to 11 feet long and weigh about 650 pounds, the equivalent to a man is 6 feet tall. They have colorful stripes and are extremely fast animals, despite their huge size. The Siberian tiger is extremely strong and powerful and is often found as a symbol in popular culture. But this also makes them a huge trophy for certain hunters that want the thrill of finding an animal that they can kill. The Siberian tiger has reddish-rusty or rusty-yellow fur, with narrow brown stripes. The fur of the Siberian tiger is moderately thick, coarse, and sparse. It's back legs are a longer than it's front legs to help it jump high and has a fairly long tail. The longest male Siberian tiger, "Maurice", measured 309 cm in total length and the longest femal Siberian tiger, "Maria Ivanna", measured in 270 cm in total length. This shows that the Amur tiger is longer than the Bengal tiger and the Africal lion. Because of the low biodiversity the Siberian tiger has, it is not wise for them to inbreed, this could lower thier biodiversity and make it difficult for their cubs to be like normal tigers. Sometimes inbreeding can cause a mental defect in the cubs, making it difficult for them to survive. Many people have tried to breed them with other tigers in captivity and it seems to be the only way to save the subspecies.

The Siberian Tiger Climbing a Tree

The Siberian Tiger Taking a Look Around

The Siberian tiger is a tiger subspecies and inhabits mainly the Sikhote Alin mountain region with a small subpopulation in southwest Primorye province in the Russian Far East. The Amur tiger lives in the Russian Far East that stretches from the south to the north for almost 1,000 km. They also are seen within the Eastern Manchurian mountains, that crosses into Russia from China at several places in the southwest Primorye. More than 90% of the population is seen in the Sikhote Alin mountain region. An unknown number of tigers survive in reserve areas around the Baekdu mountain, based on tracks and local sightings. About 85% of the tiger's diet consists of red deer, wild boar, and sika deer, so managing these species is vital to tiger conservation. Each female Amur tiger needs about 250-450 km of space, so the largest protected area within the tiger range (4000 km) shelters only 10-15 tigresses. 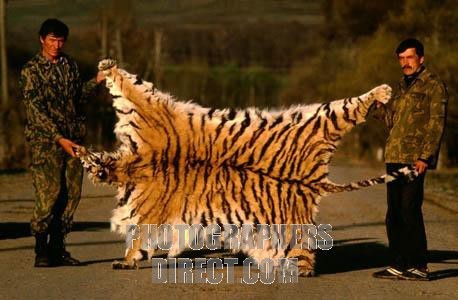 Hunting and poaching are the biggest reasons why these great beasts are becoming extinct. Because the Siberian tiger lives in isolated areas of the mountains, it is hard to make sure that such actions don't happen. But, there isn't enough manpower to keep poachers and hunters out of the areas the Siberian tiger is found. A genetic sampling of 95 wild Russian tigers found were marked with low genetic diversity, with the population size extraordinarily low in comparison to the census population size, this population is behaving as if it were just 27-35 individuals. Since 90% of the population is found in the Sikhote Alin mountain region and the fact that there is little movement of tigers across the development corridor, that separates this subpopulation from the much smaller subpopulation found in the southwest Primorye province. From 2006-2007, the winter was marked by heavy poaching. Poaching of tigers and their prey is considered to be driving the decline in the population of the species, although heavy snows in the winter of 2009 could have biased the data.

In the early years of the Russian Civil War, both the red and white armies based in Vladivostok nearly wiped out the local Siberian tigers. And in 1935, when the Manchurian Chinese were driven back across the Amur and the Ussuri, the tigers had already left from their northern and western range. The few left in the East Manchurian mountains were cut off from the main population by railroads. Until 1947, tiger hunting was legal in the Soviet Union and in the mid 1980's it was estimated that the Siberian tiger population consisted of approximately 250 animals. But, in 1987 the law and order almost broke entirely due to the impending dissolution of the Soviet Union. This made it easier to bribe park rangers to once again poach the Siberian tigers. 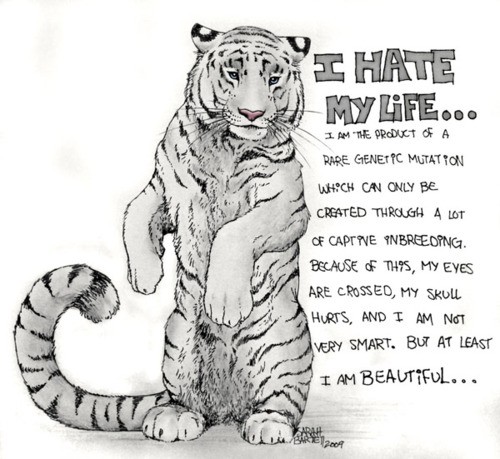 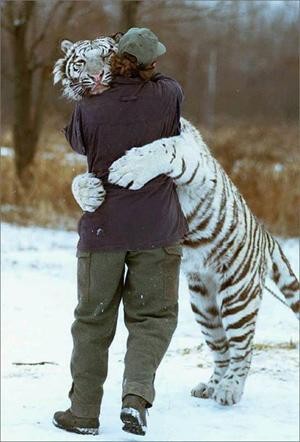 Why Some Siberian Tigers are White

White tigers don't come from a particular species, but are mutant forms of the existing orange tiger variants. They are not considered endangered, but they are extremely rare to find in the wild. A vast majority of white tigers have been selectively bred in captivity. White Siberian tigers are made when a Siberian tiger mates with Bengal tigers carrying the gene for white coating. White Siberian tigers also have bright blue eyes, a pink nose, and black stripes instead of brown. One of the most famous White Siberian tigers was made by a mixed Siberian and Bengal parentage. He is named Taj and was born at Henry Doorly Zoo in 1984. Since he is a hybrid and has Siberian and Bengal haritage he can't be included in the Tiger breeding program. White tiger are a result of a double recessive allele in the genetic code. This is extremely rare to find and in the wild only one in 10,000 births would make a White tiger. White tigers are found to be made by inbreeding, and with the persistant inbreeding taking place, genetic problems are happening and are being amplified resulting in high morality rates and severe disabilities.

About 80% of white tiger cubs die from serious birth defects because of inbreeding, which is necessary to make a white coat. If any survive they have apparent birth defects, like retinal degeneration, strabismus (cross eyes), scoliosis of the spine, cleft palates and clubbed feet. Most of the white tigers who survive suffer from these defects and only rarely does on of the cubs come out fine. Other physical problems that are related to these tigers include mental impairments like unpredictable behavior and depression. It is not only disturbing but also inhumane to make these tiger inbreed with each other.

The White tiger is extinct in the wild because it lacks the natural camouflage of normally colored tigers and most of those born are killed by predatores as they are young and vulnerable, because they stand out. And if they somehow survive to adulthood they have a hard time hunting for the same reason, lack of camouflage. Not only that but, they are also hunted down for their beautiful fur and organs. Tiger body parts are most sought-after for their use in medicine and exotic cuisine. According to the IUCN, there are about 4000 tigers left in the wild. 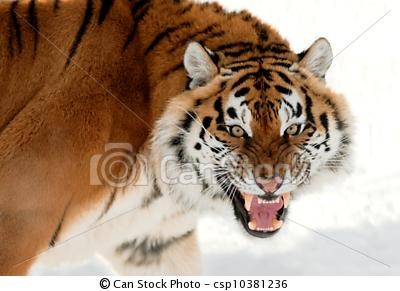 There are only about 350 Siberian tigers left in the wild, with 95% of them in the Russian Far East. The largest protected area, in the tiger's territory, is the Sikhote-Alin Bioshpere Reserve. It is a 400,00 ha reserve that has been a stronghold for the Amur tiger since it was born in1935, and is home to over 30 tigers today. In 1992 the WCS, in cooperation with the Sikhote-Alin Reserve began intensive studies of tiger ecology under the Siberian Tiger Project. Today it is the world's longest running radio-telemetry based tiger research and conservation effort. This project's goal is to collect the best possible scientific info on tiger ecology to try to conserve the Amur tiger. They have studied more than 60 tigers through the use of radio-tracking since 1992. They have consistently made sound conservation recommendations based on comprehensive knowledge of tiger ecology and the role of tigers in ecosystems of the Russian Far East. 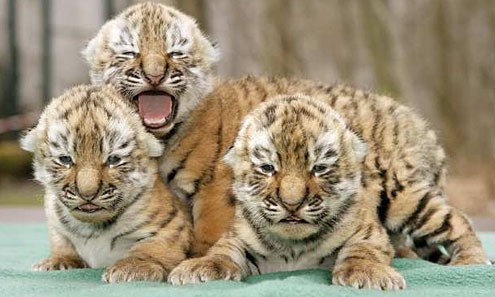 Why Should We Save the Siberian Tiger?

Removing one element from a fragile ecosystem can cause long lasting effects on biodiversity. It can impact the local communities, habitats, and other species which share the tiger's home. The tiger is at the top of the food chain in all ecosystems it lives in, because of this it keeps down populations of deer, wild pig, antelope, and gaur. Without them, these prey species would expand and overpopulate. This would then ravage their main food source, grass or other vegetation. If the vegetation in jungles were devastated, smaller animals and insects would not survive there. This could lead insects to the crops in farmlands, causeing vital food sources to be lost, and a huge impact on the human race. If plants can't grow in the jungle anymore, the soil would become infertile and the jungle, along with all that depend on it, would fade away.

There is also several species that live along side the tiger like: the Brown bear, Sloth bear, Sun bear, Dhole, Elephant, Clouded leopard, Amur leopard, Lion tailed macaque, Musk deer, Orangutan, Rhino, and Saola. These animals are also endangered and fighting for their own survival. 5 out of 8 subspecies of tigers live in some of the most spetacular parts of the world that provide a home for these animals. 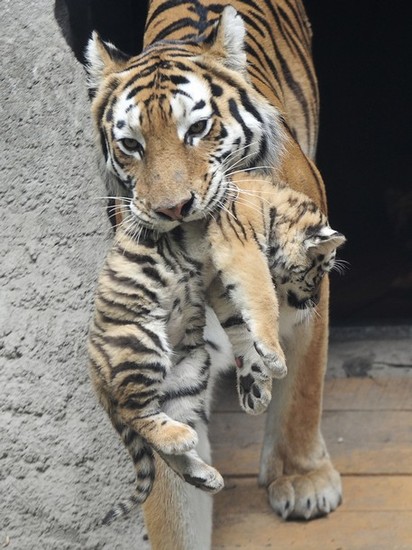 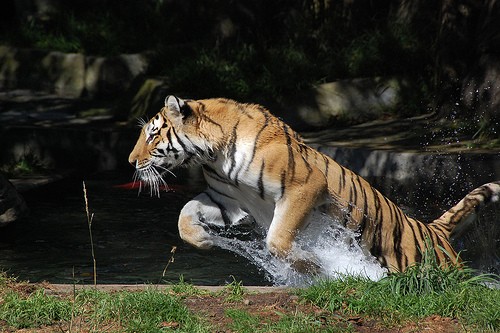 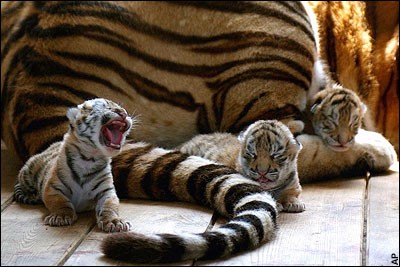 Follow Summer Shade
Contact Summer Shade
Embed code is for website/blog and not email. To embed your newsletter in a Mass Notification System, click HERE to see how or reach out to support@smore.com
close