Monsters; Some Good, Some Evil

Monsters; Some Good, Some Evil

One thing I learned from doing these projects is how to make a ballad. I had no idea how to make a ballad and I never knew what the rules were to making a ballad. Making the ballad was the most difficult part out of all the projects because I didn't know what to type and making the words rhyme while keeping it correct was very hard. On the other hand, making the diary entry was fun and easy and I feel like I did very well on it because after I had finished typing it up, I was happy with what I wrote and it has many details from Beowulf that connected well. If I got to do one more project, I would do a t.v. show script because I feel like it would be fun coming up with what the characters say and do, and my imagination could roam free.

The Ballad of Grendel's Mother and Beowulf

Beowulf goes into the fight with his sword, but the sword doesn’t work against Grendel’s mother. Beowulf has to find another way to kill her, and then he finds a giant-made sword and uses that to kill Grendel’s mother. The theme is that battles don’t always seem as easy as they do, sometimes the hero have to find other ways to win.

The character that I made up, Hyndsel, is retelling that Grendel and his mother was killed by Beowulf, but Hyndsel is saying that Beowulf is being unreasonable and ignorant by killing the monsters because the monsters are just doing their jobs. The theme is that in most stories, monsters are always evil and never good, but maybe the monsters actions are justified because we never hear or see the monster's point-of-view.

In The Pardoner’s Tale, three rioters search for Death because, an old friend of one of the rioters, was killed supposedly by Death, and they want revenge. When the rioters go look for Death, that Death was nearby by an old man and immediately went to the spot that was explained. Instead of finding Death, they find bushels of gold-florins and discuss how they will split it. Long story short, they kill each other, the youngest by stabbing and the last two by poison. The theme for my wanted poster is that, when you look for Death, Death will find you first and you will reach your own demise. 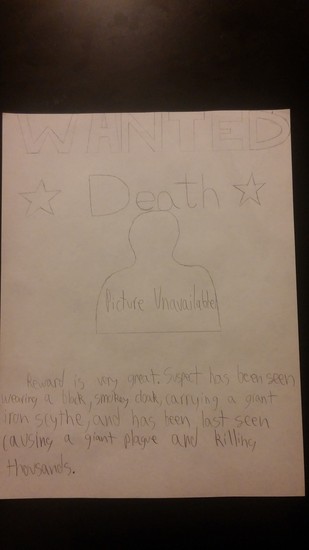