Get email updates from Jacey:

A Day in the Life of Skakespeare

A Day in the Life of Skakespeare

It is unclear on the exact date of when the famous poet and playwright, William Shakespeare, came into this world. Historians know that he was baptized on April 26, 1564 and are able to generalize that he was born on, or around, April 23, 1564. Scholars acknowledge this date as Shakespeare's actual birthday. This man was the third child of six of John Shakespeare and Mary Arden. Scholars seem to think that William went to the King's New School in Stratford.

William Shakespeare married Anne Hathaway on November 28, 1582, in Worcester, in Canterury Province when he was 18 and his bride was 26. They had 3 children together.

After the birth of his last two children, Hamnet and Judith, the next seven years of his life were undocumented. These years are called the "lost years." 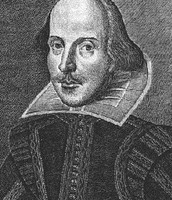 The Actor and the Playwright

It is proposed that Shakespeare arrived in London around 1588 and started to establish his career. As a skilled actor, Shakespeare acted and wrote for the Lord Chamberlain's Men (the King's Men) and was a managing partner in the operation. Working with Will Kempe and Richard Burbage, the group became a favorite London troupe, performing for royalty and made popular by theatre-going public. His company was the most successful in London in his day.

William Shakespeare published and sold "penny-copies" to the more literate of his audiences. By 1597, 15 of the 37 plays that Shakespeare had written were published.

By 1599, Shakespeare and the King's Men had built their own theater known as the Globe.

Some of Skakespeare's works include A Midsummer Night's Dream, Much Ado About Nothing, The Tempest, Hamlet, Macbeth, Othello, Romeo and Juliet, etc.

Because of all his success, William Shakespeare was able to buy New House and retire in comfort in Stratford in 1611.

Shakespeare died on April 23, 1616, his supposed birthday. He was interred at Holy Trinity in Stratford on April 25.

In 1623, John Heminges and Henry Condell, two working companions of Shakespeare's from the King's Men, printed the First Folio edition of his collected plays.

William Shakespeare's legacy will forever live on through his marvelous works.