The war of 1812 was because the British were stilling the ships and sailors of americans. The british were fighting on the border of Canada and America. The war started in 1812. Because we were trying to get rid of british impresment. 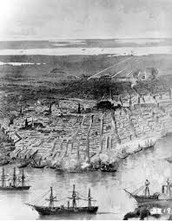 www.history.com
Shortly after gaining its independence, the United States goes to war with England over its seizure of U.S. ships and sailors.