Genial is using Smore newsletters to spread the word online.

Get email updates from Genial:

Folders are not coming home today. They will come home double stuffed on Thursday before Spring Break.

Smile and Greet Everyone You See Today!

Give as many compliments as you can to others.

Be extra kind and include everyone you possibly can.

Be extra helpful in the cafeteria today.

Mrs. Close's Class - Module 5 tests have been corrected and returned to students. Please sign the test and have your child bring it back to school on Monday. We've begun Module 6. There are around 16 lessons that give students their first opportunity to explore decimal numbers as they relate to decimal fractions. We have completed Topic A which was solely based on working with tenths. The kids took the Topic A quiz and that will be returned next week. On Thursday we ventured into hundredths, which is Topic B. During the upcoming week, we'll complete Topic B and review the March CML and Math Olympiad. Keep those exit ticket corrections coming my way!

Mr. Dittmar’s Class - At the time of writing this, we are just over the halfway point of Module 5. This week, we have learned multiple strategies on how to compare fractions. The kids have shown that they know how to pick the right strategy, whether it’s finding like denominators, finding like numerators, or even using cross multiplication, to compare fractions. Knowing different strategies, and knowing when to use, them is perhaps one of the most important skills your children can learn. During the past two days, we have been learning how to add and subtract fractions with like denominators. In these addition and subtraction problems, your children have had to decompose improper fractions into mixed numbers, as well as compose mixed numbers into improper fractions, to solve them. Starting next week, we will begin to finding fraction equivalence greater than one and compose and decompose fractions greater than one. Once we come back from Spring Break, we will continue to work on module 5 as well as incorporate practice test questions and discuss strategies for the state test.

Ms. Gleason's Class - We are working in our fractions module. Your child has learned to find equivalent fractions and compare fractions. This week we added and subtracted fractions. Next week we will convert between improper fractions and mixed numbers. We will end the unit with multiplying fractions. This unit will take us until the end of April. After spring break we will also spend some time on test taking strategies for the state test coming up in May.

Corrected magnetism & electricity assessments will come home Thursday. That unit wraps up our 4th grade work. We will spend the remaining weeks of 4th grade reviewing for the NYS Science Assessment. The written part of the test covers material from k-4th grade.

PAWS - As you might have noticed, I changed the look of the PAWS assignment sheet. I really wanted to the kids to value the checklist that was on it. However, I observed many kids just checking them off to earn the point and many kids NEVER used it and lost a point. So, as part of monitoring and adjusting, I just removed it. In its place, I put the grading sheet. No new PAWS until after the NYS ELA. The next task will be assigned on Monday, April 16th.

Picture Book Friday - Jack entertained us all with The Day the Crayons Quit. Definitely one of my favorites! Bella will read to us on Thursday!

The Revolutionary War - It's up next! 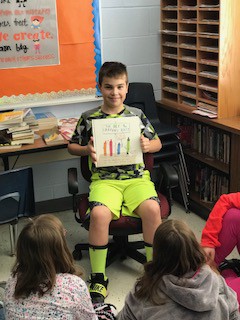 Students will need to be prepared with instruments on Tuesday for lessons and Wednesday for ensembles.

Genial is using Smore newsletters to spread the word online.